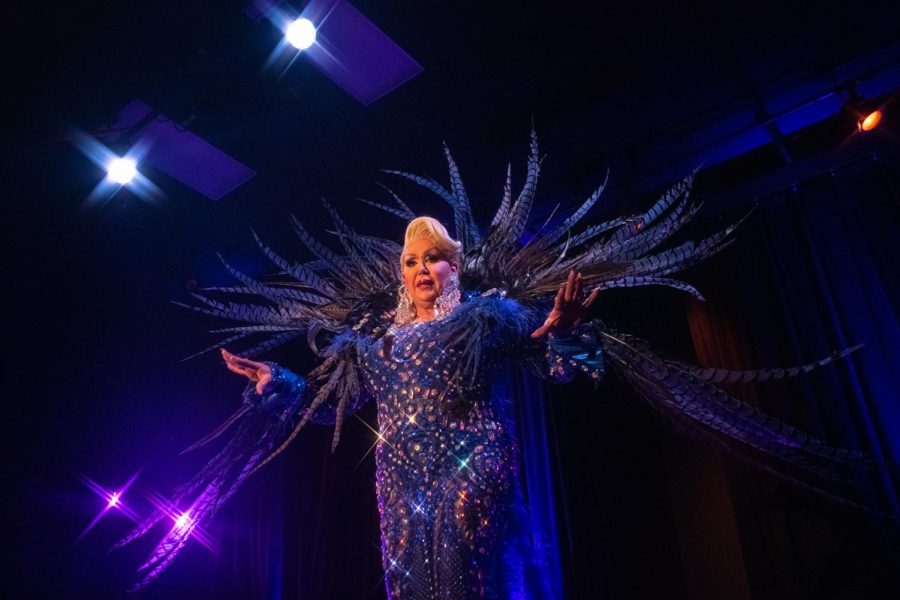 Jodie Santana comes to the stage during the Spooktackluar Halloween drag show on Friday, Oct. 29, 2021 at the Varsity Center in downtown Carbondale, Illinois.

Fabulous costumes and performances drew in crowds from across the Southern Illinois region to the historic Varsity Center for a night of games and entertainment.

The Varsity Center in Carbondale hosted a Halloween themed drag show on Oct. 29, which sold out all available tickets online prior to the pre-show opening.

The Halloween show featured drag kings and queens from as far as Paducah, KY. The host of the night was queen Christina Garnette and proclaimed “Godmother of Drag” Blanche DuBois served as the night’s emcee.

“A lot of people are intimidated by drag queens, drag kings or gay people in general,” DuBois said. “When they leave here, they’re always accepting, and they can teach their children to accept and love everybody.”

DuBois said drag performances typically sell out at the door if not beforehand. She said she enjoys entertaining audiences, and likes the over-the-top costumes and glamor.

DuBois said drag shows are held monthly at the Varsity Center and occasionally held at the local bar, Hangar 9. Other shows are held in Royalton and Hurst, Ill.

The night began with lip synched acts from the performers showcasing unique costumes and providing additional souvenirs to patrons for $1 donations like bags of candy, plush toys and flowers.

Candy, snacks and alcoholic beverages were available for purchase at the inhouse concession stand and included specialty halloween themed drinks.

The night was broken into three sections with audience participation events giving patrons time to interact with Blanche and the other performers. The first event was a game of musical chairs with a game for children 12 and under and a game for adults, each with gift cards for prizes for the victors.

The night also included an audience costume contest. All who wished to participate were invited to the stage, where they gave their name and what their costume was intended to be before presenting to the night’s staff serving as judges.

Faim Lee Jewls’s performances were accompanied with rock music and props which would splash the front row audience members with fake blood.

“I’ve been on stage consistently for the last 15 years,” Jewls said. “I’ve been all the way to Pennsylvania, Arkansas, Missouri, Tennessee, Kentucky. I’ve performed in several states all over.”

Jewls said he organizes shows out of Harrisburg and routinely travels around Southern Illinois to perform wherever anyone wants to hold a show. He said whenever a show is available he tries to have DuBois make an appearance.

“Working with Blanche, she’s the mother of all drag in Carbondale,” Jewls said. “She’s a living legend in Carbondale, and we’re both reigning king and queen for Southern Illinois right now for Pride.”

During breaks in the performance, Jewls could be seen making himself available to the audience. He would talk and take pictures with audience members, and encourage them to purchase tickets for upcoming shows early before they sell out.

“I enjoy entertaining, and being on stage,” Jewls said. “I enjoy seeing the crowd and their reaction, and knowing they’re having a good time.”

Jordan Maynor was an audience member at the show. He has previously attended shows in Carbondale, and was pleasantly surprised to see the different types and age groups of people in attendance.

“I thought it was interesting seeing such a wide variety of people at the show,” Maynor said. “Drag is something that’s sometimes hidden away, as if it’s adult-only. But everyone there, of all ages, was having a great time.”

Maynor said he enjoyed the halloween theme, atmosphere and costumes.

“October, Halloween in particular, is my favorite time of the year,” Maynor said. “I’m always a fan of a good costume contest, and I love seeing the work people put into their costumes.”

The costume contest began shortly before the intermission. It featured students and adults displaying their own costumes with a cash prize for the top three contestants. Judges decided the winners during the intermission and announced them at the end of the break.

The first place winner, dressed as a Disco Barbie and Ken pair, received $50 in cash. Second place was a steampunk beaked plague doctor with suit, mask and matching cane and received $35. The third place winner wore a Chucky doll costume and won $25.

A fourth honorary winning contestant was dressed as an alabaster doll, and received free candy and soda from the concession stand and a free Varsity Center tee shirt.

The acts continued after the intermission with the king and queens all performing another song and dance number. After the last round of performances DuBois gave the curtain call, and gave the audience a chance to applaud them.

The night of celebration finished out with all the performers coming onto the stage and inviting the audience to dance and sing along to “Time Warp,” a song from The Rocky Horror Picture Show.

DuBois thanked the audience and the Varsity Center for allowing the event, giving special thanks to Executive Director Cara Recine and President of the Board of Directors Bill Robbins. Additional shows will be hosted at the Freedom Bar in Hurst, IL on Nov. 6 and at Hangar 9 on Nov. 13. Additional drag shows will take place at the Varsity Center on Nov. 19 and Dec. 17.

“We definitely want to thank the Varsity here, and thank Cara and Bill for having us here,” Blanche said. “When we didn’t know if it would take off when we first did it, but we really appreciate them.”