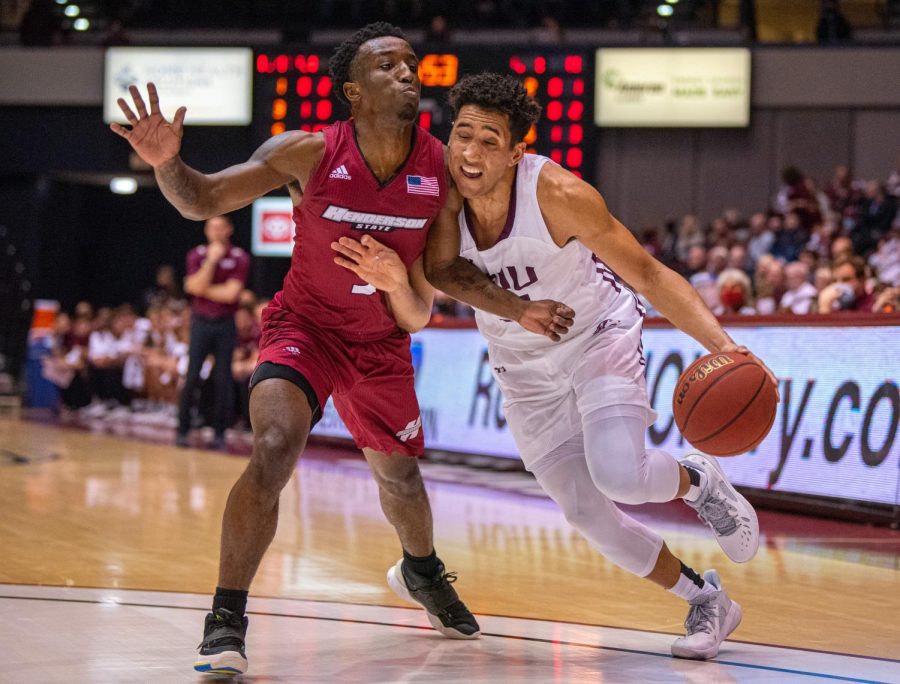 SIU guard, Dalton Banks, drives into a Reddies defender during the Salukis' 66-52 win during an exhibition game against Henderson State on Tuesday, Oct. 26, 2021 at the Banterra Center at SIU.

The SIU Men’s Basketball team handled their first exhibition game of the 2021-22 season with a win against Division II Henderson State 66-52.

The Dawg Pound was back in full force as Tuesday’s match marked the first time students were able to fill the stands in 608 days since the ongoing COVID-19 pandemic began. Junior forward Marcus Domask said the Dawg Pound is greatly appreciated by the team.

“I kinda forgot what it was like to play in front of Saluki nation. There were a lot of people here for an exhibition game. They make it so easy just to play so hard and give it your all when they’re on their feet cheering. We appreciate it a lot,” Domask said.

Even though the game doesn’t count towards the standings and is only an exhibition game, Domask said the team was ready to show the fans what they’re capable of.

“Honestly I don’t even think we need a message to get fired up. We were talking in our group chat last night about how we needed to come out and play hard and get the win. Coach didn’t need to get us fired up for this game. We were ready,” Domask said.

The performance for Domask was encouraging considering he spent most of last season out with a leg injury. Jones said the rhythm is a whole lot better when Domask is on the court.

“It was great to have him back. I feel like the ball moves more and we’re more versatile with him playing mid-post. It’s good to have him back because it makes our team more dominant as well,” Jones said.

The team is encouraged with the win, but there won’t be any overreactions about it. Jones said the team isn’t looking forward to anything too far in the future of the season.

“We have to take it one game at a time. We won’t be satisfied with today’s win. We still have a lot of things to get better on and take those steps and do whatever is necessary to take this one game at a time,” Jones said.

Tonight also gave many new members of the team a chance to prove themselves. Jones said all the new members impressed him tonight.

“I couldn’t say one specific person impressed me tonight of the new guys. I feel like everybody played good. J.D [Muila] played with a lot of enthusiasm tonight. Even though Scotty [Foster] went 0-4 tonight, he did a lot of good things on defense. Troy got some great offensive rebounds. I feel like everyone of those guys played hard and to the best of their abilities,” Jones said.

The Salukis came out roaring and never let back. The team was already leading by double digits within the game’s first seven minutes and never trailed throughout the game. A 15-1 run midway through the first half helped SIU put this one out of reach early and ended the first half up 42-21.

Coach Mullins said the team was efficient throughout the first half.

“First half I thought the guys were really focused, I thought the ball was moving offensively and defensively we were taking away the paint,” Mullins said

The Salukis marched on in the second half and kept the lead at double digits. They were up by as much as 26 at one point. Coach Mullins was able to rest his starters for the latter half of the second half considering the enormous lead. However, the lead shrank as the game came to a close and Mullins said some more easy mistakes were being made.

“Second half we turned the ball over a lot and it gave them a lot of offensive opportunities as well. There’s a lot of great film that we’lll be able to watch and show our guys to get ready for Arkansas Little Rock I think,” Mullins said.

Even with the mistakes, SIU managed to cruise to a 66-52 win on the night. Coach Mullins said the game was a good early season test before things begin to pick up during the regular season.

“We wanted a good team for this exhibition and wanted to challenge ourselves and find out some things about us. It did all that to get us ready for the season opener. I think there will be a lot of valuable lessons that we can take with us,” Mullins said.

The Salukis will play again two weeks from today with a trip to Little Rock for the season opener and a 5 p.m tip-off.