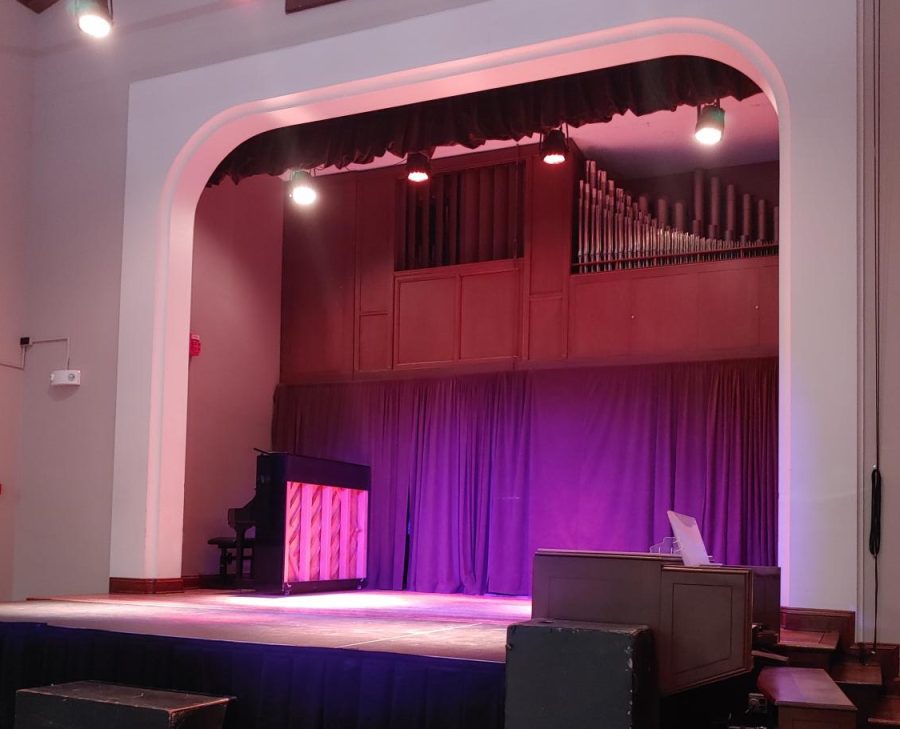 The anticipation was thick in the air of the performance hall of the Old Baptist Foundation as FIERCE! prepared to put on its first showing in two years.

FIERCE! performed “Magic To Do” from Oct. 21 to Oct. 23. The group is a student-led Registered Student Organization (RSO) at Southern Illinois University (SIU) founded in 2015.

Performances by the RSO were put on hold in 2020 due to the COVID-19 pandemic while the school moved to a remote learning style. The cast and crew are wearing masks for all 2021 performances and ask all in attendance to wear masks as well.

“Magic To Do” is an original production written and directed by the president of FIERCE!, Nini Xiong. Xiong is in her fourth year pursuing a bachelor’s in Musical Theater. Auditions for the production took place on Sept. 10 and 11.

“We had to get the script done in three days because we had auditions, and started casting people the following week,” Xiong said.

Xiong said the RSO consists of approximately 20 students including performers, choreographers and technical crew. She said she enjoys overseeing the group, and encourages other students interested in theater to join.

“This group is an opportunity for everyone to perform,” Xiong said. “I love it because it’s student-run, and it’s open to anyone who wants to try theater, not just for theater students.”

The play itself is a “jukebox musical,” meaning its story is original but uses songs from other media in the place of original music. The musical tells the story of a trio of children taken on an adventure to the world of Illumination, a parallel world where magic has been locked away in the Book of Magic. The trio, Lilly, Sage and Clark, embark on a quest, aided by the Light Lady, to prevent the Book of Magic from falling into the hands of the Dark Lord.

The production had live music, performed mainly on piano, and choreographed dances on stage and in space made between rows of seating, which immersed the audience in the scenes.

From start to finish, “Magic To Do” was high-energy, and excelled at maintaining the interest of the audience. Each member of the cast contributed speaking lines to the story, and many of the music selections were taken from recognizable productions to draw the audience into the fun.

Coley Zralka is a third year transfer student from the University of Illinois Urbana-Champaign (UIUC). She is in the Art Education program at SIU, and this was her first production with FIERCE!

“I transferred here during COVID, so I’m excited to be signing up,” Zralka said. “It’s mostly music and theater majors here, but all people are welcome.”

Zralka said she was unable to perform for two years, even during her time at UIUC, due to COVID. She said she performed three or four productions each year before the shutdowns, and appreciated the opportunity FIERCE! gave her to perform again.

Abby Ohlau is a first year student pursuing a bachelor’s degree in musical theater. She was cast to play Lilly in the production.

“It’s almost like family here,” Ohlau said. “It’s nice that it’s all students, and everyone gets to do what they want to as opposed to having professors direct things and tell you what to do.”

Ohlau said she expected the audience to enjoy the unique experience. She also expected people to look at this showing and recordings for any future performances of the production.

“It’s really interesting, because no one’s ever performed this before,” Ohlau said. “But, it’s lots of fun, and a good show. I’m proud of Nini. She did very well on it.”

Hayden Hotchkiss is a first year student in musical theater, and performed in productions throughout his schooling career.

“I think FIERCE! is awesome because I wasn’t able to be a part of any other productions,” Hotchkiss said. “It’s great that, even as a freshman, I get to be a part of a show when a lot of schools don’t even allow that for first year students.”

Hotchkiss said FIERCE! is a good place to get started if one is interested in musical theater.

“This is a great way to get started or keep your skills fresh,” Hotchkiss said. “It’s an especially kind, caring and supportive atmosphere.”

Carolyn Ridler played Clark in the production of “Magic To Do.” She is currently a second year student studying theater performance and this is her first year as a part of FIERCE!

Ridler said the previous year only included one official production by the theatre department at SIU, with FIERCE! remaining inactive in the 2020 year. The year’s theater department performance, called “New Faces 2020”, consisted of several small, virtual performances to acquaint watchers with the new students  in the school. The production was performed via Zoom and shared a common theme of conspiracy theories.

With the return of FIERCE! this school year, and with Xiong taking the position of president, Ridler said the RSO  feels very organized.

“I’m very surprised by how professional it is,” Ridler said. “I wasn’t really sure what to expect going into it, but going throughout the rehearsal process I was very excited and pleasantly surprised to see it was just like any other theater production I’ve done.”

Ridler said she appreciates the professionalism and dedication of Xiong in her position as director and president.

“I knew that Nini was the director, and that she would be running this, so I had the expectation that it would be well run,” Ridler said. “I have a lot of respect for her.”