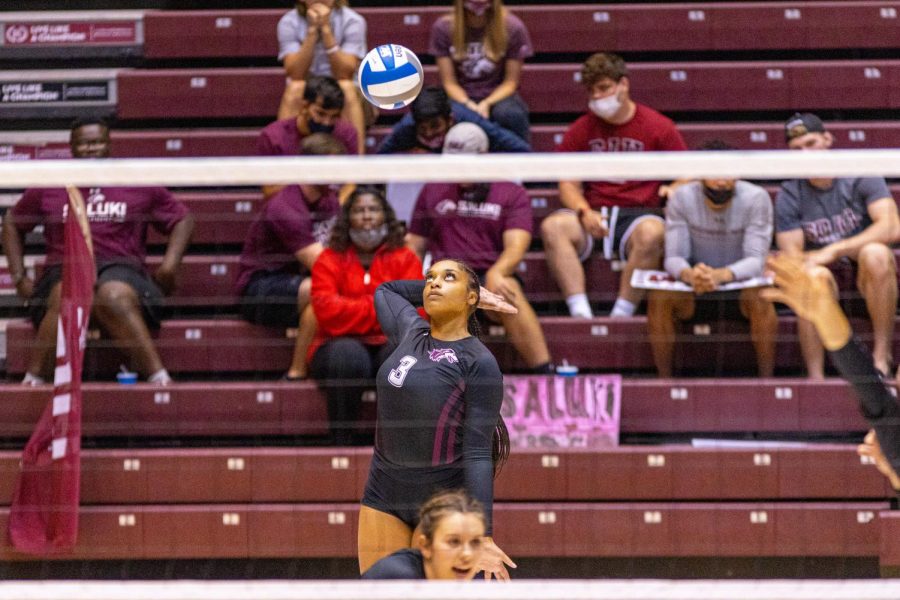 Alex Washington watches as the ball as she begins to bring her right arm back for the serve during the Salukis 3-0 win over the University of South Carolina - Upstate on Friday, Sept. 10, 2021 during the Saluki Invitational at the Banterra Center at SIU.

The Salukis never held a lead in the first two sets, only managing to tie the first set twice in the first four points before Valpo pulled away. The second set was particularly dominant for the Beacons, winning the first five points of the set on their way to a nine-point set victory.

The third set began just as the last had; Valparaiso jumped out to an early 5-0 lead. However, SIU managed to climb their way back thanks to a 7-0 run to take their first lead of the match. The Saluki lead peaked at 13-10, before Valpo came back to tie the set. The teams would trade points back-and-forth until Valparaiso broke off another five-point run to finish off the set and the match.

The Salukis will return home for back-to-back weekend matches at home against Illinois State (12-11, 8-3 in MVC) – who swept SIU earlier in the year – and Bradley (11-11, 7-4 in MVC) – who previously beat SIU in five sets – on Friday and Saturday.