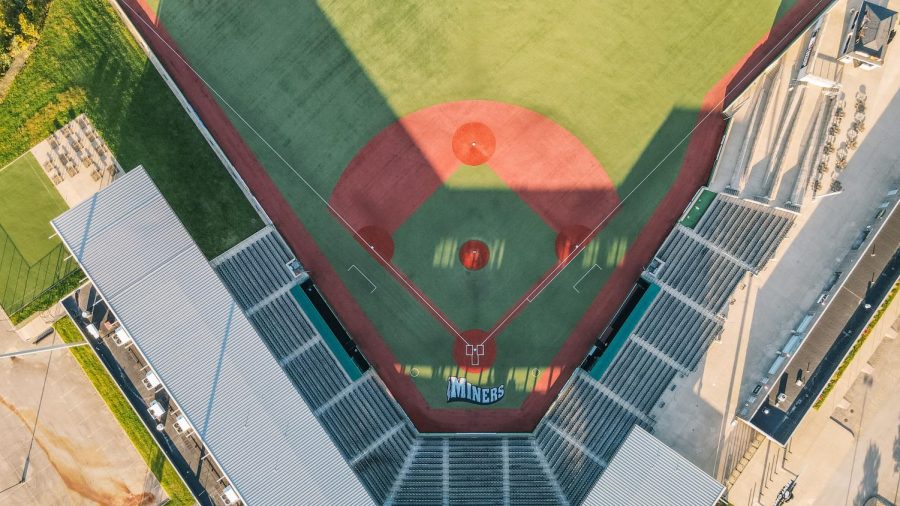 Rent One Park sits empty Oct. 17, 2021 in Marion, Ill. On Wednesday October 6, 2021, the owners of the Southern Illinois Miners, Jayne and John Simmons announced their retirement from professional baseball.

Marion, Illinois has seen its last days of professional baseball, as the Southern Illinois Miners have decided to cease operations and fold the franchise. This comes as the owners of the franchise, Jayne and John Simmons, decided to retire from ownership to spend more time with their children and grandchildren.

The announcement was first made on Oct. 6 through a post on the team’s website with a statement by the owners giving thanks to those that made the franchise what it was.

“This is a bittersweet decision for us,” Jayne or John Simmons said. “We love the Southern Illinois community and our family roots run deep here. We appreciate the years of support we have enjoyed from baseball fans, civic leaders, business owners, vendors, and the city of Marion. We are at a time in our lives where we really would like to spend more time with our children and grandchildren”.

However, the decision did not come without efforts to continue the team legacy through a different owner. Team manager and Chief Operating Officer Mike Pinto said every option to send the team to a different owner was considered.

“There were a lot of conversations and almost everything that could be done had been investigated. It wasn’t that they were just going to retire and shut this thing down. They wanted to look at the options they had currently in front of them. Unfortunately, selling the team was not an option at this time,” Pinto said.

The Miners were part of the Frontier League of professional baseball, an independent partner league with the MLB. The team has brought over 60 players into Major League Organizations since its  inaugural season in 2007 and has seen great success over the years, including earning “Frontier League Organization of the year” three times and winning their first league championship in 2012.

Pinto said he was disappointed  to hear about the loss of a great franchise .

“I felt a lot of sadness at first to hear that something so great that was built over the last 14 years would be no more. The Miners were one of the premier franchises in all of independent baseball in the U.S. We accomplished some really great things, so it’s sad that the legacy wouldn’t continue,” he said.

Pinto has seen the Miners grow from the start as he was the manager throughout all of the Miners’ 14 seasons. In that time, the Miners accumulated seven total playoff appearances, four division titles, and, of course, their lone championship.

Although the decision was extremely saddening to hear for many, it was also expected by some. Pinto said the final decision by the Simmons’ was not a surprise to him as much as it may have been to some players and others in the community.

“I knew they had a desire to downsize their investment portfolio and start watching their grandchildren grow up instead of managing the businesses. They had an awful lot of money in Southern Illinois with the team all these years and I think, at that point, they deserved to be able to retire and I certainly understand the decision,” Pinto said.

Many of the players will begin to feel the effect of the move in the upcoming days, with each hitting free agency immediately. But third baseman Ian Walters was fortunate enough to have his path set out for him. He was traded to the Washington Wild Things less than 24 hours before the announcement that the team would fold. He said he was grateful to not have to go through the free agency process like many other players will have to.

“I was pretty grateful because it put me in a position where I didn’t have to sit there and find someplace to go or to have to reach out to different coaches and stuff and tried to find a new place,” Walters said.

Walters was one of the stars of the team this year, hitting a final batting average of .286, an on-base percentage of .376, and a slugging percentage of .409. Walters was very familiar with baseball in the Southern Illinois region, playing collegiate ball at SIU Carbondale and at Rend Lake junior college before that. Walters is also a native of Paducah Kentucky, which is less than an hour’s drive from Marion. Walters said he greatly appreciated the opportunity to play so close to home.

“Just about every game I’d see a familiar face. My parents would come to games all the time and even my teammates from SIU and buddies from Paducah would come and watch. It was a lot of fun for me to be close to home and have those familiar faces in the stands,” Walters said.

Not only players will be affected. Concessions workers, field managers, kitchen workers, entertainment squads, video producers, and even mascot workers will feel the loss

Director of Production Jon Weaver already had plans of moving beyond the Miners after this latest season. Weaver said shuttering the team will leave a huge hole all around.

“It’s just a real big loss for the community, especially Southern Illinois University to not have that extra opportunity for communications students to do interns. I had a lot of great interns from SIU over the past two years and that really helped create the Miners production team what it was,” Weaver said.

Getting work experience as an intern or other positions with the Miners could really open a lot of doors for future jobs in higher positions for people. Weaver said working for the Miners has opened up some more opportunities for him in the future should he decide to explore those.

“I got to know a lot more people in the league and helped it grow in the offseason a little bit when MLB did the partnership agreement with the Frontier League. Working there definitely opened up some new doors to continue working in minor league baseball if I want to pursue that in the future,” Weaver said.

Weaver said losing the team for a little bit might help some of the people in the area realize how important having a baseball team might be.

“People also might not realize what they have until it’s gone. As someone who loves minor league baseball, I always thought having a baseball team in a community like where I did growing up was a huge aspect of a community. Southern Illinois will definitely see the loss of the Miners baseball team as future summers continue,” Weaver said.

One thing to be certain is that many people across Southern Illinois will be affected by the empty dugouts. . Whether that be fans, players, coaches, employees, or businesses that partnered with the team, the Miners will be missed by many.