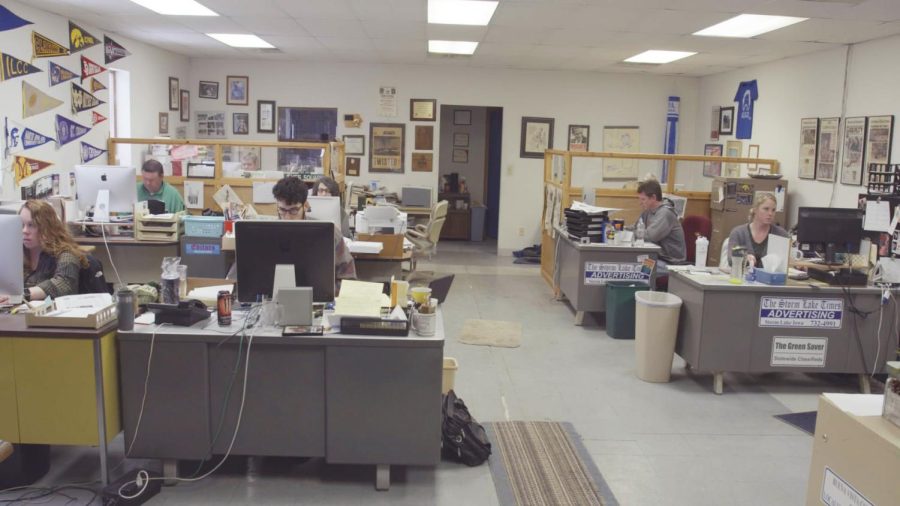 At the Storm Lake Times, five of the 10-person staff are members of the Cullen family.

A small town is about as strong as its newspapers and its banks, according to the Pulitzer Prize winning editor of  Storm Lake Times, Art Cullen. His family’s newspaper, and what it means to his town, is the focus of the documentary “Storm Lake,” screening Oct. 26 from 6-8 p.m. at the Guyon Auditorium inside Morris Library.

The film launches this season’s Indie Lens Pop Up series, which brings people together for in-person and virtual film screenings, and community-driven conversations about documentaries that will be broadcast on the PBS show Independent Lens.

This particular conversation about small-town newspapers is certainly relevant for the people of Carbondale and the surrounding area. Nearly 2,000 local newspapers have been shut down over the last 20 years, leaving many communities without the reporting that ties its people together, and without the spotlight that shines into the darkest corners.

“Without strong, local journalism to tell a community’s story, the fabric of the place becomes frayed,” Cullen said in the film.

Hundreds of counties in the U.S. are currently without a newspaper, according to journalism scholar Penelope Muse Abernathy, who describes these areas as “news deserts.” She said it leaves communities with, “limited access to the sort of credible and comprehensive news and information that feeds democracy at the grassroots level.”

The newspapers that do remain are facing a financial crisis. As more people turn to their phones to get the news, more newspapers are being left in the racks. Fewer people subscribe to get their paper delivered and online subscriptions bring just a fraction of the money.

Likewise, as readers shift to online viewing, fewer advertisers are paying for print ads, which traditionally have been the financial life blood of a newspaper. The differences in rates between print ads and online ads is so extreme, it’s become known as the dollars to dimes dilemma.

No small town community journalists are getting rich off of their work, least of all the Cullen family, which was happy to turn a mere $2,000 profit the year this documentary was being filmed. After all, a profit, no matter how small, is infinitely better than a loss.  The Storm Lake Times is, overall, a break-even venture, Cullen said in the film. It is truly a labor of love.

Journalism is a labor of love for most of the people practicing it. Rank and file journalists do it for the love of the story,  love for their community and  love for an informed democracy.

Democracy in action is a highlight of the documentary, which focuses in part on how the Storm Lake Times covered the 2020 Iowa Caucuses. We also see how the newspaper kept going even as the town became caught up in the COVID crisis, becoming an epicenter of the epidemic.

“Thankfully, the people of Storm Lake are more fortunate than so many other communities around the country. Despite their struggles, they are connected by their biweekly paper, in part because hometown journalism is nothing short of a mission for all the Cullens,” said the film’s Director of Photography Jerry Risius.

Then, there are the smaller stories, the ones that capture the essence of small-town life. These include a profile of a factory worker trying to make it big as a singing contestant, and the pig who went to school, wearing a diaper, to help the children learn all about a pork producer who is a pivotal part of the town’s economy.

Such articles may seem quaint to those living in large cities, but they are the type of stories that bring neighbors together. They are a far cry from the coverage so readily, and unfairly, decried as “fake news.”

Journalists like Art Cullen and his family aren’t plotting the demise of one political candidate or another. They are not deeply embedded in a conspiracy theory to control the masses. They focus on facts, not fear; on the truth, not some tainted version of it.

“Our hope is that, through the story of the Cullens and their paper, we might inspire viewers to care more deeply about their own local news source, if they’re lucky enough to have one, and community,” Storm Lake Director Beth Levison said. “Maybe a newspaper really is something that can unite us, and not divide us.”

The Indie Lens Pop Up Screening of Storm Lake is open to the public. The documentary will be broadcast on PBS Nov. 15 and streamed at video.pbs.org from Nov. 15 – Dec. 14.