Carbondale locals weigh in on scariest, spookiest places in town 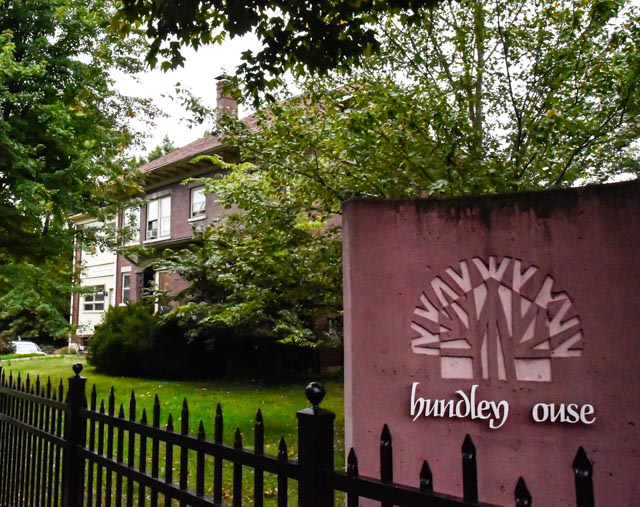 A sign reading “Hundley House” sits in front of a known haunted and spooky house Oct. 12, 2021 in Carbondale, Ill.

During the hallowed month of October, spirits and ghosts may wander about Carbondale where residents say they’ve sighted the restless undead.

The Daily Egyptian released an online questionnaire which asked respondents to reveal what they think are haunted locations in town, and whether they believe in ghosts.

In the questionnaire, graduate student Jesse Snider said lots of places in Carbondale are probably haunted, but only one stood out.

“The spookiest place in town is my house because it’s full a’ ghosts,” Snider said.

Some of the places respondents commonly said were the most haunted are the Hundley House, Faner Hall, Shryock Auditorium, Altgeld Hall and Oakland Cemetery.

Rylee Peterson, a Carbondale local, said Southern Hills is the spookiest place in town because it looks like a post-apocalyptic nightmare field.

For Victoria Kreher, a Carbondale local, the university is the spookiest location because ghosts can be seen roaming the halls of buildings.

Scott Thorne is the owner of Castle Perilous, a gaming and comic book store.

“The spookiest place, before the University pulled it down, was Sunset Haven,”  Thorne said in an interview.

The university pulled down Sunset Haven because too many people were going in there and poking around, Thorne said, because “it used to be the county poor house.”

There are still unmarked graves where the building used to be, Thorne said.

“The most likely place to see something weird is the railroad tracks down by Boskydell and Makanda, and then the American Bottoms, even though that’s not in Carbondale,” Thorne said.

“I think one of the spookiest places in Carbondale is the Hundley House,” Kreher said.  “One of the ghost hunter shows filmed in Carbondale several years ago went there.”

Gray said there was a very creepy vibe when he visited the upstairs apartment.

The Hundley House was the sight of a double murder when  J.C. Hundley and his wife Luella were shot on December 12, 1928. Nearly a century later, the murder is still unsolved.

“What is a ghost? Energy? A soul? The manifestation of phenomena based on belief?” Gray said.

SIU-C student Tiffany Young said she believes in demonic energy, but not ghosts.

Gray said other haunted places in town include the Kleinau Theatre at SIU-C and Oakland Cemetery.

Lawrence Gaydos, a Carbondale local, said his mother lived in a very active house haunted by ghosts, and the spookiest place is the crawl space underneath.

“I also think the attic under the roof of my house is haunted,” Gaydos said.

Ellee Fillmore, a Carbondale local, said that she believes in spirituality, meaning life existing beyond life on the physical earth.

“The Rain House has unsolved murders and several sightings of spirits,” Fillmore said.

Fillmore said the Amtrak station is another haunted place because a paranormal investigation was done there with several sightings.

Whichever way you believe, there are plenty of local haunts to explore and experience the strange and unknown phenomena of the ghosts of Carbondale.

Staff reporter Joel Kottman can be reached at [email protected] on Snapchat: @joelkottman, on Instagram: @joel.kottman and on Twitter: @JoelKottman