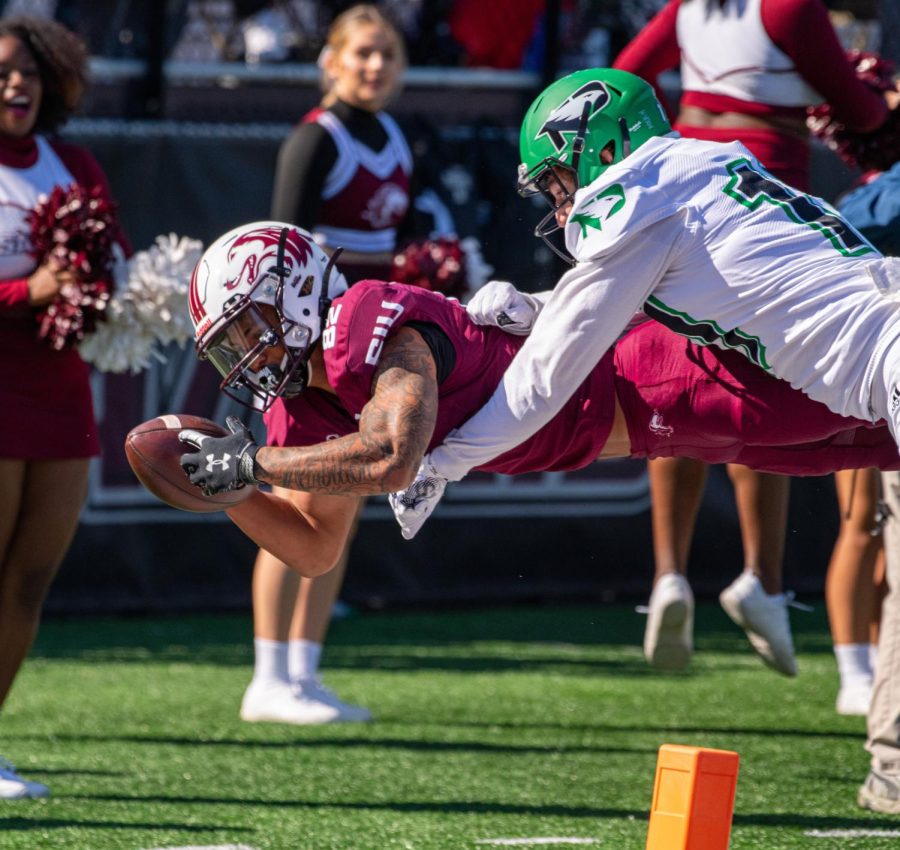 Izaiah Hartrup dives towards the end zone. Hartrup would not score during the play, but the Salukis' would later score during the drive during SIU's 31-28 win over North Dakota during the Homecoming game on Saturday, Oct. 16, 2021 at Salukis Stadium at SIU.

For the third week in a row, Saluki football came away with a close victory. No. 4 SIU improves to 6-1 on the season and 4-0 in conference play. Southern Illinois took down the University of North Dakota Fighting Hawks (2-4, 0-3 in MVC) by a score of 31-28.

At halftime, Claire Waldon and Brandon Goede were announced as 2021 Homecoming Royalty before a crowd of 10,644. This is the best attendance for a Homecoming game since 2013 and best overall attendance at Saluki Stadium since 2016.

Unlike recent weeks, the game was not decided in overtime, but on the final play of regulation, as North Dakota kicker Brady Stevens missed a 47-yard field goal as time expired. The miss came minutes after Stevens’s first game-tying attempt from 36 yards went wide right.

For Stevens, Saturday was his second career game handling kicking duties for the Fighting Hawks, as their regular kicker Adam Stage was out for his second straight game with an undisclosed injury.

As for the Salukis, senior Nico Gualdoni made a career-long 46-yard field goal with five minutes remaining, ultimately the difference in the game.

“The snap and hold were both good,” Gualdoni said. “I was kicking with the wind, so I wasn’t really worried about distance, just kicking it straight.”

Lenoir’s production was limited, only accounting for 51 yards receiving. Part of it was due to the Fighting Hawks looking to shut down the receiver who is always on milestone watch.

“They just had a good scheme,” Lenoir said. “Solid defense, in my opinion, all across the board. But I feel like we really figured it out, and adjusted at halftime.”

The Salukis started out hot, with the aforementioned Baker-to-Lenoir pass and a Spencer touchdown run giving them a quick 14-0 lead in the first quarter. However, in a drive where the Salukis were pinned against their own goal line, Baker fumbled, allowing the Fighting Hawks to recover in the end zone to put them on the board.

Baker found junior Tyce Daniel for a 15-yard touchdown early in the second quarter, pushing the Saluki lead to 21-7. Although they wouldn’t score again for the rest of the half, the defense kept momentum, continuing to hold the North Dakota offense scoreless.

With just over two minutes remaining in the half, the Fighting Hawks opted to go for it on 4th-and-4 from the SIU 16-yard-line. A successful conversion preceded a touchdown pass from quarterback Tommy Schuster to Adam Zavalney to cut the SIU lead in half.

The Salukis pushed to cash in on a free possession with less than a minute before halftime, but Baker threw an interception near midfield to give North Dakota another chance with 26 seconds left. They cashed in as UND’s Jacob Richter made a spectacular sideline catch with eight seconds to go. Schuster found another Fighting Hawk in the back of the end zone to tie the game up as time expired on the half.

“I think our guys know that they can play much cleaner and better,” Hill said. “Some of that, you’ve got to give credit to North Dakota making adjustments and playing good football with good players, but we’ve got to play better if we want to continue to close this out.”

Down two scores, North Dakota had climbed back into the game within a minute, and continued with that momentum into the third quarter with a blocked punt. Despite the excellent field position, the Saluki defense held the Fighting Hawks to a field goal, which they would also block.

Teams traded scoreless possessions throughout the third quarter, until Baker found freshman Izaiah Hartrup for a 58-yard catch-and-run to retake the lead 28-21.

“He hasn’t been himself as far as that explosive, twitchy, fast,” Hill said of Hartrup, who has struggled with injuries throughout the season. “It just tells me he’s tough, that he’s willing to do whatever it takes for the team.”

North Dakota had various chances to respond, with two would-be touchdowns dropped in the end zone by Fighting Hawks receivers. The offense eventually stalled out in the red-zone, turning it over on downs on the first play of the fourth quarter.

The Saluki offense also came up short, and instead of draining the clock, they allowed North Dakota to again take a shot at tying the game. This time, UND leaned heavily upon running back Isaiah Smith, who would account for 111 yards on the ground for the game. Smith led the Hawks down the field quickly, and eventually broke through into the end zone for the game-tying touchdown with 7:30 left in the game.

SIU was once again forced to respond to a game-tying drive, and this time they did, with Spencer breaking off a 48-yard run to set the Salukis up in range for Gualdoni’s go-ahead field goal.

With the win, the Salukis will head into their Week 8 bye with an undefeated record in the Missouri Valley Conference and on pace to win their first conference championship since 2009.

“That’s what you want, as far as you control your own destiny,” Hill said. “The bye week definitely comes at the right time.”

Lenoir mentioned the importance of the late-season bye week, especially after having played a full season in the spring.

“This is such a mature group,” Lenoir said. “We know what this bye week is for. We’re trying to rest up.”

Following their bye week, Saluki football will hit the road to face Northern Iowa (3-3, 1-2 in MVC) in Cedar Falls, Iowa on Oct. 30. Kickoff is scheduled for 4 p.m.