Preacher on campus: “LGBT is going to get barbecued in hellfire” 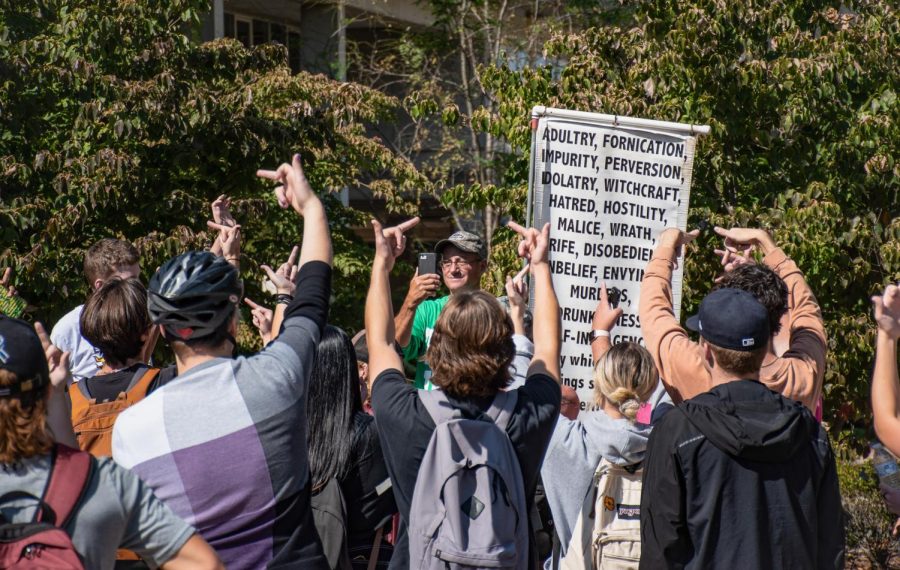 Spectators flip off Brother Matt, a campus evangelist, as he records them while speaking out against members of the community Oct. 4, 2021 at SIU in Carbondale, Ill.

By Oreoluwa Ojewuyi, Editor in Chief

On Monday afternoon outside of Faner Plaza, an evangelist named Brother Matt picketed with a sign that read “‘Thou shall not means you! God is angry with the wicked every day Psalm:11 repent Jesus is the only way truth & life John 14:6.’”

A crowd of students gathered around Brother Matt for about four hours, according to freshman Gabe Largent.

According to spectators, the police arrived around 12:30 as the crowd began to grow.

Brother Matt answered questions of students and also did a sermon and stated some of his beliefs.

Students began to retaliate against Brother Matt as he continued to share his views chanting “God loves the whores!”

Largent said he arrived at Faner Plaza around 1pm.  “He was spewing all of this stuff about LGBTQ people saying they’re going to burn in hell, I just got up there and started yelling the most random stuff to drown out his message,” he said.

“Whenever someone in the crowd wants to say something, I would just yell over him and say ‘Hey this person here has a question,’” Largent said.

Largent said other students gathered around peacefully. Despite this, Brother Matt continued to shout his rhetoric to the crowd.

In reference to the student with the “Gay is OKAY” sign, Brother Matt said, “This young man, who loves butt sex right here- theres a sign here, ‘this trail is not safe to walk on,’ because of people like him.”

On Tuesday Oct. 5 Brother Matt picketed again as students gathered to protest him and his beliefs.

Editor in Chief Oreoluwa Ojewuyi can be reached at [email protected] or on twitter @odojewuy. To stay up to date with all your southern Illinois news, follow the Daily Egyptian on Facebook and Twitter.