Men’s Rugby finding Foundation for the Future of the Program 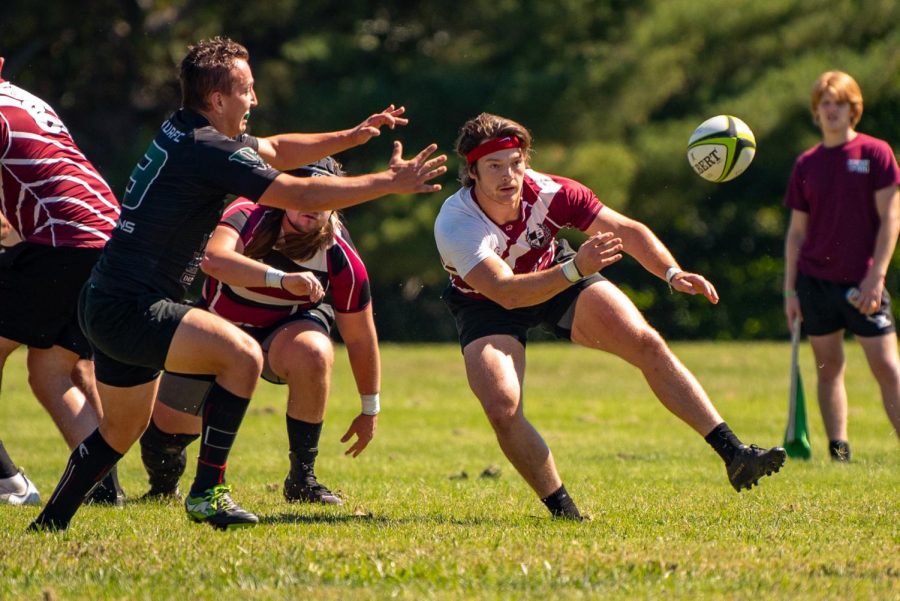 Isaac Jung pitches the ball to a teammate during the match against Washington University on Saturday, Sept. 25, 2021 at SIU.

SIU’s Men’s Rugby club is in the middle of its fall 2021 season, the first one back from a long wait after the 2020 season was called off due to COVID-19 complications.

Although Rugby is unfamiliar to many in the U.S.,  Williams said many of the rules and the format are actually similar to some sports that are very popular.

“It’s a combination of soccer and football, you get the physicality of football with tackling, running, running the ball through people, but there isn’t a stoppage of play. When you’re tackled in rugby, play keeps going, kind of like in soccer where you just straight keep playing,” Williams said.

However, there are differences. Schwenk said rugby takes away some iconic football features.

“It’s American football, but you’ve taken away the forward pass, blocking, and plays, so it’s much like soccer where the ball is always moving. You don’t stop after every tackle to reset the clock, down, and distance. The balls always move and you use backward passes or forward kicks to advance the ball to the end zone,” Schwenk said.

Rugby is unique also in the way that players don’t wear protective paddings, like those in football do, but Schwenk said not to worry about injuries.

“Rugby is actually safer than American football because of the lack of pads and you think it would be the opposite. When you don’t have that plastic armor on, people won’t hit with their heads and won’t run nearly as hard. Whenever you’re tackling and defending, you think about your own body and safety first,” Schwenk said.

Mechanical Engineering Senior and team captain Caleb Schwenk said the loss of an entire year of experience made it that much harder for him to be able to teach the sport to the new recruits.

“I’ve really only had 2 years of fall rugby experience. It’s been a challenge when most of us seniors have two years or less experience. We’re trying to teach brand new guys who have never heard of rugby and trying to build a team that can accomplish just the basics,” Schwenk said.

As the team captain, Schwenk handles the team practices and is in charge whenever players  take the field. He said the team has had to make do with what it has in some instances.

“We are really player-led because we don’t have many real funds or support from the university or anywhere else. We don’t have enough to do full scrimmages, so we run a lot of plays on air, which isn’t the best way to go about it but, until we get some more guys on the field, there isn’t much we can do about it,” Schwenk said.

Team president and senior marketing major Samuel Spangler said the main goal for this season is to have a good start for the first of spring due to some of the challenges they have had to face.

“We have a lot of new guys and we’re all coming together as a team […] If we can get a good base for a solid start in the spring, that would be my main goal,” Spangler said.

“Six out of our 15 starters didn’t even play until four or five weeks ago when the semester started. I’m one of the more experienced players and I’ve only been playing since spring of last year,” Williams said. “So we’re really just getting experience and trying to create that team bond so we can build into the future. We’re not really looking to win a whole bunch of games right now”.

Williams said the team bonding aspect makes people want to join rugby. He said there is a large social aspect to the sport as well.

“We have little socials after each game and drink, eat food and have a good time, even with the other team , ” Williams said.

Spangler said many people, including himself, join rugby to fill a sporting void in their lives.

“After I played football and wrestled in high school, I was looking for a contact sport to play at the collegiate level. I was excited to join the team,” Spangler said.

Williams said he was a bit hesitant about joining at first because of the unfamiliar rules of rugby.

“I was playing and I barely even knew the rules. Going into a new sport that I’ve never touched before was something I was very hesitant about, especially at a higher level like this,” Williams said. “But, I picked it up pretty quickly. I was afraid of making myself look like an idiot because I didn’t know the rules.”

Williams said, even if you aren’t necessarily looking to join rugby, it’s important to make use of RSO’s to network and meet new people.

“While in college, meeting people and networking is super important. One of our alumni came out to practice last week and he said the only people he still talks to out of college are his mates from the rugby team, so it’s about meeting kids you want to be friends with for the rest of your life,” Williams said.