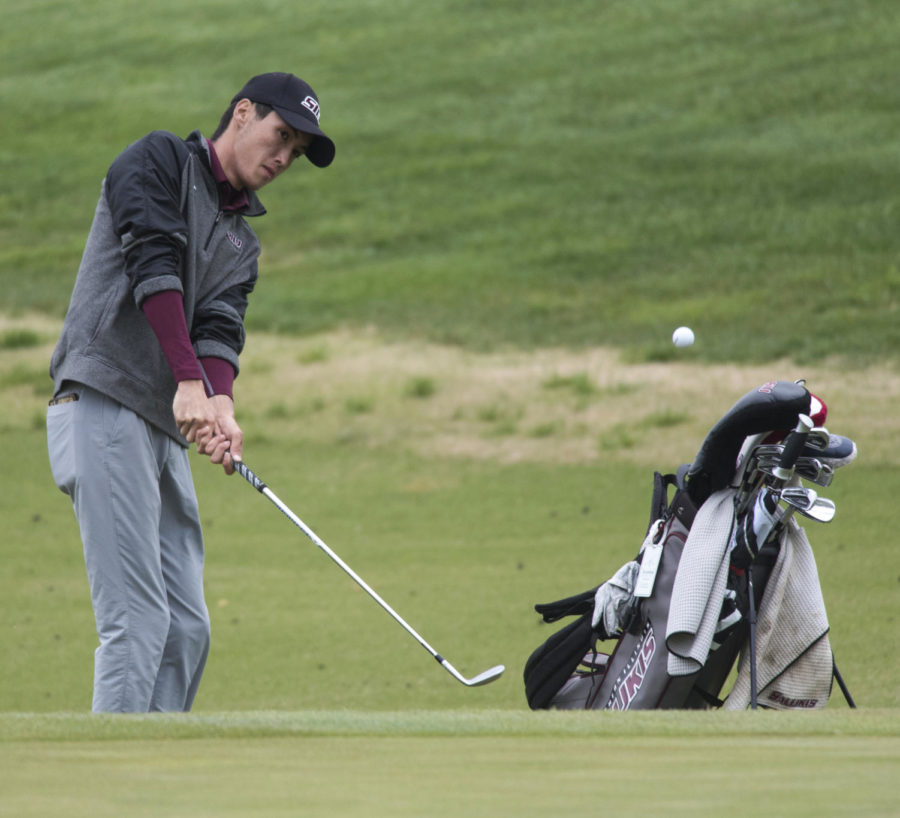 Sophomore golfer Frankie Thomas tries to set himself up for a par putt Tuesday, Apr. 24, 2018, during the final round of the Missouri Valley Conference Championships at the Dalhousie Golf Club in Cape Girardeau, Missouri. (Cameron Hupp | @CHupp04)

The Southern Illinois Men’s Golf team competed in the Zach Johnson Invitational on Sept. 27 & Sept. 28 . This took place in Des Moines, Iowa, and was hosted by Drake University.

SIU’s Senior golfer Matthias Besard took home first place in the invitational. Besard won the tournament with a score of 203. This is his third time placing first in his collegiate career.

He was followed by senior Birgir Magnusson, who placed 23rd and scored 219 points. Sophomore Justin Wingerter and freshman Braden Hoisington also helped the cause, getting 35th and 53rd respectively. Senior Tom Cleaton rounded out the team by getting 76th.

Drake and North Dakota State tied for first in the tournament, both teams had a score of 853.

The Salukis finished with a total of 867, which was good enough to place 5th at the tournament. This was better than their previous tournament, where they placed 9th.

The Salukis travel to Martin, Tennessee for their next tournament. The Grover Page Classic will be hosted by UT Martin and will take place on Oct. 4 and 5.

Sports Reporter Cole Daily can be reached at [email protected] stay up to date on all your southern Illinois news, follow the Daily Egyptian on Facebook and Twitter