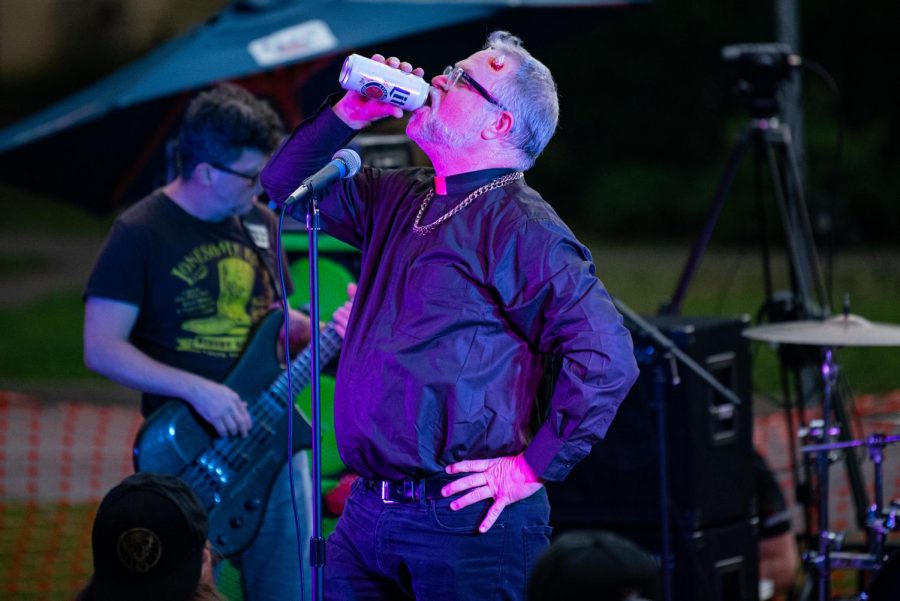 Frank Simpson, vocalist of Action Man, drinks a beer in-between songs during the Lost Cross 35th anniversary event. The Lost Cross House, the oldest punk house venue in America, that sits between Elm and Beveridge was founded by Mikey Snot and Chris Cross in 1986. Lost Cross 35th anniversary was a two-day event that had musical performances at venues across the city on Saturday, Sept. 25, 2021 in Carbondale, Illinois.

After nearly two years without shows, Lost Cross celebrated its 35th anniversary Sept. 24-25 in Carbondale. Bands from all around played shows at The Lost Cross House, The Hangar 9, PK’s.

The Lost Cross House sits on the corner of W. Elm and Beveridge Streets and has been holding shows in its basement since 1986. Basement shows are the backbone of Midwest punk culture and Carbondale has been the home of many basement show houses since the ‘80s.

The anniversary shows were met with enthusiastic crowds, and the energy on the streets of Carbondale was electric. In order to allow for social distancing, all concerts were held on stages outside and people were encouraged to wear a mask.

All of the shows’ proceeds went directly to funding repairs for the Lost Cross House. Throughout the pandemic, artists, venues and people who enjoy live music have been hindered. This anniversary weekend was a celebration of reunion after a difficult year.

Basement show culture in the Midwest was formed as a response to the environment. Adam Fletcher, member of The Copyrights, has been involved with Lost Cross since he was a teenager in 1991.

“We have a perfectly good basement down there that we might as well have a band play,” he said. This ‘do it yourself’ mentality shows the strong will of people who want to enjoy music together.

Basements are an intimate performance space. As shows take place in people’s homes, it calls for closer relationships among people as well as more respect for their surroundings. Basement shows are also a safe space for art. In a basement, there is no criteria for a ‘good’ band and a majority of the people performing do so simply for their love of music.

Fletcher said the Lost Cross basement has held many bands using it as a safe space to practice and grow. “It’s definitely a place for people to practice and hone their skills,”  he said, “I don’t know where we would be if that wasn’t available for us whenever we were younger.

The creation of the basement show houses in Carbondale is credited to the student body of SIU and the need for those students to express themselves.

Mike Kartje, a faculty member and former member of the band Diet Christ said, “The students who were attracted to SIU at the time seemed to be more interested in social activities and prioritized the arts.”

After working hard in academics, students need a way to decompress.The basement shows are an outlet for students to show their creativity and make connections with other students they normally wouldn’t talk to in the classroom. These connections have the possibility to last a lifetime.

Kartje said, “I am still friends with everyone that I hung around with back then.”

Basement shows had to stop during the pandemic. The inability to perform music caused artists from Carbondale and all around to experience a quiet and lonely year.

Rick Carny, a current member of Jesus Christ Superfly said, “After playing gigs for forty years of my life, all of a sudden one thing I looked forward to and was a constant wasn’t there anymore.”

Jesus Christ Superfly played its last pandemic live show in February of 2020 and just recently played its first returning live show this summer before appearing at Lost Cross for the anniversary celebration.

Artists often rely on their music performances financially, and emotionally. Not being able to share their art and have others experience it face-to-face took away the greatest reward an artist receives.

Cam Prokaski and Josey Blumenshine, both freshmen at SIU, were in attendance for the anniversary, admiring the artwork on the walls within the Lost Cross House.

He would later head-bang with the crowd while watching Near Death Experience, a band  formed at Lost Cross.

The weekend was filled with both smiles and tears as people were happy to experience live music again and artists were thrilled  to perform after a tough year of social distancing. Without art, the routine of life, work and school can seem mundane. Musicians, artists and audiences alike showed they are thankful for Lost Cross.

Staff reporter Kiersten Owens can be reached at [email protected] To stay up to date with all your Southern Illinois news follow the Daily Egyptian on Facebook and Twitter.