Off The Rails coming back to Carbondale 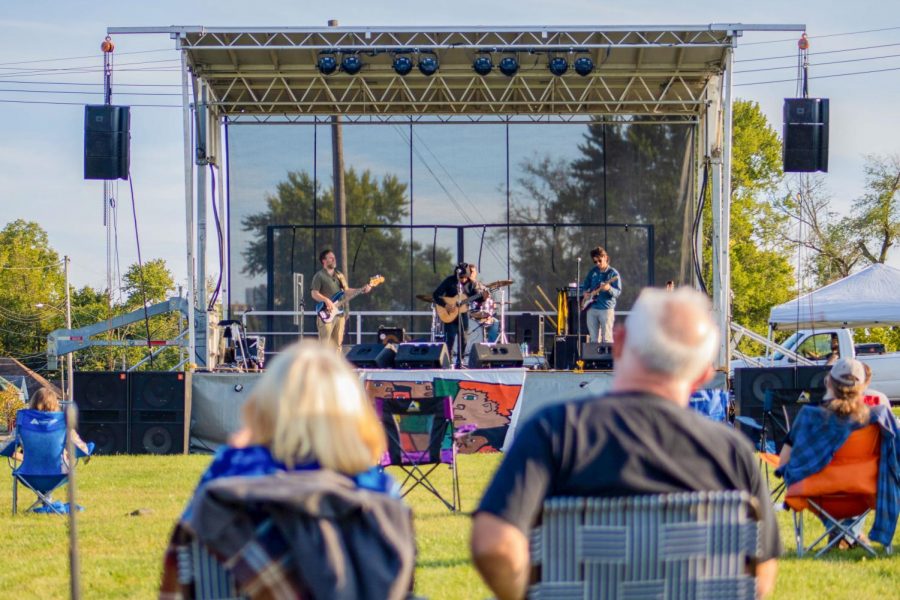 Radio Free Honduras performs music to a field of concert attendees Sept. 24, 2021 at the Off the Rails concert series in Carbondale, Ill.

The concert series Off The Rails made a comeback  Sept. 24 with a new lineup.

For this line up they had Radio Free Honduras, Jason Ringenberg, and Hugh DeNeal and company.

Roni LeForge, the public relations officer, said  she received positive feedback from the attendees that came to the last concert in August.

“The night of the concert we were getting Facebook messages and comments on our page asking when the concert would be,” LeForge said.

Dan Abu-Absi of Radio Free Honduras said that it was their first time performing in Carbondale but anticipated people would enjoy their set.

“We do mostly original music. It is mostly high energy and upbeat and danceable so if people are in a mood to dance then that always makes it a lot of fun,” Abu-Absi said.

Jason Ringenberg, a singer songwriter, who also attended SIU-C said he was excited for people to come out and enjoy the concert.

“It is a great event, in a great atmosphere and it is just really rad… It is a free show. Can’t beat that and a night of music we are gonna have Hugh and the Honduras band and I think it will be a great night of music,” Ringerburg said.

This time around, Off the Rails was not just a concert event it was also one of the events for Spanish Latinex Heritage month.

Cristina Castillo, the coordinator of the SIU-C Latin American Student Association and Hispanic Latino Resource Center, said  collaborating with Off the Rails was a great way to showcase diversity, and bring people together.

“Let’s do something festive Latino you bring in a band which is a Spanish band from Honduras. We have the Latino Student Association from SIU, and so we have the exhibit with all of the items that they brought from the different countries,” Castillo said.

Castillo also said the event is a great way to promote diversity in the Carbondale area.

Castillo said by working with the city and different organizations they can show off the different cultures we have in Carbondale as a way for minority student groups to feel embraced in the community.

“We have more people in the community than the student population and it is really great that they are coming to events like this and so I think that showing that support it is also showing we want more of this,” Castillo said.