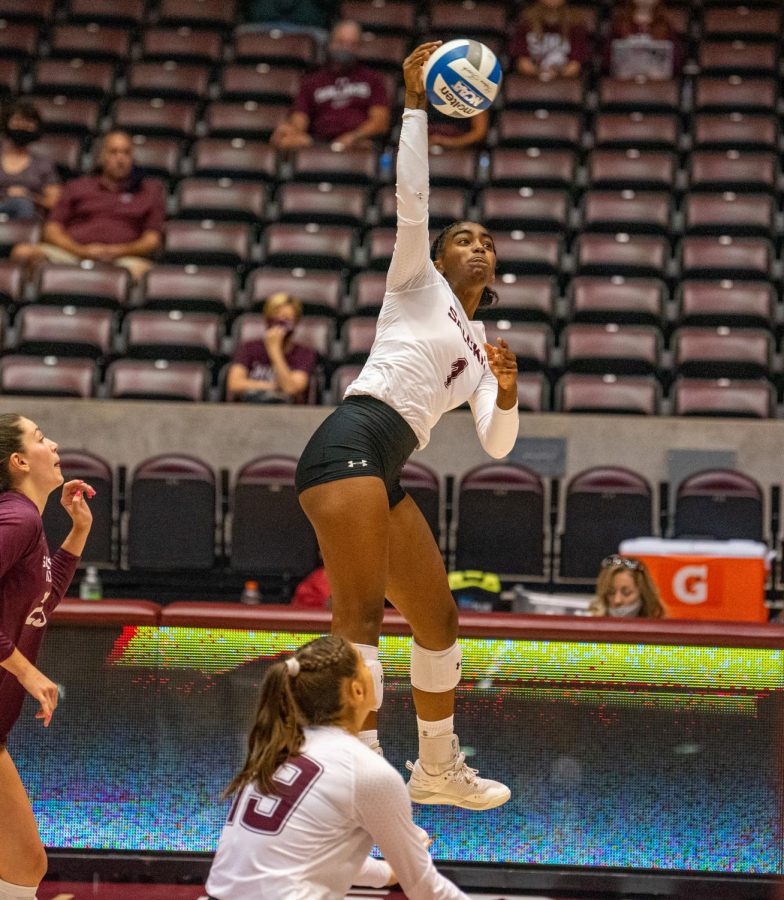 Nsia Gittens goes up for the spike vs. EIU. SIU would later on drop their early 2-0 lead and fall to EIU 3-2 on Friday, Sept. 10, 2021 during the Saluki Invitational at the Banterra Center at SIU.

Saluki Volleyball (5-9, 0-1 MVC) dropped their Missouri Valley Conference opener against Valparaiso University (9-2, 1-0 MVC)  3-1 Friday nightHighlighting the action for the Salukis Friday night were sophomore and Junior outside hitters Tatum Tornatta and Nataly Garcia. Tornatta and Garcia shared the lead for kills with 12 on the night for both. Freshman setter Anna Jaworski also made her presence seen on the night in both assists and digs. Jaworski totaled 34 assists and 16 digs against the Beacons.

Also worth noting, sophomore middle hitter Margherita Giani led the Salukis in blocks with five and shared the lead in aces with sophomore defensive specialist MacKenzie Houser with one each.

In the opening set, Valparaiso started off hot taking the first six points of the set, and never lost their lead throughout. The Salukis got within two late, making it 17-15 at one point, but Valparaiso earned eight of the final eleven points to take the 25-18 win.

Southern did exactly what the Beacons did to them in the second set, taking the lead early and didn’t look back. Valparaiso got the score within two, at 18-16, but SIU earned six of the next seven points, putting themselves at 24-17, all but earning the set win.

The fourth set wasn’t nearly as close as the third set, with Valparaiso going on a 7-1 run at one point and a 5-1 run at the end of the match to make take set four from the Salukis 25-17 and ultimately the match.

The Salukis will look to bounce back Saturday afternoon against the Loyola University Chicago Ramblers with a 5 p.m first tip in Davies Gym.