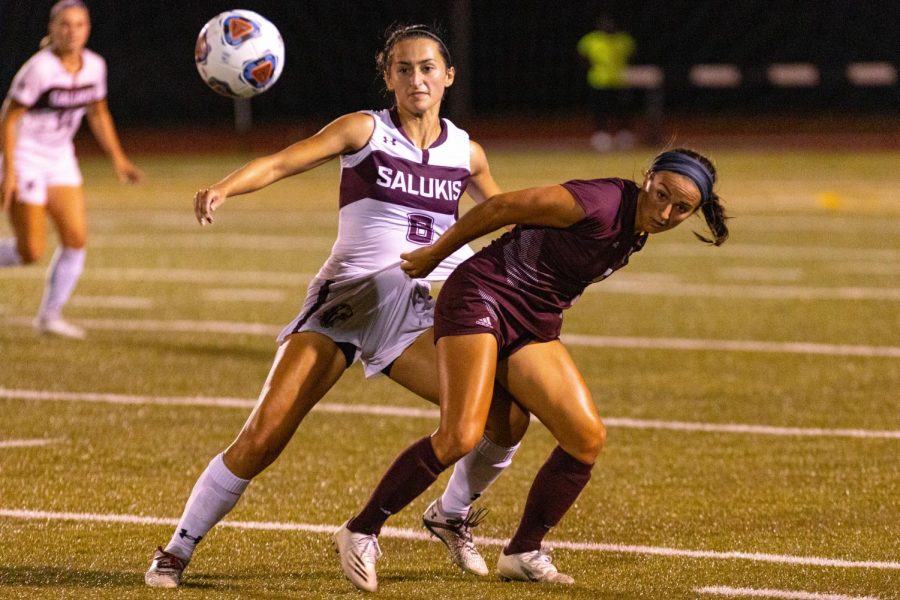 SIU forward, Liz Brechtel, watches as she passes the ball while being defended by a MSU player during SIU's first conference game against Missouri State. The bears would go onto to beat out the Salukis 3-0 on Friday, Sept. 17, 2021 at Lew Hartzog Track and Field Complex at SIU.

The game was the team’s first since head coach Grant Williams was placed on administrative leave. It was also the first Missouri Valley Conference game on SIU’s schedule.

Both teams were near even in shots, with SIU leading 14-13, but only three Saluki shots were on goal to Missouri State’s eight. Sophomore forward Sam Dodd provided all three shots on goal and four shots total.

Missouri State jumped out to a quick lead, converting a 12th minute corner kick off the leg of freshman forward Grace O’Keefe met the head of senior defender Isabel Burke for the first goal of the game.

83 seconds later, Bears freshman midfielder Kaeli Benedict pushed the lead to 2-0. O’Keefe added a goal of her own in the 23rd minute, stretching the Bears advantage to three.

The first half was highlighted not only by Missouri State’s offensive success, but also Southern Illinois’s struggles. The Salukis only recorded five first half shots, and none between the 9th and 36th minute.

Although they squandered three corner kick opportunities to end the first period, the Salukis came out of halftime relatively hot, racking up four shots in the first eight minutes. Dodd recorded each of SIU’s three shots on goal in the second half, but it wasn’t enough to shake Missouri State, who maintained its 3-0 lead until the final.

The Salukis will finish their non-conference schedule on the road against Murray State (4-3) on Sunday, kicking off at 1:00 p.m.