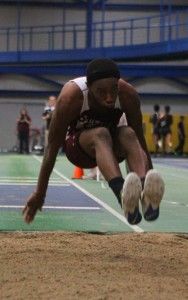 Palacious, a junior jumper on the Saluki track and field team, has already won a Missouri Valley Conference championship in triple jump as well as All-MVC in the long jump, and he is the reigning co-MVC Player of the Week for his first-place finish in the triple jump in Saturday’s Saluki Open.

“When I was in high school, and coach (Scott) recruited me, he told me he wanted me to come here and be a leader,” Palacious said.

It would be easy for Palacious to just lead by example with so many accomplishments in just two full Saluki seasons, but Palacious said his leadership is mainly vocal.

“When I first came here, we didn’t have a vocal leader on the guys side, so when someone had a bad meet I would always tell them, ‘This is just one meet, you have to forget about it quick, whether good or bad, because you have a next meet to get ready for,'” he said.

“He uses different words, so we always joke around with his accent,” Woods said. “We’ll talk about each other and I don’t even know what he is saying, but I just laugh.”

Despite the jokes, Woods said Palacious motivated him to attend SIU because he knew he was the best. Woods said he wanted to be the best, so he worked tirelessly to out- perform Palacious and match his work ethic.

“The way he practices help me practice,” he said. “I have a lot of flaws and he is technically sound, so if Coach tells me to lift my knee up and I can’t see myself, I look at Dougie.”

Andre Scott, SIU’s jumping coach, said he quickly knew Palacious possessed leadership qualities, and it took no time for him to assume the role.

Scott said he told Palacious as a freshman he had something the upperclassmen didn’t have despite being new.

“I told him there were a lot of older guys in front of (him) but (he was) actually a better leader than they (were), so when they leave (he would) take over the role as leader,” he said. “He actually did that before those guys even left.” .

However, Palacious’ leadership role doesn’t stop with his jumping teammates. The whole track and field team respects and looks up to him.

“If you pay attention to the kids and the interaction of our team, you can see he has a lot of respect for all the areas of our team,” Scott said. “It’s the sprinters, the throwers (and) the distance people. They all respect him very well.”

Scott said Palacious has already won one conference championship and with this season just beginning, and all of next season, he has a chance to win four more.

Scott said Palacious’ potential is limitless with national championship aspirations and an All-American award to bring home. However, Palacious said he has set his own goals.