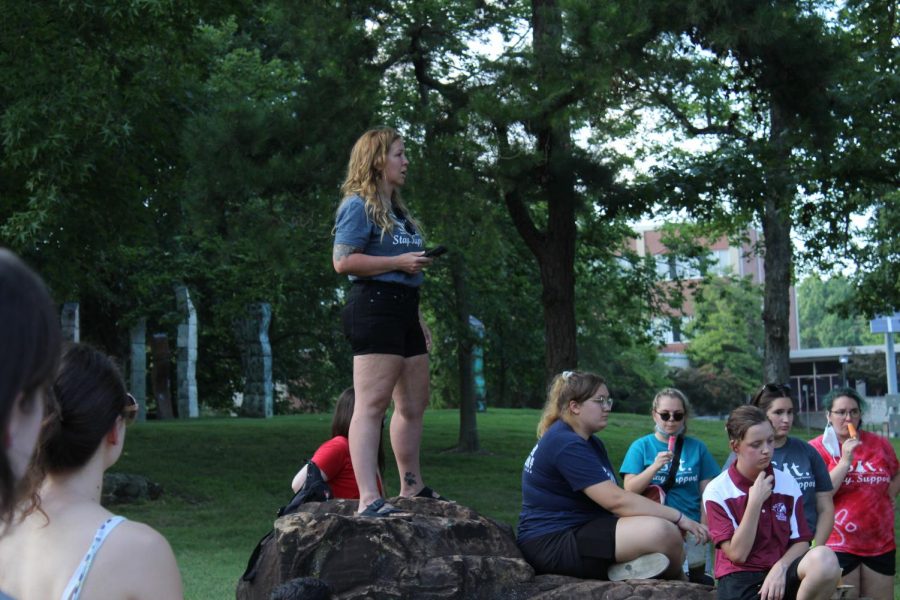 Lex Dietz, the program director for SIT Service Dogs, speaks to potential new members of the Saluki Service Dogs during the RSO fair Aug. 25, 2021 in Carbondale, Ill. The program works with SIU students to train service dogs for the community. "I always like new students it's just something different every semester. Somebody brings something new every semester, which is really cool," Dietz said.

The Supporting Independence through Teamwork (SIT) Service Dog program recently celebrated twelve years of providing the community with mobility assistance and medical alert service dogs. The program has partnered with SIU for the past seven years to give students an opportunity to work with the dogs on campus.

Lex Dietz, the program director at SIT Service Dogs, was approached by SIU students seven years ago, with the hope of creating a registered student organization (RSO) where they could interact and work with the animals. Since then, according to Dietz, the program has grown substantially into one of the largest student service dog programs in the United States.

Dietz said the RSO accomplishes a wide range of training with both the students and the dogs. The students begin shadowing trainers and attending lectures about basics of the program, such as the American Disabilities Act and how to teach a puppy to sit.

“Most other universities that have [service dog programs] have one or two dogs that are on campus and there’s maybe four students that work with them.” Dietz said.  “Last semester I had 38 students, 32 of which were junior and senior trainers, and we have 27 dogs in training.”

“We get to see students become these amazing, self confident people who have changed someone’s life in a very tangible way,” Dietz said.

According to Dietz, the dogs must go through 1,250 hours of training and exercises to be able to provide multiple services including neurological and medical alert assistance.

“We have to know that they’re not only going to do their specific skill set, whether it’s a diabetic alert dog or a seizure response dog, but we have to know they’re going to be able to do that in what we call reactive environments,” Dietz said.

Dietz said students replicate the kind of situations where a dog may need to alert their owners while under stress or in public spaces.

“There’s [a video] on our Facebook page of Natalie, who is a senior trainer with us, and she is having what looks like a meltdown,” Dietz said.  “She’s shoving the dog away, she’s crying. She has self harming kind of behaviors, all part of what we would see in autism spectrum disorder.”

She said placing the dog in situations similar to those they may be put in after training is all part of assuring the dog’s capability of providing alert services.

According to Dietz, part of the success of the program is thanks to the help and support the community has given over the years. Local businesses are supportive of service dog training in their buildings and make regular donations to the program during fundraising events.

“This is the absolute best place on earth for a service dog program,” Dietz said.  “The local community and businesses are fantastic to us. This community is so supportive of this that I hope we give back.”

Anna Wingert, a junior at SIU and the secretary for the Saluki Service Dogs, said that the program has given her a new perspective on the average tasks she does in her daily life.

Wingert has been working with the program since she was a freshman and said she believes people experience disability because most of the world is designed by able bodied people.

“A person who is in a wheelchair can be perfectly self-sufficient,” Wingert said “It’s just that the world isn’t built for someone who’s sitting down all the time.”

In her experience working with the dogs, Wingert said many people are often distracted by the service dogs in public when they should focus on the person.

Megan Thomason, the co-president of Saluki Service Dogs, agreed with Wingert. “As an able bodied person it’s really cute and it’s fun to see a dog doing its job and out in public, but they really are a medical tool,” Thomason said.

Thomason said the trainers ask community members not to touch or play with the dogs because it could distract them from doing their job and could cause them to miss an emergency for their owners.

“Those dogs really do serve a purpose and we’re not trying to be rude if we asked you not to touch them,” Thomason said.

According to Thomason, though the program has its challenges, it is also incredibly rewarding.

Thomason said the dogs help a person become independent where they might otherwise be dependent on others to do things that seem easy to able bodied people.

“These dogs are trained to do tasks that help some of these people to go to school for the first time or get to live on their own for the first time […] knowing that you get to have that impact on someone is a really cool responsibility,” Thomason said.

Thomason said she has had the opportunity to attend several service dog graduations where the dogs complete the program and are finally given to their owners. She has even had the chance to train a dog from puppyhood to graduation.

According to Thomason, she started working with a puppy her freshman year of SIU and got to see her graduate the summer before her junior year.

“To see her go from a young puppy who didn’t really know how to walk on a leash and could barely lay down through class to a full blown service dog that did what I asked her to before I even said anything was incredible,” said Thomason.

The Saluki Service Dogs said they welcome new members from any major or background and encourage people to check them out.

Sophie Whitten can be reached at [email protected] or on Instagram @swhittenphotography.