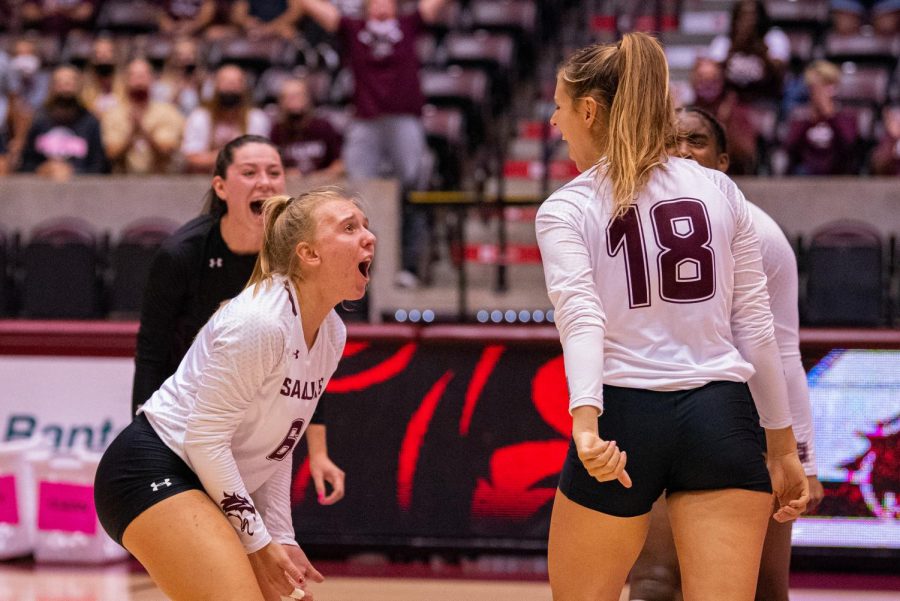 Freshman setter Anna Jaworski, left, reacts after a scoring play by Tatum Tornatta, right, during SIU's 3-2 comeback win against UT Martin during the Saluki Bash tournament on Friday, Sept. 3, 2021 at the Banterra Center at SIU.

Saluki Volleyball managed two wins in the tournament prior to the championship, beating Alabama A&M 3-0 and University of Tennessee-Martin 3-2 on Sept. 3.

The Salukis got off to a hot start in the tournament against Alabama A&M, sweeping the Bulldogs in quick fashion. The Salukis never let the Bulldogs get more than 15 points in any of the sets and only lost the lead for the first point of the third set throughout the match.

The second match on Friday against UT Martin wasn’t as smooth, but ended with the result the Salukis were looking for. SIU quickly found themselves down 2-1 and facing a loss late in the fourth set, but a comeback was brewing and the Salukis won set 4 with some extra time on a score of 28-30. They later won set five to secure a spot in the championship match Saturday afternoon.

Although the tournament didn’t end how the Salukis wanted it to, SIU matched and eclipsed their win total from last season just in the past two days, a sign of brighter days to come for Saluki Volleyball.

Saluki Volleyball returns to Davies Gym Tuesday afternoon in a match versus Saint Louis University with a start time of 6 p.m.