SIU’s Hall of Fame class of 2021 revealed; Macklin, Viggars, among others included 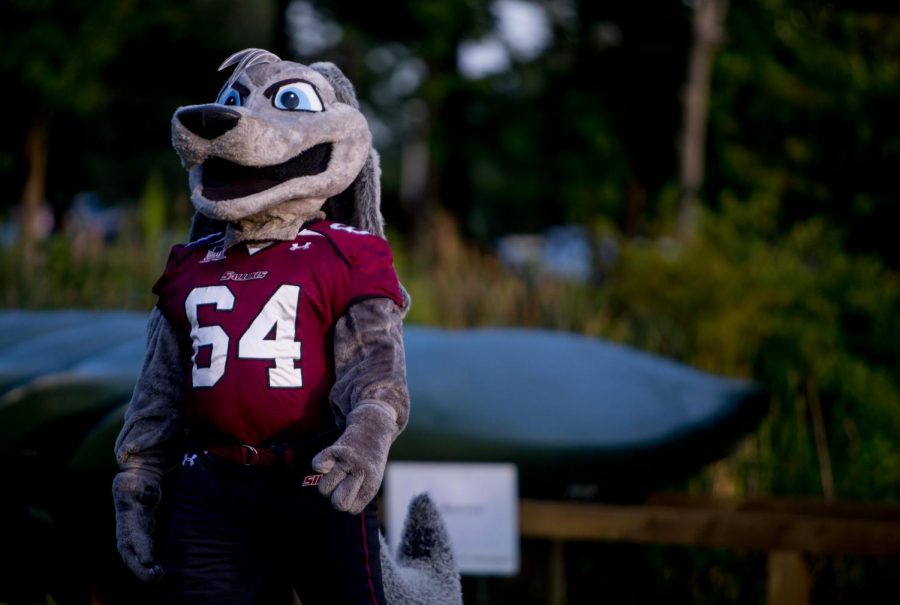 Grey Dawg walks among canoes on Thursday, Aug. 16, 2018, during "Light Up the Lake" at Campus Lake. (Brian Munoz | @BrianMMunoz)

These inductees have accomplished impressive athletic feats before and after graduation. For example, Price, a two-time NCAA champion at SIU, finished eighth in the hammer throwing competition at the Olympics in 2016 and 2020. Pruitt is now a player in the NFL on the San Francisco 49ers, and Smith is now the throws coach at Ole Miss.

Macklin said receiving this honor was an inspiring experience.

“My heart started beating really fast. It was an unbelievable and surreal experience. I could only thank god first. It had to be his plan with this whole experience and where I came from,” Macklin said.

Macklin said that SIU stands for many different core values: Work ethic, hard work, and discipline. He aims to represent as a new hall-of-famer.

“Our coaches had these smaller rules with staying neat and presentable outside of basketball with how you take care of yourself.” Macklin said.

“When she’s awake, I’m asleep and vice versa, but we always like each other’s pictures on Instagram and Facebook and we chat when we can,” Viggars said.

Viggars was on the 2015 team, the first ever to reach the NCAA tournament. It’s something that has stood out to her ever since.

Macklin said the sense of community at SIU stood out to her and that community is reflected in the hall of fame class.

“I was taken to Harbaugh’s Cafe the first day I got here. Immediately a lot of the elderly people that were there started to latch on and wanted to know about me, what sport I played, and what I was studying,” Macklin said. “It started before I was even a student athlete at SIU and it continued.”

Teammates and friends of Macklin still keep in touch with her today. Macklin even has a good friend being inducted in the same Hall of Fame class with her.

“I could always pick up the phone and call her and check on Meg to see how she’s doing for herself. The relationships I built at SIU continue outside of it,” Macklin said. “I couldn’t be more happy with where the girls are at and how much they mean to me and what they do for me and my life today.”

Macklin gave birth to a son during her time at SIU. Despite her love of SIU and how successful she was, Macklin said she doesn’t want to influence her son when it comes time for him to decide what school to continue his education.

“Again, SIU was an unbelievable experience and I still have relationships that are really lifetime relationships, but I wouldn’t tell him to go to SIU because I would want him to be inspired by his own thing,” Macklin said. “I’d like for him to have his own dreams and inspirations when it comes to his college choices.”

Macklin said one of her favorite memories at SIU was the night she broke the all-time scoring record.

“Having my son run onto the floor to me would be the most memorable because it signified a lot of the experience that I went through before,” Macklin said. “It was more than just breaking a record for me, it was what I was doing to inspire others outside of myself. That was really huge.”

Former Volleyball player, Meg Viggars, a native of Stoke-on-Trent England, manages to still stay in contact with Macklin despite the obvious time differences.

“When she’s awake, I’m asleep and vice versa, but we always like each other’s pictures on Instagram and Facebook and we chat when we can,” Viggars said.

Viggars was on the 2015 team, the first ever to reach the NCAA tournament.

Viggars said there were a variety of different things she learned at SIU that she still remembers today.

“Turning up everyday and being ready to push myself. Just being a good person in general and being responsible for yourself,” Viggars said. “I came to SIU and wasn’t really that good in the academics side and suddenly something clicked in me and in my last few years I started to get 4.0s.”

Viggars said she had a role model to look up to at SIU.

“My coach, Justin Ingram, from the moment I arrived he believed in me and pushed me to be the best I can be,” said Viggars.

With being originally from England, Viggars’ family still found time to come and visit Carbondale to see their daughter play.

“Even my family loved my time there. They managed to come there once or twice a year, Viggars said.

Viggars has some words of advice to some of the current freshmen this year.

“Enjoy every minute. Time flies really quickly. 4 years really ended in a flash so enjoy every minute. Do everything you want to do because you don’t want to think about the regrets after you finish,” Viggars said.

Each member will have a plaque hung up at the Banterra Center with their name to commemorate their athletics career at SIU. A ceremony will be in place to formally induct each member on Friday, October 15, with appearances to be made the next day during the annual homecoming celebrations on October 16.