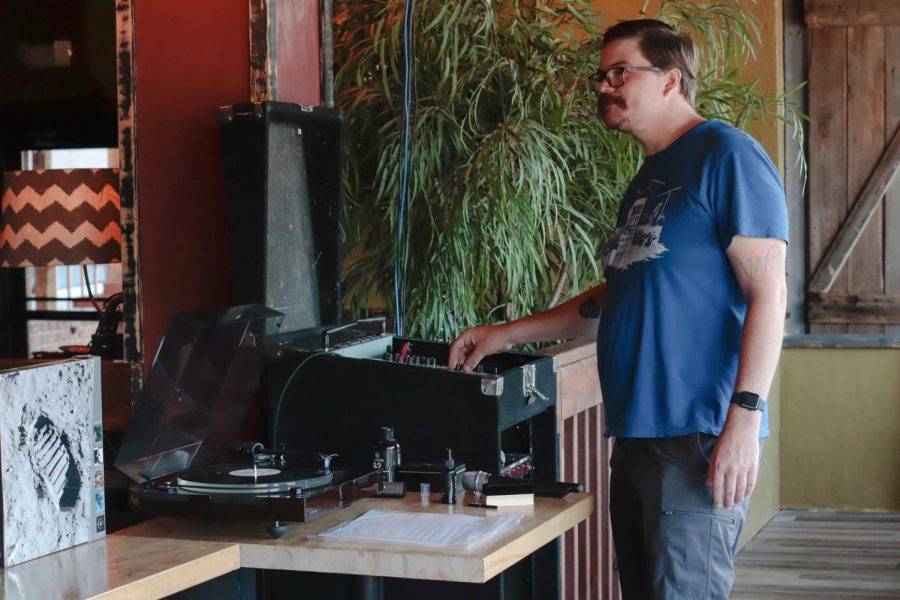 Josh Combs plays a vinyl record over the house speakers Aug. 11, 2021 at the Record Swaps and Needle Drops event at Buckwater Brew Works and Whiskey House in Carbondale, Ill. Combs organized the event and said, “It’s something that kind of came out of just listening to records with friends and thinking that enough people enjoy listening to records that they might come out and like to do it in public.”

Josh Combs, a Carbondale local and manager at Buckwater Brew Works and Whiskey House, decided to turn his passion for vinyl records and music into an opportunity for other music lovers to meet and share their collections.

Combs started a Facebook group called Southern Illinois Vinyl Enthusiasts where he began to grow a following of vinyl collectors. The group was created for collectors to share their own records as well as buy, sell, and trade vinyl. It also gave people a platform to begin to dive into the world of records without having to know a lot about the niche.

Combs got the idea from the Facebook group to host an event where vinyl enthusiasts could come and show off their collections. He coined it Record Swaps and Needle Drops.

Combs said the event served a dual purpose to both share his passion for vinyl records and also to try something new at Buckwater. “I book other kinds of things and we were just trying to think outside of the box about other things that we can do,” Combs said.

“I started listening to vinyl and collecting about eight to ten years ago and the best way you can start is just to start modestly,” Combs said. “It’s relatively affordable to get a turntable and start a collection. I would actually recommend to start a collection the same way I did […] just buy records without having a turntable, that way when you have one, you have a lot of records to listen to.”

He said he enjoys the technical aspect of listening to a vinyl record and how the sound is made as it plays through the speakers. He said, though there is a level of inconvenience to listening to vinyl, the sound quality is preferable.

According to Combs, though vinyl records were an object of the past for many years, they have become popular in recent years.

Combs said he has been able to meet other vinyl users through the new found popularity of the records and he hopes that the event can become a monthly occurrence where people can continue to meet one another and grow their collections.