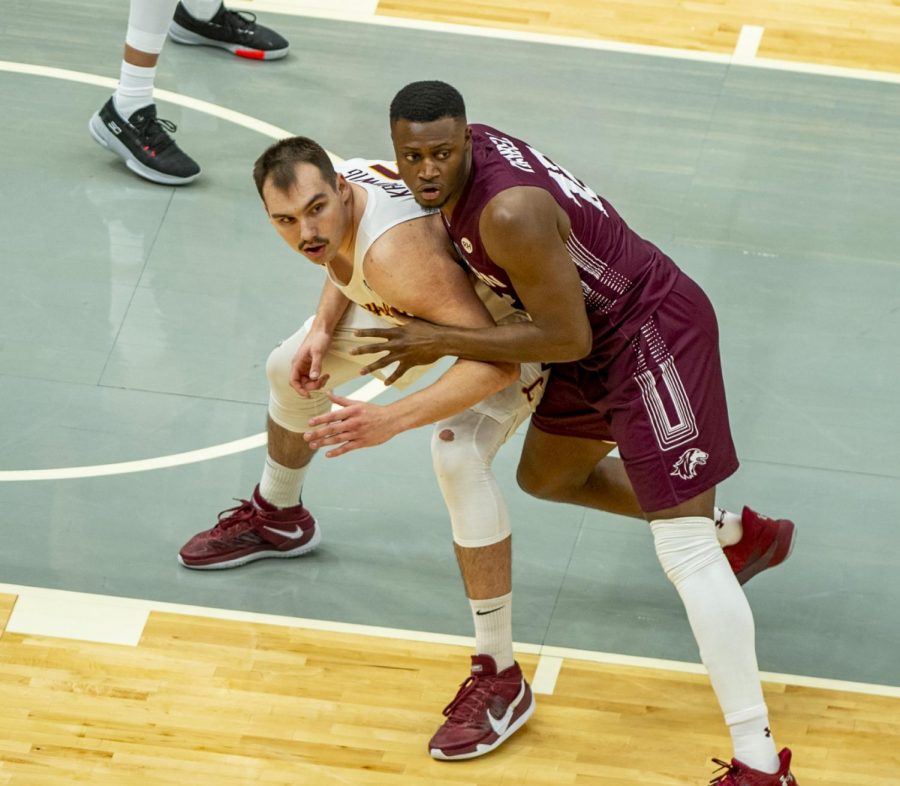 SIU forward Sekou Dembele heavily guards Cameron Krutwig of Loyola during the Salukis' 49-73 loss against Loyola in the Arch Madness tournament on Friday, March 5, 2021 at the Enterprise Center in St. Louis, MO.

The SIU Men’s Basketball team was honored with the Team Academic Excellence award, given by the National Association of Basketball Coaches (NABC)

SIU Men’s basketball forwards Sekou Dembele and Will Keller both earned titles on the NABC honors court. The title is given to juniors and seniors who maintain a 3.2 Average GPA throughout the year and stay with their current program at least one year.

“I don’t even have the words to describe it, ” Dembele said. “Now that I got this honor, it really shows all the hard work.”

“I think it shows that I work hard on both ends of things,” said Keller. “It shows how hard not just myself but how hard we all work outside of the practice facility.”

Dembele, originally from Bamako, Mali, said he believes he has come a long way from where he was when he entered his collegiate career at SIU.

Keller said balancing homework along with time on the court is “tricky.”

“Academics are just as important, if not more important than play,” he said. “We spend a lot of time playing basketball, but one doesn’t take precedence over the other.”

Since Coach Bryan came, the whole team has done an excellent job getting the guys focused on school,” he said. “If you see where Coach Bryan came from with a 4.0 GPA, that tells you a lot about him.”

Dembele said the basketball team tries to look up to coach Bryan as a role model.

“He did it and they made it to the tournament. So we have no excuses,” Dembele said.

The coaching staff enforces  a mentality that puts academics ahead of the athlete’s time on the court.

“Everyday after practice, coach mentions the same thing –  to not get behind in school work” Dembele said. “Coach Jevon gets on us all the time to get our stuff done. He’ll call us 10 times the day before to get our homework done.”

Dembele also credits the staff members in the academic department.

“[They] are doing a great job getting us whatever we need with tutoring,” he said. “They really put everything in position so that we can have a rich result”.

Keller said the coaches put an emphasis on the importance of balancing academics and athletics.

“Our entire team was very disciplined when it comes to academics, but coaches were very adamant about making sure we get our schoolwork done,” Keller said.

“There will be plenty of times after practice or film that coach will take time to make sure to tell us to get our schoolwork done and to stay ahead of our classes.”

SIU has study tables where players are given time to review their course work throughout the semester.

Student athletes must have a particular mindset to succeed in both aspects of their college life.

“It’s definitely a mindset.,” Dembele said.“I know what I need to get done. Whatever you put your mind to you can get done”.

“Basketball got me to where I am now, but you can’t put school behind, […] even if you don’t feel like doing it you gotta do it,” said Dembele.