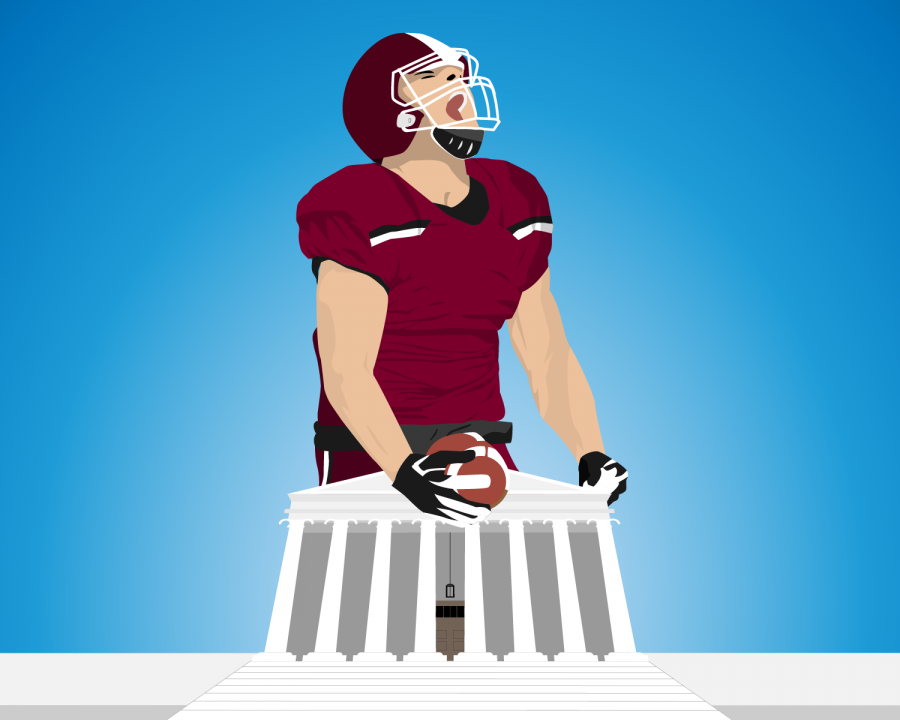 June 21, 2021. A date that will be remembered by college athletes everywhere. On this date, the Supreme Court ruled college athletes can be compensated for their name, image and likeness. The ruling means the NCAA cannot restrict payments to athletes for any advertisements or labor they might be involved with during their time as an athlete.

The ruling comes at a time of division amongst many upon the ruling, with many in support of the new rules, and others discouraged with the new changes.

The new ruling opens the door  for sponsorships, partnering, promotions and compensation on social media and other advertisements for athletes everywhere.

Jarnigan said there are potential drawbacks to the NIL rule change.

“The drawbacks that people are concerned about are if there are schools out there that will try to take advantage of this on the recruiting trail,” she said.

Jarnigan said there are guidelines put in place by the NCAA already to prevent schools from using potential scholarships as a recruiting enticement.

“The concern is that the gap between the haves and have-nots financially in college athletics will grow. We don’t think we’ll see a lot of that here. We’re focusing on all the positives that this can mean for our student athletes,” Jarnigan said.

Jarnigan said the athletic department has been putting in efforts to impliment the new changes.

“We have a policy in draft form and are working in our general council to implement that. We try to monitor all NIL activity as well,” she said. “There is also a current push for federal legislation in this area to bring about some uniformity in the policy and application and so where we are at today with this is likely to look different as we move forward over time.”

Senior SIU football safety, Qua Brown, said he has concerns regarding the new ruling on the recruiting trail.

“Guys will try to get to the biggest schools for financial reasons alone. So the amount of money you’d get at certain schools will certainly become a deciding factor in the years to come,” Brown said.

Brown, entering the final six months of his college career at SIU, said that the unfairness of the old NIL rules is what caused this change in the rules.

“It was basically saying that the guys at the bigger schools can make this money, but the guys at the smaller schools can’t,” Brown said. “They’ll at least have the same opportunity now. They know that there’s a huge difference with that so I think that was a big deciding factor on that”.

“With barstool there isn’t any money involved right now, but if I ever were to profit later it would honestly go towards my living situation. It really wouldn’t be something I would want to blow off. So school supplies and my rent would basically be it,” Brechtel said.

Brechtel applied as a partner with popular sports media company, Barstool Athletics. Brechtel applied within 24 hours after the July 1 date passed that officially eliminated the restrictions upon athlete’s name, image, and likeness. Within three days, Brechtel was named an official Barstool athlete.

“I pretty much signed up by filling out a form and sending it in,” Brechtel said. “All I had to do was put “Barstool Athlete” in my bio, send a picture in, and they posted it. Right now it’s pretty much just getting merchandise and other stuff like that. It’s a fun thing they’re putting together.”

The change comes with a lot of uncertainty for athletes, coaches, and the business as a whole. With so many changes going on, some athletes have their own suggestions for additions to this rule they would like to see.

Bretchel said athletes should have more guidance throughout the process.

“I think an agent would be able to help out a lot of athletes. There are a lot of people wanting to take advantage of this opportunity, but we really don’t know what we’d be getting into. So I think having somebody like that would help a lot and keep kids out of trouble,” Brechtel said.

To athletes like Brechtel, most of these changes are just another distraction to their main focus: playing.

“A lot of kids do need it and it will definitely help in the long run, but the money doesn’t really matter to a lot of us. We love our sport and it’s nice to be compensated for it, but we’re here to play first and we love what we do,” Brechtel said.