The Daily Egyptian • May 3, 2016 • https://dailyegyptian.com/1082/uncategorized/captain-america-civil-war-deserves-superhero-worship/ 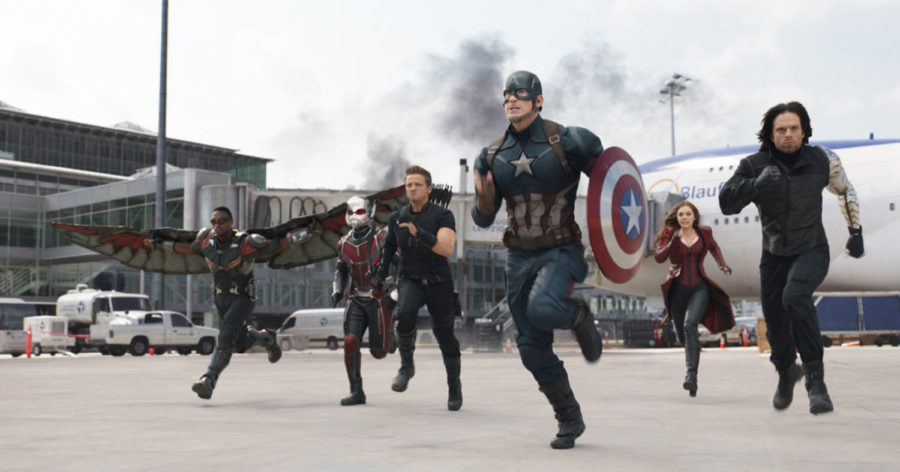 By Cary Darling, Fort Worth Star-Telegram

Moviegoers can be forgiven if they’re a little skittish about returning to theaters for another superhero-vs.-superhero showdown. After the cinematic car crash of “Batman v Superman,” the idea of a gang of costumed crusaders going WWII on each other doesn’t necessarily inspire enthusiasm.

But “Captain America: Civil War,” like its two predecessors, overturns expectations and ranks as one of the better vehicles to roll off the Marvel assembly line.

While it lacks the sense of surprise of the second film, “Captain America: The Winter Soldier,” its mix of action, humor, effects, the introduction of a new character and the reintroduction of an old one strikes just the right tone for a film that is as much about marketing as moviemaking.

The similarity to BvS doesn’t end with the concept of good guys squaring off against each other. In both cases, our heroes are dealing with the perhaps unintended consequences that their presence has among mere mortals. At what shade of gray does doing good curdle into doing bad? Do the heroic ends justify the murderous means?

“Civil War” doesn’t dig too deeply into this quandary – after all, this is the snarkier Marvel movie universe, not the gloomy world of, say, DC Comics-based “The Dark Knight” – but directors Anthony and Joe Russo unearth just enough emotional baggage for our heroes to carry.

When “Civil War” opens, stalwart Steve Rogers, aka Captain America (Chris Evans), and some of the Avengers crew are doing their kill-’em-all routine against some evildoers in Lagos, Nigeria. As usual, innocents are killed and the world – through Secretary of State Thaddeus Ross (William Hurt) – tells them that it’s had enough of being the collateral damage strewn in the wake of their superhero muscle-flexing.

The Avengers are given a choice: retire or sign an accord putting themselves under the control of the U.N. Tony Stark, better known as Iron Man (Robert Downey Jr.), is down with it. A visit by a mom (Alfre Woodard) whose son was killed during one of Iron Man’s missions has convinced him of his culpability.

At the other end of the spectrum, Captain America thinks the restrictions are nothing but a bureaucratic yoke. He refuses to sign, and the rest have to choose sides.

Team Captain America has Falcon (Anthony Mackie), Hawkeye (Jeremy Renner), Ant-Man (Paul Rudd) and Scarlet Witch (Elizabeth Olsen). It turns out the good guys are far more entertaining as adversaries than any of the bad guys have been.

But that’s not the whole of it. T’Challa (Chadwick Boseman), the son of an African king, wants revenge against Bucky Barnes/Winter Soldier (Sebastian Stan) because he blames him for his father’s death. That’s where T’Challa’s alter ego, Black Panther, comes into play.

Yet Captain America has allied himself with Bucky, who was programmed decades ago by the Soviets to rampage and kill, but now doesn’t want any part of that. Meanwhile, a mysterious figure named Zemo (Daniel Brühl) is up to no good, and has an elaborate, Pinky and the Brain-style plot for revenge – the kind that only sounds credible within the world of superhero movies.

The Russos, who came out of TV (Community, Happy Endings) before landing “Captain America: The Winter Soldier”, keep things moving briskly and stage a couple of neck-snapping action scenes. The airport battle alone is worthy of a few high-fives.

Still, writers Christopher Markus and Stephen McFeely mine the script with enough offhand comedy to maintain the attention of the action-weary. One of the highlights is the new Spider-Man, who comes across as much younger than the previous movie incarnations but also exceedingly likable.

As is generally the case with Marvel movies, stay through all the credits for a couple of extra scenes. And then sit back and wait patiently for the next models with any of these characters – upcoming are Spider-Man: Homecoming, Black Panther, Ant-Man and the Wasp and “Avengers: Infinity War – Part 1.” Because Marvel cranks them out faster than Toyota makes Camrys.

Visit the Fort Worth Star-Telegram at www.star-telegram.com