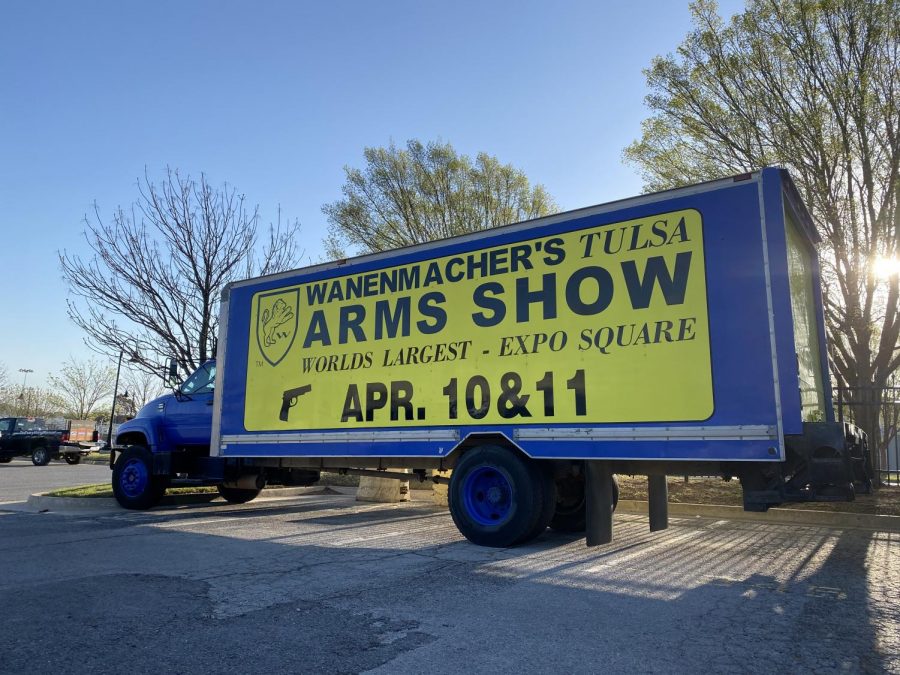 A truck advertises the "world's largest" gun show at the entrance of the Tulsa fairgrounds at the Wanenmacher’s Tulsa Arms Show on April 10 and 11, 2021, in Tulsa, Okla.

On April 10 and 11, Tulsa, Okla. hosted the world’s largest gun show and with over 4,000 tables, the Wanemacher’s Tulsa Arms Show accommodated around 40,000 people from across the world.

The show was started over sixty years ago by the Indian Territory Gun Collectors Association as a way to display and trade their collections of modern and antique weapons. Around fifty years ago, the current president of the show, Joe Wanemacher, was elected as the overseer of the gun show and has run it ever since.

“He missed one of the meetings and the meeting that he missed, they opted to make him in charge of having to put the show on. And this was humorous because nobody wanted to do it because it was a difficult, unthankful task, but he came back and he did it […]  He was actually a petroleum engineer and gun collecting is just a love of his, and so, anyway, his love turned into his job,” Wanemacher’s daughter-in-law, Bunny Wanemacher, said.

At the show, there is a wide variety of arms and collectables from antique and modern guns, knives, war memorabilia, and accessories and people come from all over the world to see, buy, sell and trade arms.

The event is two days long and there are two levels in the show packed with tables to stop by. The majority of sellers are located in the tables or booths, however, there are also private sellers that can be spotted walking through the show with their weapons for sale. They had their information pinned or taped to their shirts with the type of weapon and price, advertising their sale.

There were  handmade items such as knives, guns and cannons that demonstrate craftsmanship or build-your-own items that come at a percentage of average costs. Scattered among the weapons for sale, were also booths of t-shirts with political cartoons or messages on them, jewelry stands with hand crafted accessories, and tables of artwork from across the country. There are also tables with antique coins or animal furs and skins.

“It is a family run business and we do pride ourselves on education and family and doing things right […] as people say, ‘If you can’t find it at Wanemacher’s you probably can’t find it,’” Bunny Wanemacher said.