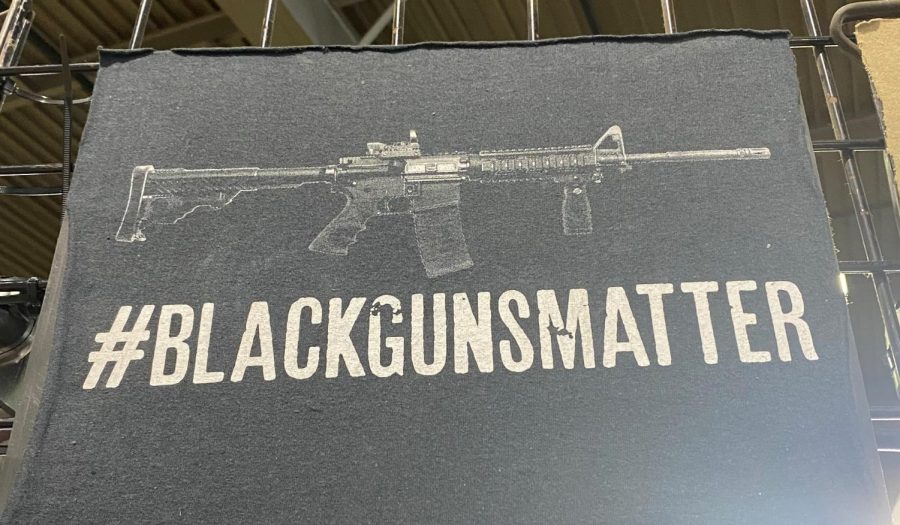 A #Blackgunsmatter banner hangs in one of the booths at the Wanenmacher’s Tulsa Arms Show on April 10 and 11, 2021, in Tulsa, Okla. “I would tell Black people who are considering getting a gun to do your research to talk to people you trust people who know something about guns. Go to the gun range. Find something that fits you to for it and don’t be afraid of it,” Marc Ford, a Black gun owner, said.

I have avoided and abhorred guns for the majority of my life but on the weekend of April 10th to 11th I stepped into the heart of American gun culture at the Wanenmacher’s Gun Show in Tulsa Oklahoma, which is regarded as the largest gun show in the world.

I spent the majority of my childhood in small town America. I went to predominantly white schools before high school where I learned quickly that it was easier to mold myself into a palatable Black person rather than stand 100% in my identity.

It took years of re-education to break down the false identity I had created for myself throughout my developing years.

Growing up in a  predominantly white environment for so long conditioned me to prioritize the comfortability of white people over my own. Whether it be never employing African American Vernacular English-AAVE or pidgin English in my conversation, or simply not wearing certain pieces of clothing to avoid the perception of being “too” Black or too “African”.

At the gun show I reverted to my  palatable persona that I abandoned years ago so as to not alert the white people who were clearly uncomfortable with my presence and my appearance. Worried my braids would be perceived as too ethnic, I removed the gold jewlery I had placed in my hair and placed my box braids in a low ponytail. Worried my clothes would be too “ethnic” I borrowed clothing from my Editor-in-Chief.

After years of police brutality against the Black community my view on guns shifted. Instead of seeing them as an enemy I began to see them as one of my only means of protection in a world where people view my skin tone as a threat.

In a community where misogynoir runs rampant I began to see gun ownership as a way to protect myself as a woman.

After speaking to some of my journalism professors about what to expect at this event they reassured me that there would be a substantial amount of people present that looked like me. For that reason I went to the gun show with an open mind and naively expected to be well received by the attendees.

On the morning of the gun show as we made our way towards the line we passed hundreds of cars from around the country- everywhere from Texas and California to Missouri and Illinois their bumpers adorned with “Back the Blue,” “MAGA,” and “Come and Take It” stickers as we rolled by. There was even a black bus with the Oath Keepers skull on the front of it.

As attendees exited their cars I was shocked to see them toting at least 4 guns on their shoulders and strapped to holsters on their hips.

As we exited the van and walked toward the line my heart beat quickly in my chest. The stares I received began almost immediately. Everyone I passed did a double take. They looked at me with a mixture of disbelief, suspicion.

One man in particular made it clear to me with his prolonged look of disgust that I was not welcome by him. It was a sensory overload for someone like me who had never been to a gun show let alone seen a gun in real life. I tried to hide the shock and disbelief on my face as thousands of guns sat on booths all over the event center.

Once we were inside my presence was made even clearer to me the gazes and stares continued. Looks of confusion followed. We took a walk around the grounds to warm up to the surroundings. Although walking around only made me more aware of my presence, especially the color of my skin.

We passed booth after booth covered in Nazi paraphernalia, confederate flags, back the blue propaganda and Trump merchandise.

Before coming to the show I made sure to leave all my preconceptions about gun owners behind. I did not expect the show to be nearly as politicized as it actually was. The conservative values of most of the gun owners was made abundantly clear by rows of “Pretty Tired of Stupid Democrats” t shirts and the “If you voted for Biden Fuck You” t-shirts.

We approached a table where I held my first gun. As I held a pink camouflage hunting gun I expressed excitement although on the inside I was incredibly uncomfortable.

I didn’t even know how to hold the gun properly and the fact that I was a novice was made abundantly clear by my body language holding the gun.

I explained to many vendors throughout the day that I wanted a gun for protection as a woman. I never mentioned the fact that I felt I needed protection as Black person as well.

I finally saw the first Black person of the day walking around with his friend. I had never been more excited to see someone else who looked like me. When I approached them to speak to them they agreed with my sentiments that there were few, less than 1% of any other race than white at this show.

The Black young man explained to me that guns and black people are usually thought of in the context of gang violence in this atmosphere. To mention you want a gun because you don’t feel safe because you are Black would not be met with any understanding because to the large majority of the people there I was already a threat.

To others I was not perceived as a threat as long as I prescribed to their conservative values and views on gun ownership.

This was confirmed when I saw remakes of the Black Lives Matter slogan transformed onto t-shirts and buttons. It was okay to validate that Black gun ownership mattered, but to say our lives were worth value was a step too far.

Though there was not a single piece of merchandise that embraced the original Black Lives Matter slogan there was a table selling pins that read“White Lives Matter”.

As I found a couple more Black people during my two days at the events they all expressed to me that there was a misconception that Black gun owners were all “thugs” they sympathized with my feeling that the people at the show were suspicious of me due to my appearance.

I had my own growing suspicions of them as well. As we continued our journey through the gun show I noticed not only did people proudly carry multiple guns on their person but that they also used their guns and bodies to advertise guns they wanted to sell.

Attendees stuck paper on their backs or flags down the muzzles of their guns advertising their weapons.

I am wondering how these guns would be purchased legally. Tables all around were plastered with “Cash Only” signs which made my suspicions grow even larger. There were antique gun collections, hunting guns, and defense guns, knives, pepper spray and other weapons of survival and otherwise. I did not see anyone asking for ids or background checks being processed.

I was even more suspicious of the intent of vendors who sold paraphernalia with a strong racist history. Entire booths were dedicated to Confederate and Nazi Flags. I felt uneasy, uncomfortable and like any wrong move I made would be noticed by the hundreds of gun toting attendees around me.

There was no amount of camo green, or plain clothing that would make me blend in this environment. I had not felt the emotional exhaustion it takes from the labor of denying your true identity since I graduated middle school. I was transported back to a younger version of myself and the weight of feeling like an imposter was heavy.

The gun show made my feelings about gun ownership more complex. I left with more questions about gun ownership than I came with. What if the very gun I hope to own to protect me will be used as a reason to justify my death? What if owning a gun as a black person puts a greater target on my back?