The Daily Egyptian • May 4, 2021 • https://dailyegyptian.com/107883/news/dietetics-interns-made-educational-videos-to-work-around-covid-restrictions/

Dietetics interns made educational videos to work around COVID restrictions 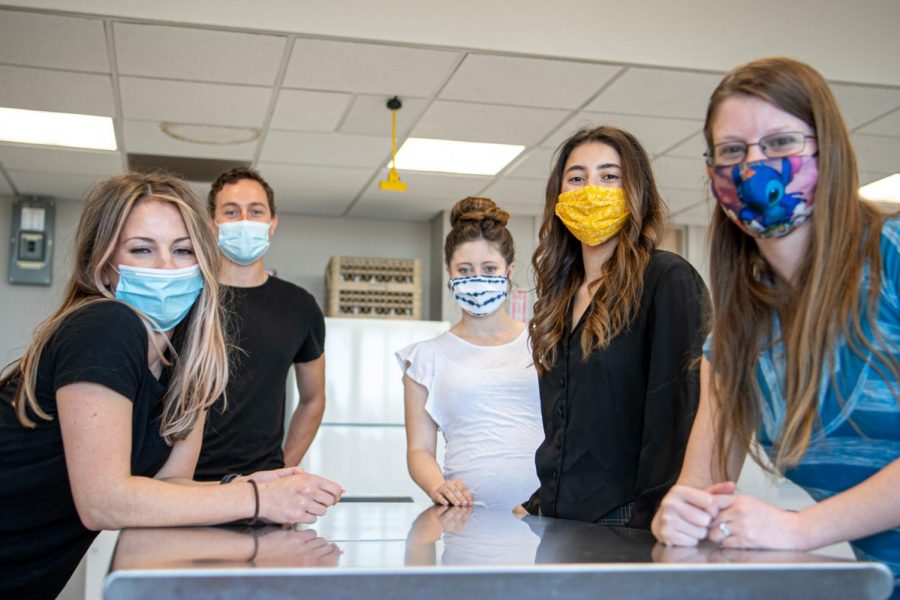 SIU Dietetic Interns Ashely Johnson, left, James Carmichael, Melanie Tharp, Arianna Bolivar, and Mariah Nelson stand for a portrait on Thursday, April 15, 2021 in Quigley Hall at SIU. The Dietetic interns along with the undergraduates in Student Nutrition Academic Council (SNAC) have been producing a video series called Tasty Videos. These videos are made for the Murphysboro Food Pantry, to help show people coming into the pantry by showing quick cooking tutorials on how to make their meals more nutritious with things from the pantry.

A group of grad students in SIU’s nutrition program waded into unfamiliar territory this year, making a series of educational videos for the Unity Point school district health fair and Murphysboro Food Pantry.

Normally, the students would set up a table with informational boards, activities and food samples, but that wasn’t an option after the COVID-19 pandemic pushed many normal school operations online.

“I don’t think I’m into the whole marketing and digital aspect of it all, but it was good to know because like I said, it’s going to be part of the new COVID lifestyle,” Mariah Nelson, a 26 year-old grad student at SIU, said.

The students used readily available softwares like iMovie, Moobly and Canva to put together five minute and or less videos on topics like calcium intake, hydration and vaping that could be woven into a larger scavenger hunt activity for the kids.

“There was a learning curve to doing all the video editing and stuff. So that took just a little bit more time to figure out all of that while providing that education” Arianna Bolivar, a 25 year-old grad student at SIU, said.

Like almost every other aspect of life during the pandemic, the Dietetic interns had to help pull together an entirely new system to complete their project.

“No one has ever done these videos that we did,” said Brenda Green, an associate lecturer and dietetic internship director. “We get asked to do things that we’re not familiar with sometimes, and you just kind of jump in and figure it out.”

Nelson is the oldest of eight siblings and took inspiration from childrens’ cartoons in crafting the videos.

“All of my siblings really like SpongeBob SquarePants, and they really liked that SpongeBob movie where it went back and forth between in-real-life people and cartoons,” Nelson said. “So I used the Animaker software to make a cartoon of myself talking to them as a pirate to tell them about calcium.”

The group also took inspiration from Tasty’s Tik Tok channel to make a series of 30 second recipe videos for the Murphysboro Food Pantry.

“They were wanting to display recipes for the members that came in with the foods that were offered,” Green said. “We provided a handout that had the recipe, but then also some nutrition information on it.”

The group plans for the tools they worked with to be used for future projects as well.

Staff reporter Jason Flynn can be reached at jflynn@dailyegyptian.com, by phone at 872-222-7821 or on Twitter at @dejasonflynn.