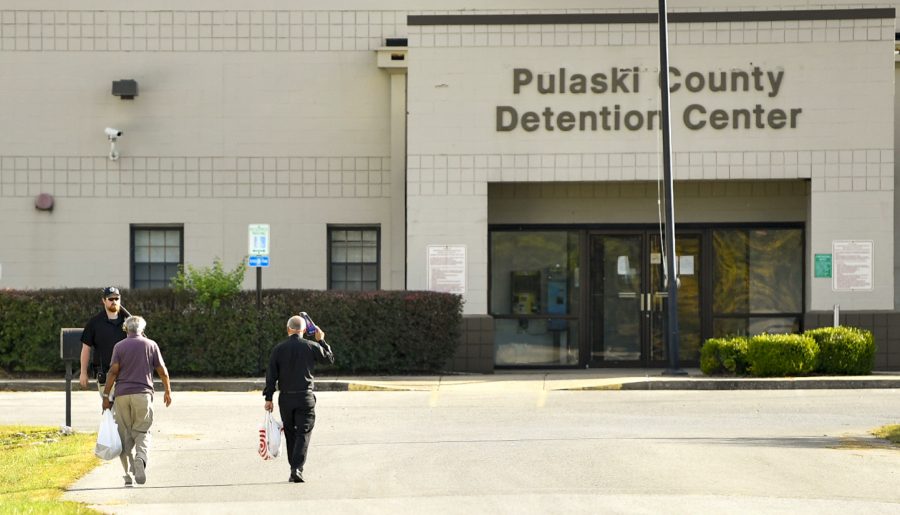 Two members of the Carbondale Interfaith Council make their way toward the Pulaski County Detention Center Sunday, Oct. 11, 2020, in Ullin, Ill. Carrying bags of supplies for detainees, they presented them to the guard, but were rejected and turned away. The facility is an ICE owned detention center. Since COVID-19 hit, the facility itself has had an outbreak resulting in 78 confirmed cases of the virus. The Carbondale Interfaith Council held a prayer vigil outside of the detention center to pray for the detainees, their families, and the workers within the center.

William Russell, a 61 year old Jamaican immigrant, has been detained by the U.S. Immigration and Customs Enforcement since July, 2020.

“About four months ago, I go to the doctor and I was telling him, my feet is hurting and it swells,” Russell said in a statement.

Accusation of medical neglect and unsafe living conditions have been levied against the Pulaski County Detention Center in Ullin, Ill.

A month after the incident Russell was taken to the emergency room at a nearby hospital, where a doctor informed him that his right leg would need to be amputated.

“The agency has instructed its field offices to further assess and consider for release certain individuals deemed to be at greater risk of exposure, consistent with CDC guidelines, reviewing cases of individuals 60 years old and older,” ICE said in its statement.

Of the 600 detainees ICE has deemed “vulnerable” 160 have been released from custody.

Russell’ deportation flight is set for April 29, but the Jamaican government has not yet given approval for his return due to Russell previously contracting COVID-19.

The Southern Illinois Immigrant Rights Project, a group advocating for expanded rights of immigrants, hasve attempted to help secure Russell’s release through calls and emails to the detention center.

Russell has joined two other detained immigrants in filing a civil rights complaint against the facility.

The National Immigrant Justice Center filed the complaint on behalf of the detainees.

Since the start of the pandemic the Pulaski County Detention Center has confirmed 113 cases of COVID-19, the highest of any ICE detainee facility in Illinois.