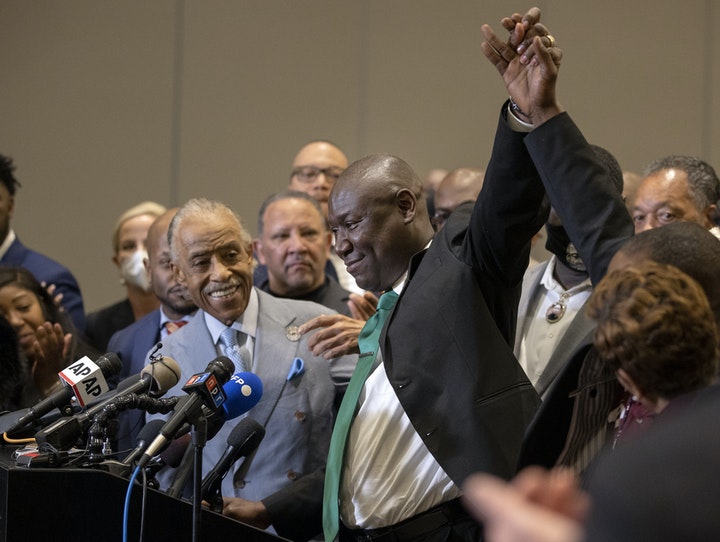 Attorney Ben Crump spoke with the family of George Floyd at a news conference held after the verdict in the murder trial of former Minneapolis police Officer Derek Chauvin, on Tuesday, April 20, 2021, in Minneapolis. (Carlos Gonzalez/Minneapolis Star Tribune/TNS)

“Today we are able to breathe again,” Floyd’s brother Philonise Floyd said as he and other family members teared up in joy and relief.

But one by one, Floyd’s brothers, nephew, aunt and others also told a throng of reporters that the push for police reform that Floyd’s death sparked cannot end with the jury decision.

Floyd’s family members called on Congress to pass the George Floyd Justice in Policing Act, which passed the House but has yet to clear the Senate. His family held the post-verdict news conference at a downtown Minneapolis hotel, along with the Revs. Al Sharpton and Jesse Jackson. Sharpton also stressed that the fight for change is not over but said, “This gives us the energy to fight on.”

Crump said Biden talked about how “We are all a better America today.” But, Crump noted, the president said they have to build on this moment.

Family members and attorneys repeatedly thanked the advocates who have been demanding change in Minneapolis and other cities across the world, and applauded Minnesota Attorney General Keith Ellison, whose office prosecuted the case against Chauvin.

Many of Floyd’s loved ones emphasized the importance of the moment in the arc of history — Philonise called Emmett Till “the first George Floyd” — and stressed that they want to make the world a better place for young people, like Floyd’s daughter Gianna, who was at the news conference.

But they also reflected on the man whose death triggered a national tidal wave of action.

“Every day of my life I will salute him,” Terrence Floyd said of his brother, who he said showed him how to be strong, respectful and speak his mind. “I will miss him, but now I know he’s in history,” he said. “What a day to be a Floyd, man.”