SIU and government: A history of SIU’s relationship with state and national legislature 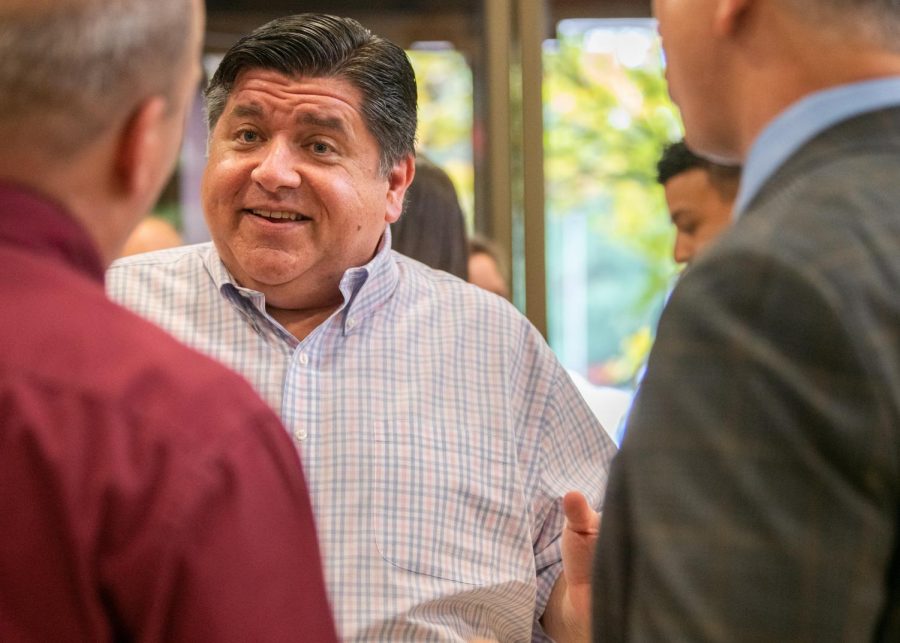 Governor JB Pritzker speaks to community members on Friday, Aug. 23, 2019 inside Paul Simon Public Policy Institute during a meet and greet with legislatures.

SIU’s decline is partially political in nature with rapidly declining enrollment, a staff exodus, a lack of funding and over two years of imbalanced budgets to blame.

As a public university, SIU is a part of the government, its funding, programs and the people who run it have been a political talking point for both parties.

A major division between SIU and other institutions of higher learning and the Illinois government was the state budget impasse between the fiscal years 2015 and 2017.

Governor Rauner, along with former governor Jim Edgar, was invited to be the keynote speaker at SIU’s spring 2015 graduation ceremony. Over 2,700 people signed a petition on change.org to replace Governor Rauner with a different keynote speaker for commencement for cutting $44 million from SIU Carbondale’s budget.

“How can anyone be expected to celebrate progress when our keynote speaker is someone who only intends to set us back?” Emily Neal, the creator of the petition, wrote.

Rauner announced at his first state of state a “Turnaround Agenda”, a pro-business proposal aimed to increase jobs across the state, freeze property taxes and enact term limits. The democratic legislature, led by Illinois Speaker of the House Mike Madigan, opposed the turnaround agenda and wanted to increase taxes.

The legislature passed budget bills before the fiscal year deadline in Jun. 2015. Rauner vetoed nearly all the bills, including the ones funding higher education.

“Students need to realize how much our university does receive from the state of Illinois,” Adrian Miller, the SIU student trustee for the Fall 2014 and Spring 2015 academic year, said in a 2014 article for the DE.

While a formal budget wasn’t approved, in Apr. 2016, Governor Rauner signed into law a higher education funding bill that only gave 34% of the funding marked for education.

As reported by the DE, for FY 2016, SIU received $58 million from the stopgap bill. According to a 2016 article from the Daily Egyptian, then-SIU President Randy Dunn was expecting $140 million more from the state.

Enrollment for Fall 2016 dipped below 16,000 students for the first time in 50 years a  seven and a half percent decrease from Fall 2015. As reported in the DE, then-Chancellor Brad Cowell attributed one of the factors of the enrollment decrease to the budget crisis.

The Illinois House overrode Rauner’s veto of the House’s budget on Jul. 6, 2017, ending the stalemate and providing funding for state services again.

Governor JB Pritzker, a Democrat, has not yet had issues negotiating a budget with the Illinois state legislature.

Pritzker has visited the SIU campus four times so far in his term; once in August 2019 for a political breakfast, once in January 2020 to unveil new plans for the Communications Building, once in February 2020 to announce a DCFS facility, and once in August 2020 to talk about Jackson County’s response to the COVID-19 pandemic.

“I’m so proud to see the SIU system on the rise,” Pritzker said in Feb. 2020. “After years of neglect, my administration is stabilizing higher education so all can succeed.”

Some state officials who currently serve in the state government who graduated from SIU include  Rep Will Davis of the 30th district, and Illinois’s director of agriculture Jerry Costello II.

A variety of presidents have visited SIU’s campus. Most of them have visited for their campaign, including Harry Truman, John F. Kennedy, Richard Nixon for his unsuccessful campaign in 1960, Jimmy Carter, George Bush as vice president for Ronald Reagan, and Bill Clinton.

“We have worked hard in the last 2 and a half years to expand scholarships like Pell grants for deserving students, and we have worked very very hard on the direct loan initiative,” Clinton said. “This year, I learned at this campus, you went to the direct loan program and 11,000 students got direct college loans. And they didn’t have to spend so many hours filling out forms or a day waiting in line at the bursar’s office this year because the program works.”

Then Illinois Senator Barack Obama was the keynote speaker at SIU’s Agricultural Innovation Day on Apr. 23, 2005, and highlighted their 50 year anniversary and the advancements the School of Agriculture made in the half-century.

“The work you’re doing here not only has the potential to improve the lives of people in Illinois and across the world; it offers the opportunity to develop new ideas that will lead to new jobs and a new competitive edge for America in the 21st century,” Obama said to students at the event. “This is the way we can win in the global economy, and here at this school in this Illinois small town, you’re helping us get there.”