Bradley cools off SIU offense to claim three out of four 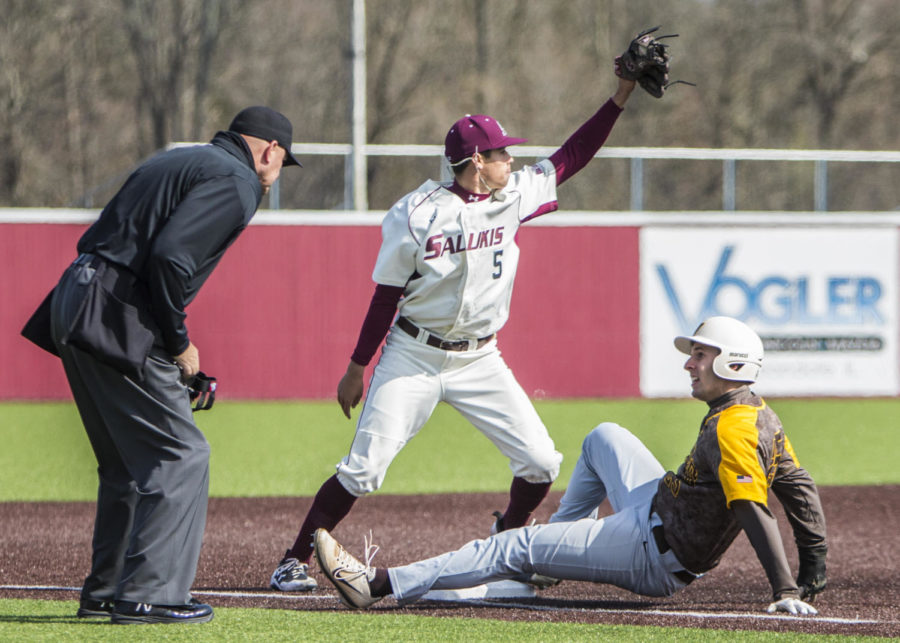 SIU took one game in their four game set against the Bradley Braves over the weekend, with the Braves winning three straight over Southern after dropping game one.

Bradley pitchers held Southern hitters to only 19 hits and eight runs over the four game series, with five of the runs coming in SIU’s lone win on Friday.

In game one of the matchup on Friday, the Salukis jumped out to a 5-0 lead by the third inning and the bullpen held on to win for SIU.

Senior first baseman Philip Archer then tacked on another run for SIU with a two-out single, that brought sophomore outfielder Tristan Peters home to stake out a 3-0 lead after one inning.

After scoring one more in the second, a solo home run by sophomore outfielder Vinni Massaglia put Southern on top 5-0.

The Saluki bullpen was able to hold on for the win, giving up three more runs to the Braves after Lewis’ departure from the game with junior Trey McDaniel picking up his sixth save of the year in the 5-4 win.

On day two, Bradley took both games from Southern with the first game in the doubleheader lasting only seven innings.

In game one junior pitcher Noah Farmer got the nod to start the game going five innings in the game allowing two runs on six hits.

SIU was able to pick up one run in the fourth inning,  Neville doubled to left field and he then came home on a ground out by junior outfielder JT Weber.

The Salukis threatened in both the fifth and seventh innings on the Braves, with Bradley leading 2-1 but Bradley ended both threats in route to their 2-1 seven inning win.

In the seventh inning, Southern had Massaglia on second and junior infielder Grey Epps on first with two outs, but with junior outfielder Brad Hudson in to pinch run for Massaglia he was caught stealing third to end the game.

Game two of the doubleheader also proved to be a rubber matchup between pitchers, with senior pitcher Brad Harrison getting the nod to start.

Harrison went eight innings for Southern allowing only two runs on six hits while striking out 10.

SIU jumped out to a one run lead in the first inning with Weber and Neville on base, an error by the shortstop on a swing from Peters, brought Weber home.

The Braves then answered with a run of their own in the third inning to knot the score at one, when senior infielder Bryan Dougherty doubled in freshman infielder Ryan Vogel.

Both teams remained locked at one, until the fifth inning when SIU retook the lead with a home run by Weber to left field.

In the sixth inning, Bradley answered the home run by Weber using a double by freshman infielder TJ Manteufel and a single by sophomore catcher Conner O’Brien.

Both teams remained locked at two until the Braves walked off the field with a home run from O’Brien in the ninth inning to win 3-2 and sweep the doubleheader from Southern.

In the fourth and final game of the series, Bradley won 6-0 over SIU, allowing only four baserunners on two hits and two walks.

The Braves got on the board in the third inning using three straight singles to push two runs across the plate on SIU starting pitcher off Ben Chapman.

Bradley tacked on two more runs when Manteufel homered to left field to widen the Braves lead out to 4-0.

Bradley starter junior pitcher Brooks Gosswein held the SIU offense at bay allowing only two base runners through eight innings, with a walk and one hit.

The Braves added two more insurance runs in the bottom half of the eighth, and the Salukis were forced to score six runs with three outs left in the game.

With two outs, Weber reached base on a single and Neville followed him with a walk, but Bradley junior pitcher Theron Denlinger needed only 26 pitches to get three outs as Southern dropped the third game in a row in the series 6-0.

Next up, SIU will travel to Valparaiso April 23-25, with first pitch on Friday set for 3 pm.