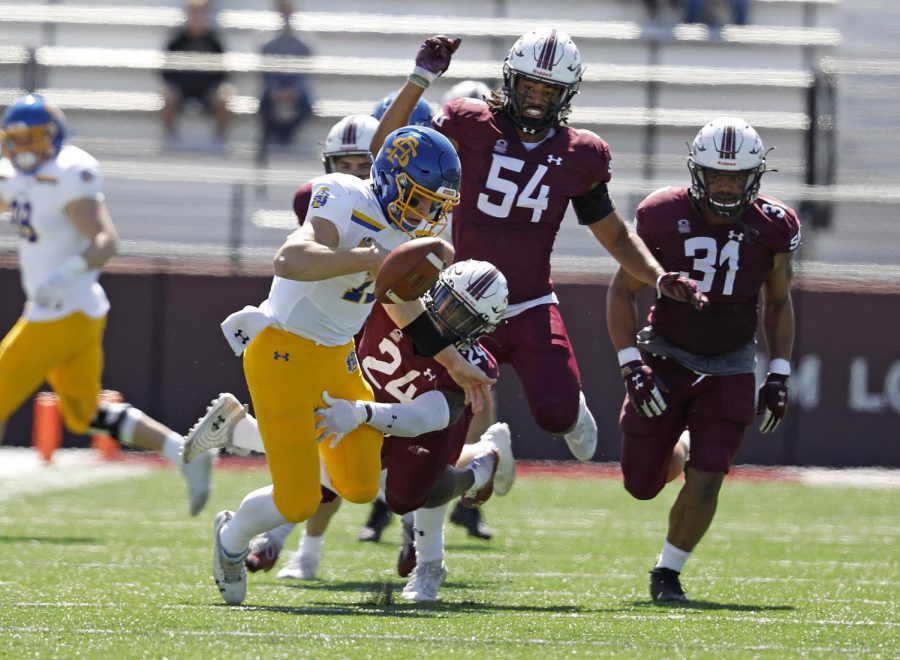 Saluki safety, Qua Brown, 24, forces the Jackrabbits' quarterback to fumble the ball, while linebackers, Bryce Notree, 54, and Bryson Strong, 31, are in hot pursuit, during Saturday’s game at Saluki Stadium on March 20, 2021. SIU lost to South Dakota State by the score of 44-3.

Southern Illinois University football (4-3, 3-3 MVC), who is ranked No. 18, is preparing to play their final game of the regular season against the No.17 Southeastern Louisiana Lions (4-2, 4-2 Southland).

Head coach Nick Hill spoke in his weekly conference on Monday about the game and being able to prepare for the game.

“Not having a game and then, you know, being able to find a game in Southeastern Louisiana, I’m just excited for our players, excited for our coaches, glad it’s Monday and we’re preparing for a game and look forward to a good weekend against a really tough opponent,” Hill said.

SIU previously had their last two scheduled games canceled after both Illinois State and Western Illinois opted out of the remainder of the season.

The Salukis have already won games against three ranked teams this season, and Southeastern Louisiana gives SIU a chance to get a fourth before the playoff committee will decide which 16 teams will make the FCS playoffs. The Salukis last made the playoffs in 2009.

Salukis junior inside linebacker Bryson Strong said the team was excited when they found out there would be another game this season.

“We were already looking forward to hopefully getting another game so when we got the news as a whole unit group out there on the football field,” Strong said. “I believe we were out there on Sunday or something like that and just, everybody’s just excited, you know, nobody wants to see us end on canceled games. So just being able to strap it up with the guys one more time this spring and then hopefully with the opportunity of an at-large bid into the playoffs.”

Hill said the team isn’t paying too much attention to the playoff implications of the game and is just focused on winning.

“Obviously if we lose then we’re definitely not in the playoffs so yeah. I mean we’re excited, our 100% concentration is on this football game and playing and trying to find a way to come out of there with a win and we’re not talking about anything else,” Hill said. “There’s nothing to talk about really, it’s a moot point. I mean we’ve got to go win this game and give ourselves a shot.”

Strong said he isn’t too worried about the playoff selection because it’s out of his control and said the Southeastern Louisiana win over Nicholls State on April 10 gives the Salukis a better chance since the Lions stayed ranked with that win.

The Lions have five running backs with over 100 yards and over 2,200 yards from senior quarterback Cole Kelley this season. Strong said the team is preparing but knows they have a good offense.

“They’ve got a good stable of backs there, I mean as a unit they’re a pretty talented group of guys Strong said The quarterback, as a sound like a pretty good NFL prospect, the next couple years and it’s not this year. So we’re definitely taking the game seriously and taking the game plan, seriously, we’re gonna do everything we can to get the win.”

The Salukis and Lions will kick off from Saluki Stadium at 12 p.m. on Saturday, April 17.