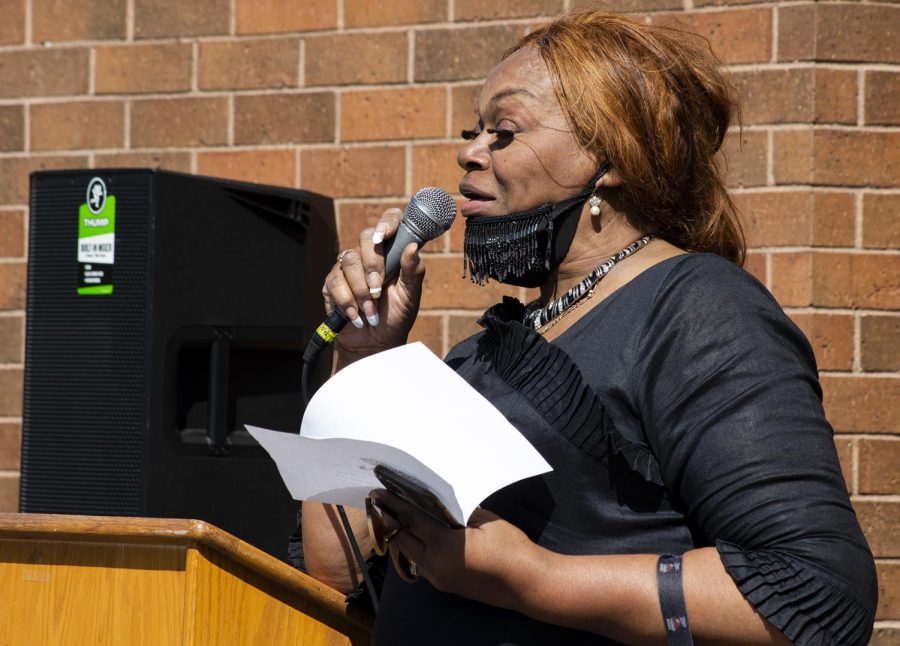 Carbondale City Council candidate Ginger Rye Sanders speaks during the Get Out the Vote Rally at the Eurma Hayes Community Center in Carbondale, Ill. April 3, 2021. The rally was held to help raise awareness for the upcoming general election in Carbondale and to encourage people from a low voter turnout area to get to the polls on Tuesday. “We’re encouraging the people to be part of the process,” Sanders said. “Be part of the political process because your vote does matter. We should be involved in what’s going on in Carbondale and we should use the voice that has been given to us through the vote, to vote and to be a part of this democratic process that we have here in Carbondale.”

With Carolin Harvey securing her third term on City Council and newcomer Ginger Rye Sanders getting a seat at the table, the two women seek to invoke changes with diversity and inclusion in all levels of the city’s government to better reflect the diversity of the city itself.

Sanders comes to the council with a background in community activism and starting the organization Women for Change, Carbondale: Unity in the Community.

“I wanted to do more at a level of government that would really affect change,” Sanders said.

Women for Change was created to give a stronger voice to citizens in the northeast side of town after having a meeting with city officials Sanders had after an incident involving her grandson.

“I was laying in the bed and all this noise, this ruckus,” Sanders said. “I woke up and I went outdoors […] and all these people were running down the street, my yard was full of people and my grandson was being escorted by police.”

According to Sanders, a man was shot and killed by another man and her grandson was walking through the parking lot where the incident happened and went to check on the man who was shot.

“I was so upset and outraged. I said, ‘how in the world could this happen in the neighborhood that I grew up in,’” Sanders said.

“In my outrage, I talked to a few people in the community and the only people that I could get to hear me were women,” Sanders said. “I told the preachers, I told everybody, but nobody heard me but women.”

On election night, Sanders initially thought she lost her bid for a seat on the city council as she watched the results come in at the Jackson County Courthouse.

“I was looking at the monitors, which I did not understand, since they had Jackson County here, another county over there,” Sanders said. “There was a lady from the school board I knew, Mrs. Waters, she said, ‘Ginger, you’re in third place.’[…] I said, ‘third place? I’m going to lose.’ I had not even thought about the process.”

Carolin Harvey, who went to the courthouse later that evening, let Sanders know she had one of the three available seats on City Council, according to Sanders.

“I know I have lots of work to do. I’m glad to be a voice for communities that have been underserved and underrepresented. I don’t say that as a cliche. I say that because I am one of them, so this is personal for me,” Sanders said.

Sanders hopes to be able to push more diversity and inclusion within city government.

“I’m working on something I like to call ‘Project 42,’” Sanders said. “Project 42 is something that I would like to see in Carbondale in that it deal with diversity and inclusion and the demographics, which say that there are 42 minorities, but none of the percentages reflect that across the board.”

It is Sanders’ goal to have the city commit to more representation in city government.

“I just feel that there should not be a city government that has 82% of individuals that are White,” Sanders said. “I just think that that’s a problem, all by itself.”

Harvey, who has won reelection for a third term, agrees with Sanders that there should be more diversity and inclusivity with the city.

“Carbondale is a very diverse town,” Harvey said. “That’s one of the main draws to Carbondale is all that we offer through Southern Illinois University, with people from all over the world being here in Carbondale and that needs to be represented accordingly. No matter where you’re from, you should be able to relate to someway, somehow, to those people who are making decisions that affect your life on a personal, day to day basis.”

While Harvey doesn’t come back to council with any set agenda, aside from “do what the citizens of Carbondale want me to do,” one of the issues she would like to see be addressed is providing relief for the city’s homeless population.

“If there’s a way that we can get some of our local landlords, or even … property owners, who have vacant properties to in someway donate or give those to an organization or to the city so the house cne be rehabbed for homeless or low-to-medium income families, I would be eternally grateful,” Harvey said.

Another pursuit Harvey would like to pass in council is to provide relief for local businesses affected by the on-going COVID-19 pandemic.

While it’s not a city council issue, Harvey would like to see the city’s children go back to school, full-time in the fall for next year also.

“Hopefully, they will be able to be back in school full-time with their friends and teachers come Sept. or August, whenever school starts,” Harvey said.

Harvey is looking forward to settling the issue with merging the park district with the city, as was voted on last year.

“I’m ready to see some progress being made on that as far as if we are going to merge certain functions of the park district with the city,” Harvey said. “In my head, that only makes sense.”

With the city having an accounting department and lawyer, it saves the park district time and money in having to hire an accounting agency or accountant and keeping a paying retainer fees to a lawyer.

“At this point, in theory, I’m fully supportive of merging some of the functions,” Harvey said. “I say in theory because it would depend on two things: one what the final draft or final proposal would look like and two is that what the citizens would actually want when they see that final proposal.”

Both Harvey and Sanders want to see the Eurma Hayes Center become a place in the community for citizens to obtain resources for aid.

The current proposed plan has the Carbondale police department occupying a space in the center, which citizens have railed against. However, both Harvey and Sanders are in support of having the police have a presence in the center.

“I see that as a very positive thing because it would be a resource center, not a police station,” Harvey said. “Hopefully there would be some interaction with police who are not necessarily there to investigate or deal with a negative situation.”

Harvey acknowledges the on-going conversation about having the police department represented as one of the potential resources available to the citizens at the center, however emphasized her responsibility to the citizens.

“If the citizens voice to me that they don’t want it then if I have something to say about it, then my vote is ‘no,’” Harvey said. “If there’s enough people who want it and support it, of course, I would vote for that.”

Sanders views having a police presence in the Eurma Hayes Center as means to help bridge the gap between the community and police.

“There’s a real big gap between community and police,” Sanders said. “How in the world can you have community police reform if we don’t want the police in the community? I think children should see someone that looks like them as a police [officer].”

The goal of the current Hayes Center board president is to provide resources for the community to use, according to Sanders.

“If there’s anything that we can help to be a resource to help the community, I am all for it,” Sanders said.