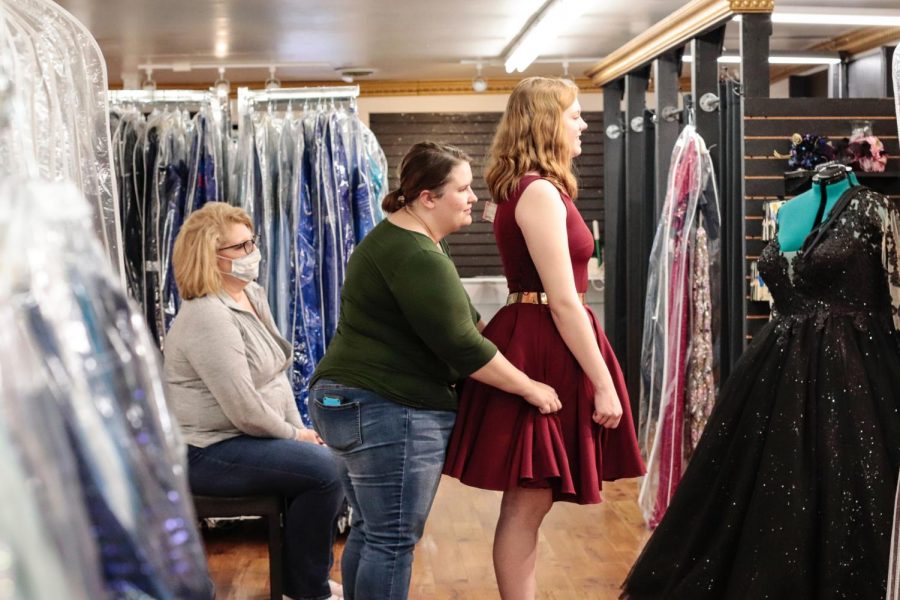 Nicole Miskelley helps fit a client for a dress April 3, 2021, at Melise’s Boutique in Marion, Ill. Miskelley entered into the formal wear business in 2019 and said it was difficult to begin her business during the pandemic. “We were shut down March of last year up until about October [...] so it’s been really hard, especially it being my first year in business, trying to get everything going,” Miskelley said.

Southern Illinois is home to various family owned and operated businesses, from restaurants, to garages, to dress shops, many of which have struggled to keep their doors open because of the pandemic.

Owner and operator of Joyce’s Bridal, Michelle Holmes, faced issues at the beginning of the pandemic but through keeping the bridal side of the business open, she was able to keep her doors open.

“Joyce’s is not only a prom and pageants store, we carry bridal gowns as well,” Holmes said. “Weddings didn’t stop, people had small weddings in their backyards and small gatherings.”

January is when most of the inventory for the store is ordered, Holmes said. Holmes and her employees had to stay open for customers who had already paid and had dresses altered.

“While in lockdown, I was able to obtain two payroll protection loans, which helped me keep two of my employees paid throughout the whole pandemic,” Holmes said.

Holmes said the first three months of 2020 were amazing for business. But then come March, the shop closed its doors with a ton of inventory still for purchase.

“We didn’t know when we could open or when this would all end,” Holmes said. “We were worried that girls who had dresses in layaway weren’t going to be able to wear them.”

Luckily Holmes, her employees, and various other businesses were able to give students whose prom has been canceled a chance to wear their prom dresses and tuxedos.

“We called it SI Prom 2020 and it was held at the Pavilion in Marion,” Holmes said. “I enlisted help from sponsors and the city of Marion to make it possible.”

A total of 300 tickets were sold for SI Prom 2020. The money collected went back to students in scholarship money.

“Every senior that attended was eligible to sign up,” Holmes said. “Each senior that did attend received a scholarship of around $1,500.”

Holmes said the event went really well and she was happy she could bring a bit of normalcy to students in Southern Illinois.

“It was a mixed group,” Holmes said. “We had students from all over the area but it went really well and there were no issues.”

As of now, Holmes is seeing more business since it’s the middle of prom and wedding season.

“In March we’ve sold the most dresses so far,” Holmes said. “Schools are just now allowing or scheduling dances. Some schools are combining prom and homecoming making it “prom-coming.” Other schools are just having coronations or handling it in another way.”

Holmes says her team will keep being open for the community. They want to do what they can in a time like this.

“We’re open six days a week,” Holmes said. “Typically we would be open seven days a week, but I just don’t have the staffing anymore.”

Joyce’s Bridal isn’t the only dress outlet in Marion that faced issues during the pandemic. Melise’s Boutique owned by Melise Oakley has also struggled in staying open, paying employees and supplying the community with formal wear needs.

“Owning your own business is challenging,” Oakley said. “You get thrown curve balls and you’ve just gotta figure it out.”

Oakley said it’s been hit or miss with her store being open and operating.

“I have a full time job with Southern Illinois Hospice as well, so keeping that job and running a business has been all because of the grace of God,” Oakley said.

Oakley is the fifth person in her family to own a business in Marion.

“My father always told me if I had good people around me that I could do anything, and I believe I’ve got the best people working with me,” Oakley said.

“Mr. Tuxedo and Bridal started out as a chain, I was lucky enough to receive ownership before the chain fell through,” Hubbs said.

Hubbs has seen a lot in her 30 years of working in the wedding and prom dress industry, but nothing like a pandemic.

“Like many dress shops in the area, I had new inventory for the upcoming season last year,” Hubbs said. “Then right when business normally picks up, the world stopped. I decided this year to not buy any new prom dresses and sell the ones I got last year for 50% off.”

Hubbs is gradually getting back to normal sales and business hours. As of now, Mr. Tuxedo and Bridal is extremely short staffed.

“It’s normally just me through the week,” Hubbs said. “I have help on the weekends and an in house seamstress. But I’m keeping my payroll down until I can get back to normal.”

Hubbs said in the first four months of this year, business has picked up.

“During prom season we are pretty well busy all the time,” Hubbs said. “I’ve been selling a lot of prom dresses since selling them at 50% off. A lot of people are trying to save and hold on to money at a time like this; at half price, it’s more affordable.”