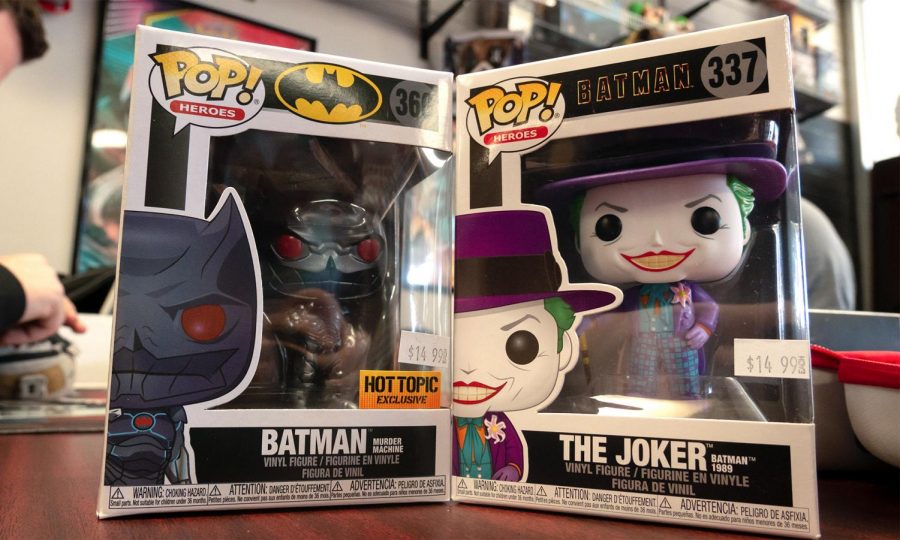 Two Funko POP figures sit together awaiting to be stocked on the shelves at RND Collectibles Thursday, Mach 4, 2021, in Carbondale, Ill. “It’s pop culture man, I think that’s why people love it. You know, anything you can think of there’s probably a POP figure of it. It’s just an easy way to enjoy your fandom,” Randy Arena, owner of RND Collectibles said.

Collaborating with Disney, DC Comics, the NFL and BTS to make fan-favorite merchandise might sound like a dream to some, but for Funko president Andrew Perlmutter, it’s all in a day’s work.

Perlmutter, a class of 2000 SIU graduate, knew he wanted to join the toy industry from a young age.

“I grew up around the toy business,” Perlmutter said. “My father and grandfather were toymakers so I knew early on that I wanted to follow in their footsteps.”

Perlmutter grew around Chicago in a suburb called Glencoe and came to SIU because it was known as a fun school.

“I was afraid of business classes because of all the math, I was originally a communications major at SIU,” Perlmutter said.

After graduating, Perlmutter went back to Chicago and started working for a staffing company called Onsite as a recruiter. He later moved to New York to start the job that would set him on the path to Funko: a sales representative at a company called Global Sales and Marketing. That company represented different toy lines to different retailers.

“The big line I started with was the game Cranium,” Perlmutter said. “It was really popular and from there I would sell the game to big accounts. I did that for a lot of companies for 11 to 12 years.”

One of the companies Perlmutter started representing around 2010 was Funko. He was an outsourced salesperson who was paid commission to link Funko to Barnes & Noble directly.

“Over the course of the next three years, I began breaking away from that company and started creating my own company called Bottle Rocket Collective,” Perlmutter said. “Then in 2013, the CEO of Funko asked me to come up to Seattle, Washington and run sales for his company.”

Perlmutter, his wife, and his three-week-old twins packed up and moved halfway across the country. Perlmutter worked as the head of sales for Funko for four years, then in 2017, he was promoted to president of the company.

“Moving was stressful; it was a giant leap of faith,” Perlmutter said. “I knew I could do it and we would be fine. But my wife who has faith in me was scared. She had just given birth and a move like that is a lot.”

Perlmutter said a typical day at work involves a lot of meetings and negotiations.

“A large portion of my time is dedicated to meetings,” Perlmutter said. “I will either meet with customers as in retailers like Walmart or Target, or I meet with the internal team.”

Meeting with the internal team involves talking with executives or heads of departments within the company, said Perlmutter.

“I have a lot of meetings about making sure the company is well informed and knows what’s happening across all leadership positions,” Perlmutter said. “That way they can make sure they can hit budget and sales targets.”

Perlmutter’s position involves everything from making sure the products are leaving the factories in Asia on time, to making sure Funko has purchase orders from retailers. There are departments that directly handle these issues but ultimately, it is up to Perlmutter to make sure that everything goes smoothly.

“We as a company are heavily licensed to produce trademarked products,” Perlmutter said. “We have over 1,100 different licensed properties that we work with. The license department works with brands that want to collaborate; if there is a problem or a company wants to collaborate with us and vice versa, I often get involved.”

Funko has worked with many different companies, bands, and artists on creating Pop! vinyls of iconic people and characters. One band in particular is K-Pop band BTS.

“When we started to get vibes that they were becoming a hot band, we reached out and found out who represented them,” Perlmutter said.” We explained that we’re a company that makes vinyl figures. We gave them a list of musicians we’ve already done then negotiated terms.”

Perlmutter said the negotiation process involves a minimum guarantee, which means Funko has to pay X amount of money to the licensor to get the rights of the license, regardless if Funko makes any profit off of said product.

Perlmutter’s favorite collaboration was a Golden Girls line in August of 2016.

“The Golden Girls line was my wife’s idea,” Perlmutter said. “I brought the idea to the company and they said that’s crazy, no one will want that. I pushed and pushed and it was finally made; since then it’s been really successful.”

From his favorite collab to his favorite part about working for the company itself, Perlmutter is honored to work for such a company.

“My favorite part of working for Funko is that it’s a fun place to work, the people who work here love what they do and are good at it,” Perlmutter said. “When people love what they do work-wise, it makes the work environment that much better.”

Staff reporter Sara Wangler can be reached at [email protected] or on Twitter at @sara_Wangler.