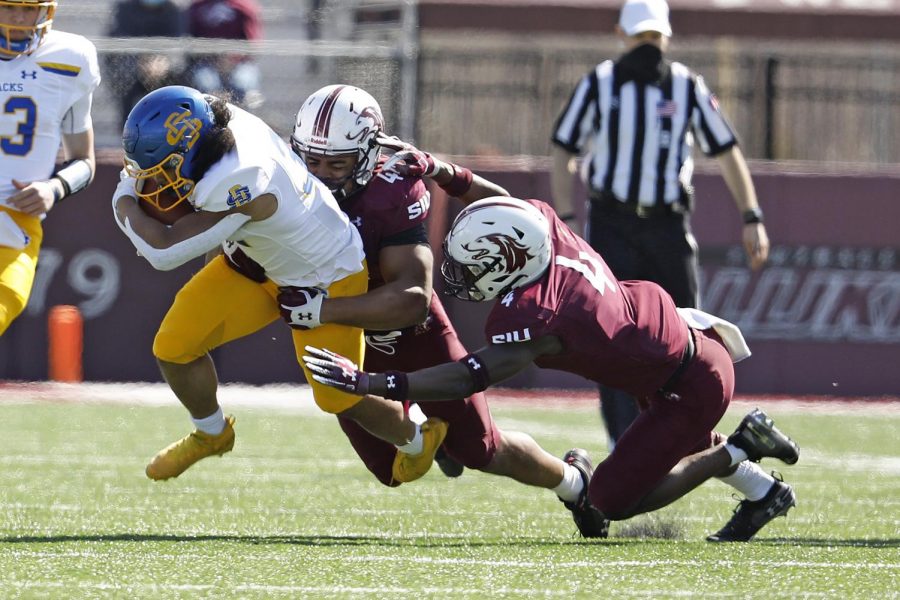 Saluki defenders, PJ Jules, 4, and Raquan Lindsey, 44, make a tackle during Saturday’s game at Saluki Stadium on March 20, 2021. SIU lost to South Dakota State by the score of 44-3.

Southern Illinois football (4-3, 3-3 MVC) will not play their final regular season game against Western Illinois that was scheduled for April 10 at 12 p.m.

Western Illinois announced in a statement on Monday April 5 that they’re opting out of their final game due to a lack of players available at key positions. Western Illinois (1-5,1-5 MVC) also canceled their April 17 game against South Dakota.

SIU will now have to wait for the payoff committee to determine if the Salukis will play again this year.

SIU has two top five wins, including their defeat of North Dakota State 38-14 on Feb. 27, who was ranked first at the time, as well as a 17-6 win over Northern Iowa on March 13.

The Salukis also had their game on April 3 against Illinois State canceled after the Redbirds opted out of the remainder of the season.

Head coach Nick Hill released a statement after the announcement that their final game would not be played, saying in part: “I am deeply disappointed. Disappointed for our players, our coaches, our fans and for our league,” Hill said.

Hill mentioned the playoffs in the statement as well.

“When the selection committee looks at the resumes of the teams that are still competing this spring, they will see our top 25 wins over SEMO, Northern Iowa and North Dakota State. More importantly, I hope they see that, regardless of the circumstances, the Salukis played,” (emphasis added by Hill). “I am incredibly proud of our football team,” Hill said.