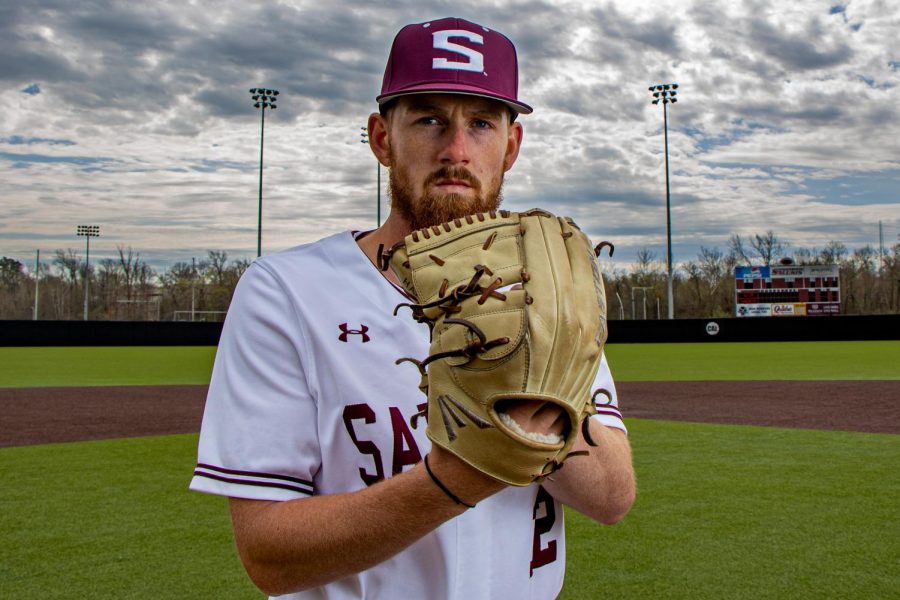 SIU pitcher, Brad Harrison, poses for a portrait in the bleachers at Itchy Jones Stadium on Wednesday, March 31, 2021 at SIU. Coming back after injuring his arm, the left-handed pitcher has been a steady arm in the Salukis' rotation. This season, Harrison threw seven innings where he struck out nine batters and two hits during a game against Marshall.

In the fall of 2018, all left-handed pitcher Brad Harrison could focus on with each pitch was the pain.

“It started in the fall of 2018; it was my junior year. In between innings my shoulder would start stiffening up,” Harrison said. “It would take longer and longer to try and loosen it up and get it going and then come season time it seemed like after three innings it would just lock up.”

Harrison, a junior in 2018, was granted an extra year of eligibility for 2021 because of the pandemic.

After getting some MRI’s done in the offseason off 2018, nothing came back conclusive on where the pain was coming from.

“I rehabbed all summer all fall and going into the season last year [2020] it just really didn’t get any better,” Harrison said. “I still couldn’t throw more than five innings comfortably.”

With the 2020 season being cancelled due to the COVID-19 pandemic, Harrison decided it was time to have another look at what the problem could be.

“When we got cancelled, I decided that if I wanted to come back I needed to get it fixed,” Harrison said. “I went and got an MRI in St. Louis with Doctor George Paletta. They found that I had a slap tear in my labrum, which means that it was torn in two separate spots.”

“Essentially, there was a little flap on my labrum that would catch up against the bone,” Harrison said. “It would shift and get caught and cause all kinds of pain.”

After the surgery in which the doctors removed the debris that was causing the catch, Harrison went through offseason rehab with Brandon Lee, the SIU baseball athletic trainer.

“It was a lot of times spent with Brandon Lee, our trainer. The amount of hours that we spent together in the last few years is ridiculous,” Harrison said. “He had a really good program with rehab exercises and treatment type stuff on top of a throwing program.”

With the pain, Harrison never felt like giving up and walking away from baseball, but the pain did cause the fun he had experienced with baseball in the past to diminish.

“It seemed like the last two years of baseball were not nearly as fun as they should have been,” Harrison said. “I love the game and every part of the game, but it’s just so mentally exhausting when everytime you tried  pick up a ball  to do what you love you just physically couldn’t.”

Harrison has pitched well this season, having pitched just over 34 innings racking up 44 strikeouts across four wins this season.

“It definitely does motivate me knowing what Brad’s went through,” sophomore pitcher Trey McDaniel said. “How passionate he is about the game and how he carries himself. He comes to the field everyday no matter what.”

Across seven starts this season, there has only been one game where Harrison has not had five strikeouts or more despite the fact that he does not have an upper 90 mile per hour fastball.

“He mixes it up pretty well, he just uses his two pitch mix,” McDaniel said. “Coach [Jamieson] does a good job with having a plan before the game.”

The offseason rehab Harrison did helped increase his arm strength, which has led to some of the success Harrison has had this year.

“Because of the added arm strength, his slider has gotten better, his later breaking is harder for the hitters to know whether it’s going to be a strike or out of the strike zone,” pitching coach Time Jamieson said.

“He’s got a pretty good idea of who he is as a pitcher and what his strengths are, and we try to guide him toward those strengths,” Jamieson said. “He’s left- handed which, makes him tougher to hit than right handers because hitters don’t see left handers that much.”

Harrison’s injury helped him to realize just how limited his time as a college pitcher can be.

“Before our first game this year, Coach Rhodes talked about there was an interview with a former player,” Harrison said. “He said if it was your last game ever how hard would you play?”

And that statement has been the focus for Harrison this season, pitching each game as if it could be his last.

“It’s really difficult to say that COVID was a blessing with everything that’s happened in the past year, in all of the tragedy that’s really gone on,” Harrison said. “For me, just to have this opportunity to come back and be healthy, it’s really given me an opportunity to appreciate every moment I get to spend at the baseball field with the guys.”