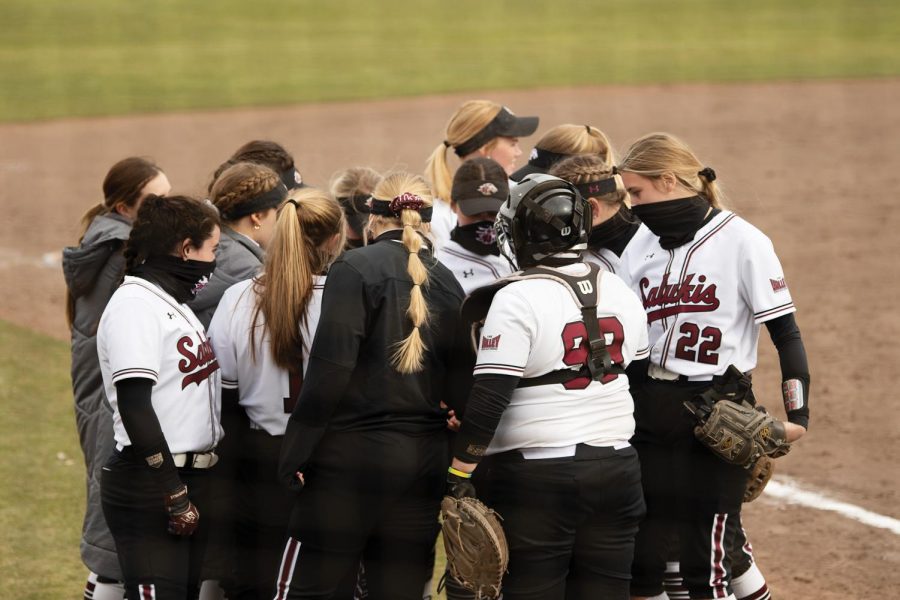 SIU players huddle up during a game against Northern Kentucky University on Friday, Mar. 5, 2021 at Charlotte Softball Stadium in Carbondale, Ill.

Southern Illinois softball (26-6, 8-3 MVC) swept the Loyola Chicago Ramblers (5-19,1-7 MVC). The Salukis won both games in the double header on Friday and won the final game on Saturday to pick up the sweep in Chicago.

Game one had no score through five innings before the Salukis scored ten runs in the top of the sixth. The first two runs scored after freshman outfielder Elizabeth Warwick and junior catcher Sidney Sikes were hit by a pitch and walked after the bases were loaded.

The rally was capped off by doubles by graduate student catcher Katelyn Massa and graduate student infielder Maddy Vermejan who both had three rbi doubles in the inning. The game was then closed out in the bottom of the sixth due to the ten run rule.

The Salukis started off quickly by putting up 5 runs in the first three innings.

In the second inning, freshman infielders Rylie Hamilton and Elizabeth Huckleberry singled with two outs. Vermejan then tripled to score them both and give SIU a 2-0 lead.

The next inning, SIU would add on three more runs to take a commanding 5-0 lead.

In the bottom of the third inning, Loyola scored their only run of the three game series on a RBI single from sophomore infielder Amelia Thomas.

SIU would once again end the game in six innings as they took an 11-run lead with a six run sixth inning.

After loading the bases, SIU scored four consecutive runs on three walks and a hit by pitch. A Huckleberry two RBI double brought in the two final runs.

Freshman right handed pitcher Carlee Jo Clark pitched all six innings and picked up her sixth win of the year.

On Saturday, SIU looked to finish off the sweep and were able to score early.

The Salukis would take a 2-0 lead in the third inning. Senior infielder Jenny Jansen doubled home both Vermejan and Huckleberry.

The final run of the game came in the sixth, when freshman outfielder Bailey Caylor singled home Warwick.

Madi Eberle pitched all seven innings of the shutout win while only allowing two hits.

The Salukis will now come back home as they host Evansville next Saturday, April 10, and Sunday, April 11. There will be a double header on Saturday