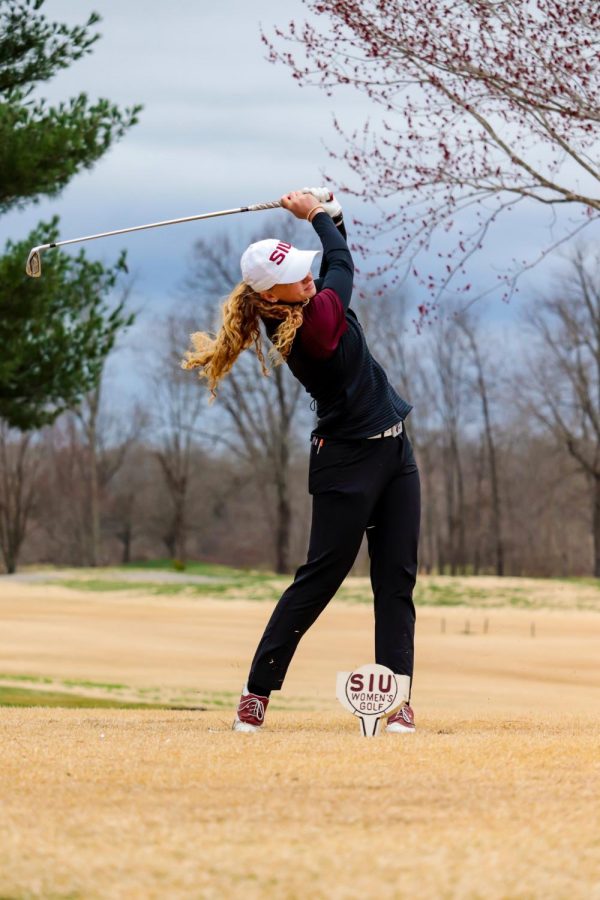 Erica Kerr tees off at the Battle Between Southern and Bradley March 14, 2021, at Hickory Ridge Golf Course in Carbondale, Ill.

The Southern Illinois women’s golf team finished seventh overall out of 16 teams in their Diane Daugherty invite in Kirkwood Mo., a three-round tournament on March 29 and 30 with 90 players competing.

The Salukis finished with an overall score of 93 over par, while the tournament winners, Arkansas State, finished with 62 over par.

Southern Illinois was led in scoring by fifth year player Erica Kerr with a score of 24 over par throughout the tournament. Freshman Janie Samattiyadeekul finished just one stroke back of Kerr and finished in 32nd individually.

Nine of the 10 Missouri Valley teams competed, with only Evansville not in the tournament. Of those nine teams, SIU finished fourth behind Illinois State, and Bradley and Missouri State, who finished in third through fifth, respectively.

SIU will next compete on Friday, April 9, and Saturday, April 10, at the Jan Weaver Invitational in Murray, Ky., and will be hosted by Murray State.