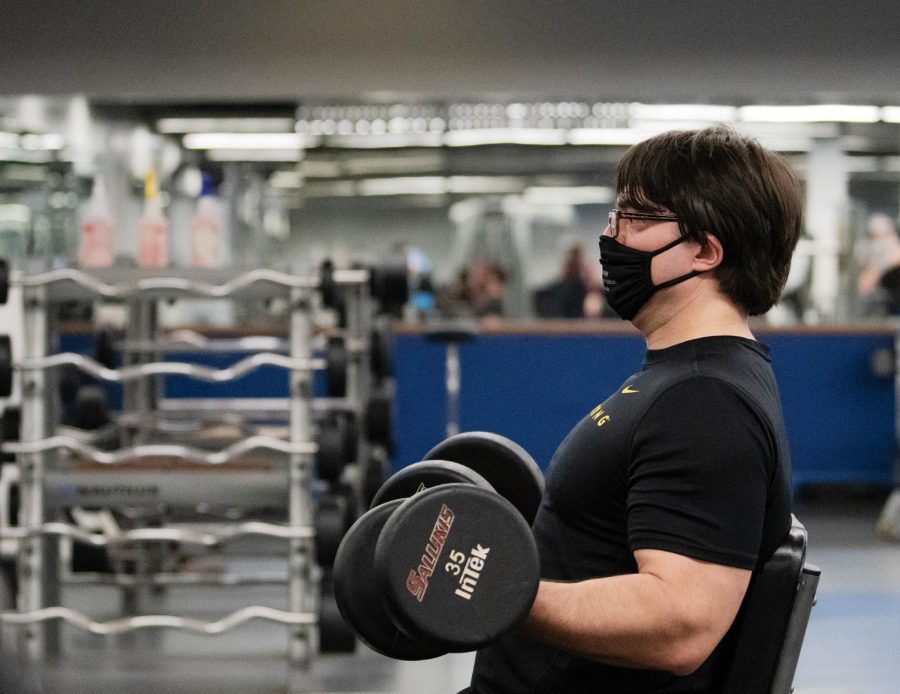 Kenneth Christensen, a resident of Carbondale, performs bicep curls on Sunday March 21, 2021 at the SIU Student Rec Center, in Carbondale Ill. Christensen believes working out every part of the body is very essential for maintaining physical health. “I copied routines of famous body builders and started working out to get in shape,” Christensen said.

By Sara Wangler and Riley Hemken

Carbondale resident and SIU alumnus Kenneth Christensen has been on a wild ride with his mental, physical and emotional health. His journey of self-discovery has involved losses, wins and sacrifices all while working and going to school.

He used to bodybuild, then stopped working out and was pushing 270 pounds last March.

Christensen said bodybuilding was really fascinating when he was younger and he started looking at different pictures of bodybuilders and powerlifters. He decided that’s what he wanted to do. He then got more involved at the age of 13 or 14.

“I started lifting, I started looking more hardcore. Then when I turned 14, I experienced my athletic abilities increase and people would notice,”  Christensen said.

Christensen had a huge ego boost and felt good, so he just kept going forward in bodybuilding.

“I would say that the biggest impact really on my life was when my mom passed away in 2007,” Christensen said. “The aftermath is a long-drawn-out story but I got kicked out of my house. My one relative took my inheritance and I went through a prolonged period of depression. I lived on the streets for a few years about a year-and-a-half to two years and then I finally came down here and went back to school.”

Christensen began seeing changes in his body, and he became more and more tired. The history of health issues within his family began to be a bigger concern.

“One of the things that inspired me was my jiu-jitsu instructor,” Christensen said. “He’s in his seventies now and he still does power lifts. He kept trying to suggest that when your back goes out at a certain age you were never coming back from that.”

What he said to Christensen started to motivate him. He wanted to get back into his previous lifestyle; it was the same thing that happened when he was 14 years old looking at Arnold Schwarzenegger.

“Letting myself know that I can do this, I looked up his old weight lifting routine and I started to copy him in some areas that I could,” Christensen said. “Then I went from there and then just started pushing forward losing weight [and] started feeling better.”

Previously, Christensen had back pain; since he is practicing a healthier lifestyle, he doesn’t have any back pain now.

After he graduated, Christensen went through a relapse period. He felt history repeat itself and began going back into an unhealthy cycle.

“I didn’t have any friends at the time and it was just like a vicious circle,” Christensen said. “I couldn’t find the job that I went to school for, I was working odd jobs here and there.”

Christensen reached 270 pounds in March 2020. His breaking point came in June of that year after he experienced an accident requiring surgery.

“I was working on  my roof because we were getting a lot of rain and I was getting tired of the leaking,”  Christensen said.

On June 30, 2020, he was coming off the roof, and the ladder he was on broke. He grabbed the metal strap, pulled it off and as he came down, he severed his right middle finger and left ring finger.

“I had to go get those reattached; they were hanging by the skin, so I had to go through surgery that day and I was just absolutely miserable,” Christensen said. “I also hit my head off the ground so I was kind of disoriented. I thought this has got to stop. I cannot do this anymore, it was my breaking point.”

One of the things Christensen started doing and realized more and more is, if he really wants to do something, he can achieve it.

“It was about two weeks after I severed my fingers. I went to the rec center and I started jogging a little bit and using the exercise machines,” Christensen said.

Christensen has no idea how he did it. He didn’t use his hands but only his elbow when using the machines. He got weird stares, some might think “Oh, there’s the crazy guy with a cast on his hand lifting weights.”

“Well, you’ll see the crazy guy in a few months who would be totally jacked and so motivated,” Christensen said. “I started seeing this in myself, I started pushing harder than ever.”

Christensen was still working with his doctor and asked him what his limits were with his hand.  The doctor said it would be about two to three months before he could fully function.

“I already accepted that, so I just did what I could do. When he said ‘you’re all clear,’ I just let loose,” Christesen said.  “I became more and more confident, I applied myself to martial arts and the raising of praying mantises as well as patience in weight lifting again.”

Christensen has a lot of advice, but step one for a person getting out of the rut is looking in the mirror and accepting yourself for who you are.

“I think that the biggest problem with a lot of people is that they look at the mirror they don’t like themselves,” Christensen said. “They tear themselves down and don’t give themselves a chance.”

Christensen said the number one thing is to accept yourself for who you are. Number two is to look at the gifts and talents you have, then see how you can measure up in each aspect of life and really work on those.

“I think those are the two biggest things, number three is hard work,” Christensen said. “You’ve got to work hard for what you want, if you just sit there and continue the pity party you’re never going to get there.”

Christensen had to realize his limits when starting out again, he needed to ease into this lifestyle.

“Set realistic goals for yourself, that’s my best advice that I have for people, go get a degree as well,” Christensen said. “Go to school and get a degree, be willing to give up some things because you’re going to have to make some sacrifices if you really want to move forward.”