Is it too late for the Equal Rights Amendment? 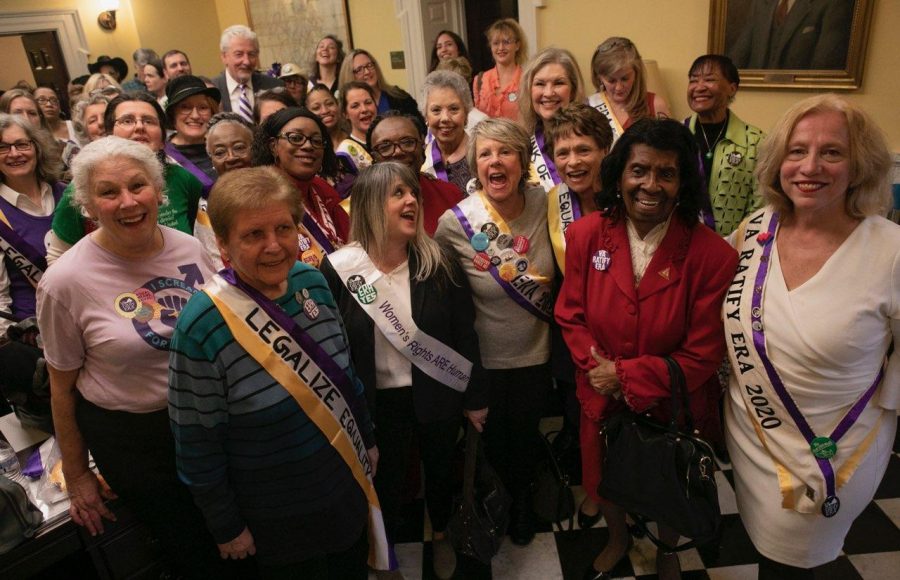 An overflow crowd of supporters of the Equal Rights Amendment wait to be allowed into the gallery of the House of Delegates Wednesday, Jan. 15, 2020 in Richmond, Virginia.

The two century wait for American women to be fully recognized by the Constitution may be coming to an end now that 38 states have ratified the Equal Rights Amendment. But only if courts rule that the deadline can be extended.

The Equal Rights Amendment’s main goal is to protect and ensure equal rights for all Americans without discrimination on the basis of sex. It was passed by Congress in 1972 but didn’t receive the required 38 state ratifications before a congressional deadline.

Having the Equal Rights Amendment could help with pay inequity, pregnancy discrimination, domestic violence and many other things that have targeted women in America in an unequal way according to The National Organization for Women

Retired journalist Margaret Freivogel worked at the Washington Bureau of the St. Louis Post-Dispatch for 12 years in the 1980s focusing on women in politics and family issues and civil rights. She covered the ERA extensively.

Freivogel wrote a few stories on Phyllis Schlafly, an American attorney from St. Louis, Missouri, and a conservative activist who opposed the ERA throughout her career.

Schlafly was a conservative American attorney who was anti-feminism, LGBTQ rights, abortion and successfully campaigned against the ratification of the ERA.

Schlafly went to Washington University St.Louis where she got her masters degree in political science and her master’s degree from Radcliffe College in government. She settled down in Alton, Illinois where she had six children with her husband Fred Schlafly Jr.

In this article Freivogel compares Schlafly to former president Trump and reflects on her experiences with Schlafly and how she presented herself during the time the ERA was trying to be passed.

Freivogel said people who were opposed to the ERA were looking for an excuse and Phyllis Schlafly was that excuse for them.

“Phyllis Schlafly is a very complicated person who, as people who opposed her said at the time, she had a very independent career and led a very public life while campaigning the idea that women needed to be able to stay home and take care of her kids,” Freivogel said.

As of right now, according to NOW, the ERA missed its deadline to get at least 38 states to ratify the amendment in the 1970s, but as of present day, 38 states have the amendment ratified.

“It is not binding on Congress, the courts or state legislatures, and it [Constitutional Amendment Process] will not slow down the momentum toward final ratification of the ERA,” the organization’s website states.

SIU professor of property law, Sheila Simon, frequently works with the board at the Women’s Center in Carbondale. The center helps victims and survivors of crime, sexual assault, and violence in Jackson County, Simon said.

Simon said the main reason America needs the Equal Rights Amendment is to have women’s safety set in stone.

“The reason we need that is that there are lots of protections that we have that are given to us by statute,” Simon said. “That’s great to have rights against discrimination at work and in housing and lots of other areas, but it’s not the same thing as having it protected by the Constitution because the Constitution is permanent, it’s a fixture for us.”

Simon gave the example of if America were to take a drastic conservative turn women wouldn’t have an amendment to protect their rights since statutes can change.

“Really just having the amendment there would be a great protection. I don’t think it would necessarily cause change right away,” Simon said. “It would just create a better backstop.”

Simon said she loves the efforts made to revive the amendment now and even if challenges come with it it’s good that people are paying attention.

“I think we’re moving all the time slowly towards getting ourselves into a position where we really feel that men and women have equal rights and are equally capable,” Simon said.

According to the federal judges’ newest ruling on the ERA, the newest ratifications of the amendment still did not make the deadline to be a part of the Constitution.

Retired Illinois Representative Steve Andersson from the republican party has been fighting for the ERA since he was a freshman legislator in Springfield, Illinois.

Andersson said a lobbyist came to him to warn him about the ERA saying it would enhance abortion rights. After Anderson did his own research he found out it was the opposite of that.

“It was an attempt to really keep women in their place so to speak from a very 1950s perspective,” Andersson said. “ I don’t appreciate being lied to, and so they accidentally created the biggest advocate for the ERA that they could’ve ever imagined which was me because then I took it on as a personal issue that I’m going to pass this.”

Andersson said he’s not just trying to get it passed for the women in his life, but for everyone. Everyone deserves a seat at the table so there can be a more diverse say in decisions.

“Make that room full of both women and men, people of color, the LGBTQ community, bring all of those diverse experiences into it, and then imagine the explosions of creative ideas that can come to any solution,” Andersson said. “ So for me, this is very much an issue that enhances our whole community; it’s not just about women, certainly that is the prime thing, but it really enhances all of us.”

Andersson was one of the representatives who helped the ERA pass in Illinois in 2018 after asking then House sponsor Louis I. Lang to be the chief co-sponsor.

“I was very proud to garner the votes on my side that we needed to pass the bill and by doing so we made Illinois the 37th state to pass the ERA,” Andersson said.

Andersson’s journey didn’t stop in Illinois going to many states across the country to make people more aware of the importance of getting the ERA passed.

Andersson said he was in Virginia when the amendment was passed, which was the last state the ERA needed.

Andersson said it was great to be there when it happened and a lot of good feelings. One thing Andersson highlighted was the big role that Delta Sigma Theta Inc. women and African American women had in passing the ERA in Virginia and Illinois.

“The Deltas were there at the beginning. They were historically like excised from the history of the ERA,” Andersson said. “I was so grateful to them because it was their hard work that actually pushed it over the line in Virginia. In Illinois, we did not focus enough on the work that the Deltas and the African American women could do. We almost lost because of that.”

One of the main problems that keeps the ERA from codified into law is the deadline, which has expired. The deadline was in the preamble and not in the actual bill where the writers of the amendment knew that it couldn’t be enforced, Andersson said.

“The deadline is what we’re working on right now in Congress. Last week House Joint Resolution 17 passed the U.S. House […] with overwhelming Democratic support and four Republican individuals voted for it as well to remove the deadline,” Andersson said. “ [It] goes to the Senate next and hopefully we can get it heard now that the Democrats are in control, and if that’s done then the deadline ceases to exist.”

What the ERA would do for women is boost the standard up to where it should be, which is on the same level as the evaluation of race, that would put it under strict scrutiny, Andersson said.

“Women have waited really forever,” Andersson said. “ I’m very proud to play a supporting role to so many women who carried this burden and I’m proud to be a part of it, but I’m prouder still to watch the women who are advocating for this do it for themselves because they can.”