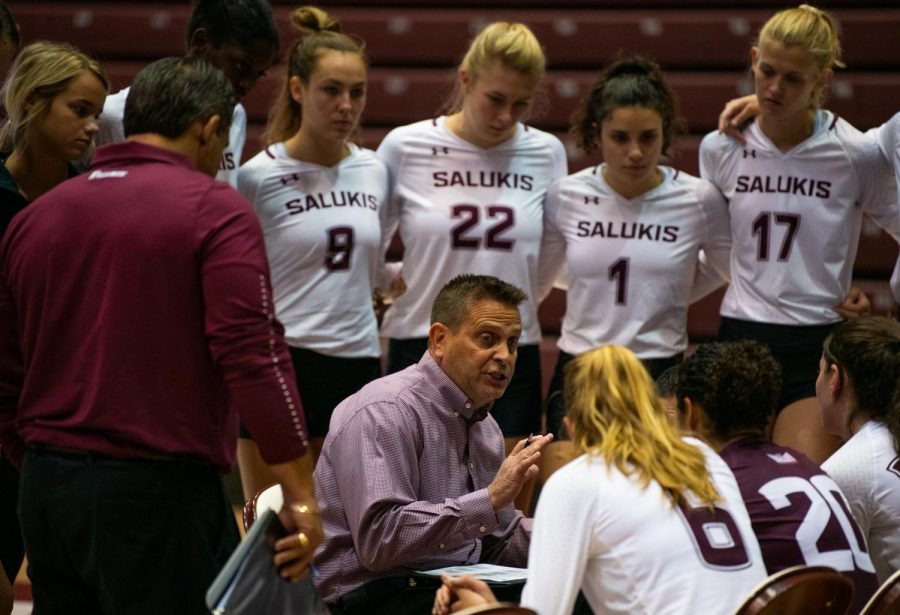 Head Coach Ed Allen speaks to the team during a time out on Saturday, Sept. 7, 2019 during the Salukis’ 3-1 win against the Southeastern Louisiana University Lions at the Banterra Center.

The Saluki volleyball team finished their season on March 28 with a loss to Illinois State. The team went 2-18 overall and only won one Missouri Valley conference game.

The two games SIU won were against the University of Memphis on Jan. 23 and Valparaiso University on Feb. 14.

Southern went to five sets with both teams and the Salukis led in blocks with 13 total against Valpo and nine against Memphis.

Redshirt senior middle hitter Emma Baalman led the Salukis in kills with 146, while freshman middle hitter Imani Hartfield  had 139. Baalman also led the team in blocks with 46 with Hartfield close behind with 44.

“Unfortunately we weren’t able to get the result that we wanted. We have a lot of potential but I think with 10 newcomers it was hard to mesh with people that we haven’t been able to get in a groove with,” freshman outside hitter Tatum Tornatta said.

Head coach Ed Allen said it was a rough year and was hard for the team to interact and do team building activities because of COVID-19.

“I think the 10 new players have improved in understanding what it takes to be extremely successful at this level, not only in terms of physicality but in preparation that is involved on the daily basis,” Allen said.

Tornatta said with a lot of young people on the team it is hard to know about the experience of winning and she thinks over the years they will get better at it.

“I feel like coming in with a lot of new people is hard to make a quick change. I think progress is key and we saw a lot of progress,” Tornatta said.

During the season, Tornatta said the team struggled with consistency and stitching together a lot of points.  They have learned lessons from the games they lost and they can use these lessons for the future.

For example, they struggled with finishing games: in the second game against the University of Northern Iowa the Salukis were up two sets and UNI came back and won the final three sets.

“We’d like to think that we are going to improve each week that we are out, there have been weeks in which that happened and weeks where we’ve taken a step backward,” Allen said.

Allen said the new players improved in learning to transition into what it is like playing at the college level and to prepare for a game as much as they can.

“Mentally, I think at this point, it’s tough. You have to hate to lose more than you want to win and I think that we’ve really learned that we never want to see a season like this again. […] I think next year is going to be a big year in change,” Tornatta said.

“We’ve really been working on trusting our training, we’ve put the work in in practice and we put the work in outside of practice and in the weight room. We should be able to fall back on that training and I think we needed to work more on putting together a bunch of points,” Tornatta said.