Out of adversity comes friendship for SIU quarterback room 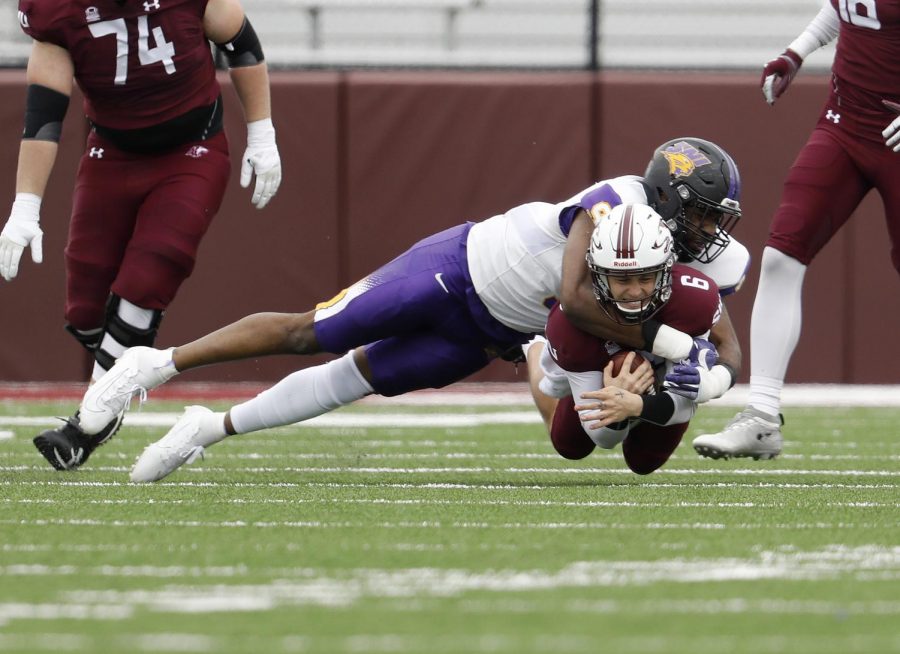 Saluki QB Stone Labanowitz braces for the impact as he’s brought down by Panthers defensive lineman Brawntae Wells during the Saluki’s 17-16 win on Saturday, March 13, 2021.

This year’s Saluki football team has faced injuries, an irregular spring season, and the mantra of bringing SIU back into the playoffs.

In addition to these, the program has tested their depth at quarterback this season with three different members starting in the position since their lone game of the fall season on Oct. 30, 2020, through their most recent game against Missouri State on Mar. 27.

The Salukis are off to a 4-3 start and 3-3 in the Missouri Valley Football Conference, and have not only had success amongst three different quarterbacks: they have found friendship.

Lyles would cement his place as the starter in the 2019 season, as he would lead the Salukis to a 6-4 record and earn the title of starter to begin this season in 2021.

“When he got the call and finished out the season, I think that was tough for us mentally,” Labanowitz said. “Me and Karé talked about it last week, a long one on one talk, just the ups and downs that we’ve had personally. We’ve been able to build a friendship out of a weird situation.”

Out of the friendship and the conversation which happened, Lyles and Labanowitz have begun working together to make each other better.

“Lately, [for] these past few weeks, we’ve actually been watching film together,” Labanowitz said. “It’s pretty good watching film; he sees a lot of stuff that I don’t see, we kind of pick each others’ brains.”

After Labanowitz got the call to start, it was at the prompting of Lyles which caused them to start watching film together.

“Two weeks ago, when I got the call to start, [Karé] was like, ‘Hey why don’t we start watching film together?’” Labanowitz said.

The quarterback spot, unlike other positions on the football field, is typically only one person playing in a game; other positions have backups who get opportunities to play throughout the game.

“They’ve really, the past two years I think, developed this really strong relationship with each other,” Blake Rolan, the quarterbacks coach and offensive coordinator said. “You’re competing to play. It’s unlike other positions because there’s only one that will play in a typical game, whereas other positions have backups that will play.”

With only one player playing in most games, it  can breed competition between the players and sometimes even jealousy.

“It’s just not normal to have zero animosity in a quarterback room,” Labanowitz said. “I think we’ve hit this plateau, euphoric spot. I don’t know how to put a finger on it. We’re in this honeymoon phase, we’re so proud of each other.”

After Lyles went down with an injury in the first half of the game against North Dakota, sophomore quarterback Nic Baker came in and played well, leading the upset in the next game against then number one ranked North Dakota State on Feb. 27.

Baker was the starter up until he was injured in the first half of the Northern Iowa game on Mar. 13, when he pulled up limping on a running play.

From Lyles to Baker, and now Labanowitz, who got his first start of the season against South Dakota State and will be the starter against Missouri State on Mar. 27.

“I have a different mindset, which is odd. I feel more loose and free,” Labanowitz said. “What I’ve gone through here as far as having back surgery, then having that shoulder injury, getting the start I guess it’s more than two years ago now to coming back through it.”

In the same way Labanowitz had to come back from injury, he describes himself as a fighter on the field.

“It’s cool for the sideline to see how hard I’m fighting out there, I think that’s the main thing I bring to the table is a certain fight” Labanowitz said. “This kids gonna give us everything that he’s got.”

Labanowitz would finish the game against the Bears throwing for 270 yards and two touchdowns while picking up two sacks.

Junior inside linebacker Bryson Strong and Labanowitz have their fair share of poolside conversations, in which Strong said fighting for yards like Labanowitz does motivates him.

“I’m very close to Bryson Strong on the defensive side. I was talking to him last night, we have these talks by the pool,” Labanowitz said. “We talk for hours about football and that’s just one of the things that he brings up to me and tells me I need to keep doing forever.”

As far as what Labanowitz brings to the table, according to Baker he’s the magician, always being able to find a way to make plays.

“Stone, he’s a little mastermind back there, a little magician you could say that,” Baker said. “He always finds a way he’s got a little knack, not getting sacked, getting balls out. It’s kind of cool to watch.”

Lyles, Labanowitz and Baker have not always had the friendly relationship they have now.

“With Karé getting here in January two years ago, the dynamic in the room at that point was really all about themselves,” Rolan said. “‘I want to start, me, me, me.’ Two springs ago when they were competing for a job, it’s always us against them.”

This past fall is when the change from ‘Me to we’ as a group occurred, Rolan said, as the three of them being together the past two seasons has helped.

“Definitely saw a change from two springs ago, until this past fall. They’ve been together now, they knew each other’s quirks, their personalities,” Rolan said. “They weren’t concerned about what the other one was doing.”

When watching a game, it can be difficult to see everything happening on the sideline, and Rolan said there is constant communication between each of the quarterbacks on the sideline.

“What the normal person doesn’t see is the constant communication, trying to win a game, trying to figure out what’s the best play,” Rolan said. “[They’re] in each other’s ear, talking to them, asking each other questions.”