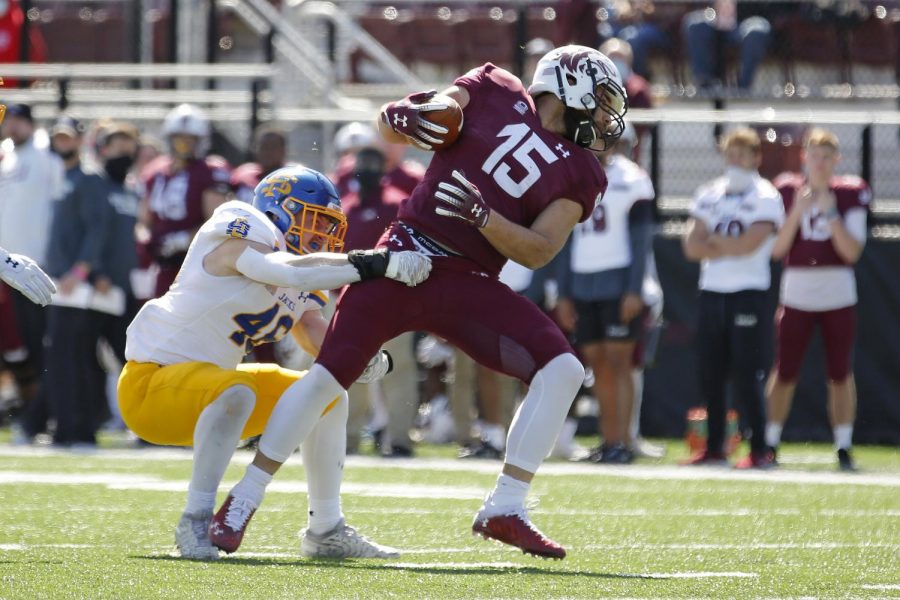 Saluki running back, Javon Williams Jr., tries to break free of the Jackrabbits' defenseman’s grip during Saturday’s game at Saluki Stadium on March 20, 2021. SIU lost to South Dakota State by the score of 44-3.

Southern Illinois football dropped their latest matchup against South Dakota State University in a tough 44-3 loss on March 20. The Salukis (4-2,3-2 MVC) look to claim their next win on March 27 against Missouri State University  (3-4,3-2 MVC) on the road.

SIU opened the game by taking a 3-0 lead, but South Dakota State responded with 44 unanswered points to blow out the Salukis. Turnovers played a huge role in the loss, as SIU committed four turnovers on three interceptions and a kick return fumble. Senior quarterback Kare Lyles entered the game as a backup but that didn’t rally the Salukis.

Saluki head coach Nick Hill spoke during his weekly press conference on March 22 about the team’s performance over the past weekend.

“Last Saturday didn’t go the way that we wanted or planned and that’s what happens whenever you play a really good football team and don’t execute at a high level,” Hill said. “But we’re looking forward to responding this week, and feel good about where our team’s at and just as far as their approach and their attitude.”

After their loss on Saturday, Hill said the team was unable to find their rhythm

“Every phase we got beat, we got out-coached; we’ve all got to be better,” Saluki head coach Nick Hill said. “We just couldn’t get into any sort of rhythm.”

Hill said sophomore quarterback Nic Baker will miss the rest of the season, and junior Stone Labanowitz will be the starter again this week.

Junior wide receiver Avante Cox is the team’s leader in receiving yards and has also added over 100 rushing yards this season.

Hill discussed using Cox often in the run game and how he thinks it could help Cox if he reaches the NFL.

“You see it more and more I mean, you definitely see it in the NFL that’s why I think that, you know Avante will definitely have an opportunity to play at the next level because you see every team use sweeps,” Hill said. “You watch the Rams and you know you watch the 49ers and you watch all these teams that kind of have guys like Avante that can do a little bit of everything good,” Hill said.

Illinois State announced on Sunday March 22 they would be canceling the remainder of their football season. SIU was scheduled to play ISU on April 3, and Hill discussed his reaction to the news.

“Yeah, I was obviously disappointed to see that,” Hill said.. I mean, I don’t know. “I’m proud of our group for that and the resiliency that they’ve shown from the beginning and Illinois State was this way to calling out teams for not wanting to play week one. We didn’t practice, you know, because of the storm and all that and we went and played. We took one on the chin week one and we responded. That’s what has made this team as resilient, that’s what gives me confidence in the team this week,”.

Hill also acknowledged that the missed game could have an effect on the Salukis’ playoff chances, but said he isn’t worried about it.