The history of St. Patrick’s Day in Catholicism 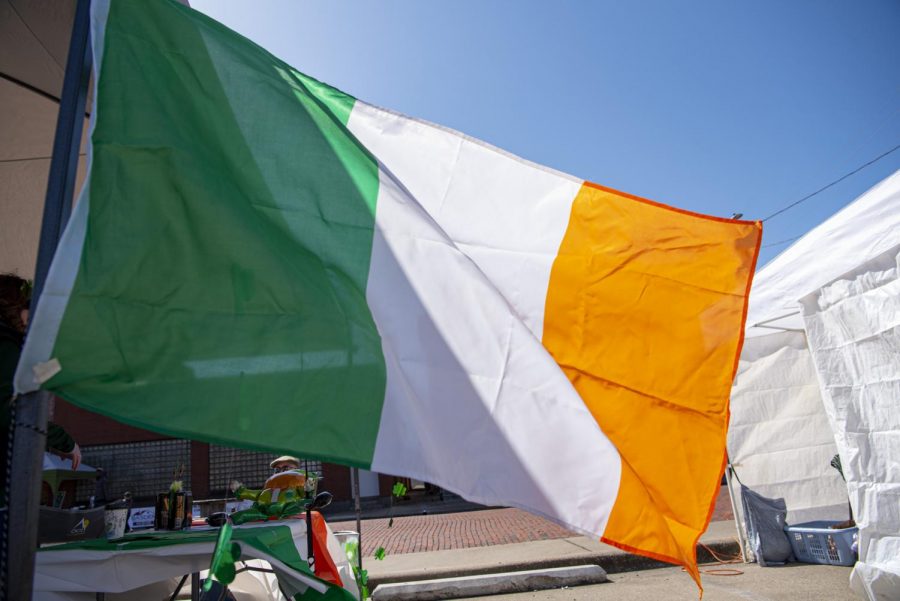 An Irish flag flies in the wind during the Murphysboro St. Patrick's Day Celebration on Saturday, March 20, 2021 in Murphysboro. This year, the events were scaled down compared to previous years due to the COVID-19 pandemic, but the Murphysboro Chamber of Commerce still put on events that could be enjoyed safely.

St. Patrick’s Day is a celebration of Irish culture known for the color green and depictions of the shamrock. But what of the real story of the titular saint? Who was St. Patrick?

Because of his time spent persevering through slavery, St. Patrick is seen as a symbol of perseverance and survival among Catholics and Irish natives. His unwavering spirit in the face of adversity has been championed by the Irish people throughout history.

The Irish have faced difficulties including slavery, and the potato famine of the 1800’s. Throughout these trials, St. Patrick became a guide for Irish Catholics in their times of need.

A myth largely associated with St. Patrick is that he drove the snakes out of Ireland upon his return as an adult. In the Christian faith, snakes are believed to be a symbol of Satan because of his appearance to Adam and Eve in the form of a snake in the book of Genesis. By sharing Christianity with the Irish people, St. Patrick symbolically drove Satan out of Ireland thus making it holy.

Another achievement of St. Patrick is the introduction of the three-leaf clover as a symbol of the Holy Trinity. “It’s three leaves on one stem, three persons in one God. So that’s what he used to teach the faith to the people who were not Christian,” Father Flannery said.

As Bibles were not readily available like they are today, this teaching tool became invaluable to St. Patrick in his attempts to spread Christianity.

As is the case with many saints throughout history, St. Patrick’s deeds in life and the influence he had in bringing people over to the faith are what secured his nomination as a saint. Today, the process of nominating saints is far different.

“The process is changing. It usually takes a rather long time and usually, a miracle is attributed to their intercession to God,” Father Flannery said.

Modern examples of saints that defy this standard include Mother Teresa and Pope St. John Paul II. As time has passed, St. Patrick has become a symbol that exists outside of the confines of a religious context.

He is celebrated by Catholics and Protestants alike as a symbol of good fortune, prosperity, and perseverance. “A lot of people who aren’t Irish still celebrate just because of the tradition. That was the thing about St. Patrick, with all of his hardships; especially being a slave in Ireland originally, the Irish people and non-Irish alike look up to him as an example that they can persevere,” Father Flannery said.

Staff Photographer James Allen can be reached at [email protected] or on Instagram at @skyclopsphotojamboree.