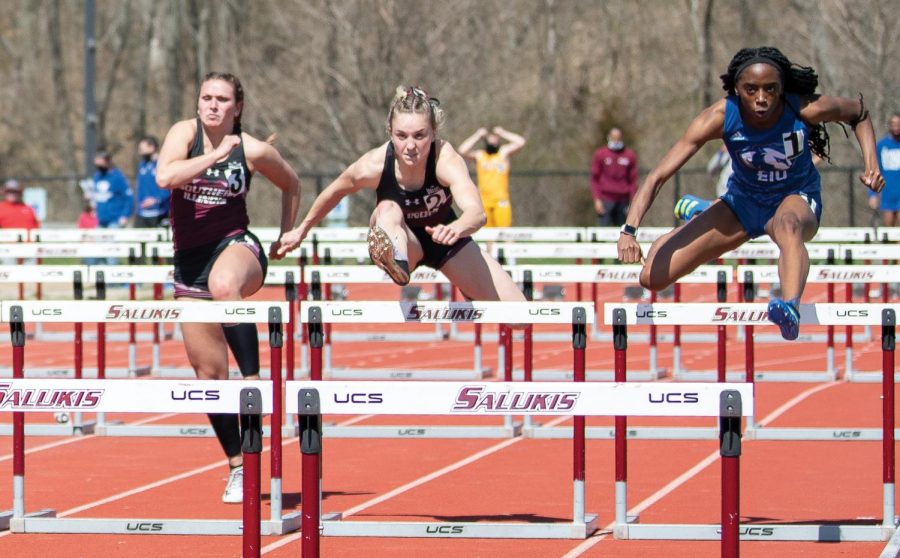 Savannah Long takes a jump in the 100-meter hurdles race on Saturday, March 20, 2021, at the SIU Lew Hartzog Track and Field Complex in Carbondale, Ill.

On Friday, SIU won three of the four contests competitions, including men’s discus and men’s and women’s triple jump.

Daniels jumped a distance of 11.87 meters in the women’s triple jump, followed by fellow Saluki sophomore Britney Mosby with a 11.57 meter distance.

Senior Ricky Hurley won the men’s discus competition with a distance of 49.94 meters, defeating the second place distance by over two meters.

Southern Illinois was the winner of 10 of the 34 events on Saturday.

Sophomore Cole Taggart won the men’s shot put for SIU with a distance of 15.51 meters.

Hurley added another win on Saturday, this time in the hammer throw, with a distance of 65.23 meters. That was over seven meters better than the second-best distance in the event.

In the javelin throw, the Salukis’ junior Emma Sexton won with a distance of 40.49 meters.

In the women’s shot put, indoor national finalist senior A’veun Moore Jones was victorious with a throw of 16.56 meters. SIU also took second in the event with a 14.56 meter throw from sophomore Bri’Yan Robinson.

The Salukis took the top four spots in the women’s hammer throw and were led by indoor national finalist Shauneice O’Neal ,who won the event by six meters.

Sophomore Kyle Lind picked up the win in the men’s 110 meter hurdle event with a time of 14.33 seconds.

SIU senior Savannah Long got a win in the women’s 400 meter hurdle event with a time of 1:02.26, nearly three seconds clear of the second place position.

The 200 meter dash was won by SIU in both the men’s and women’s races. Freshman Iaunia Pointer got a time of 24.19 to win the women’s event. Junior Corey Sherrod got a 21.85 to narrowly pick up the win in the men’s event.

SIU finished third in the men’s competition behind Eastern Illinois and SEMO by just half a point for second.

The next meet for the Salukis will be Friday, March 26, and Saturday, March 27, in Oxford, Miss. at Ole Miss.