Coach Hill speaks on the No. 5-ranked Salukis as they prepare for another Top-10 opponent 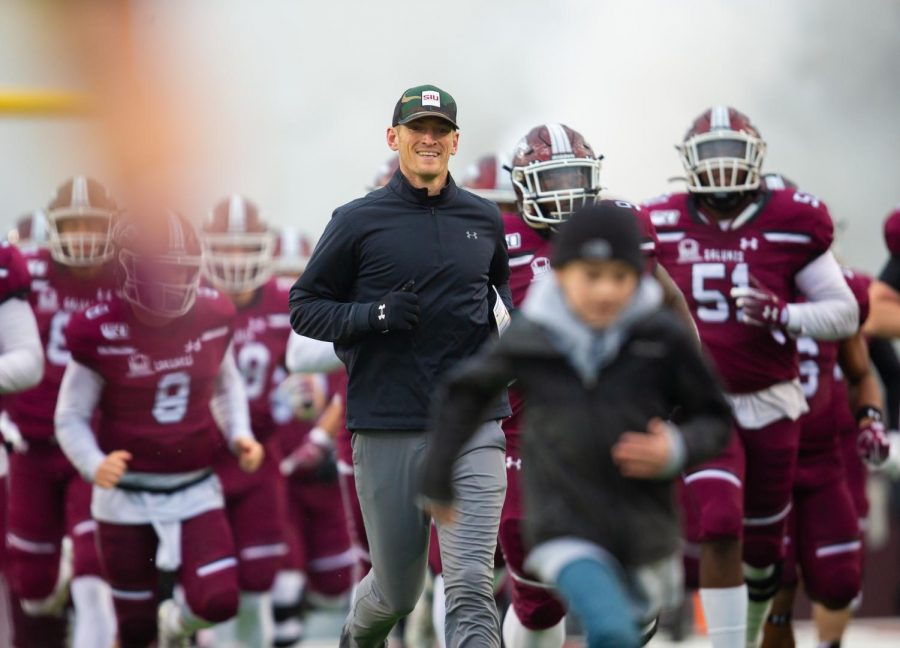 Head Coach Nick Hill runs onto the field on Saturday, Nov. 23, 2019, during the Saluki's 7-21 loss against the North Dakota State Bison.

SIU head football coach Nick Hill had the weekly press conference on March 15 after the Salukis (4-1, 3-1 MVC) defeated the No. 4-ranked Northern Iowa Panthers on Saturday. The Salukis closed out the 17-16 win after the Panthers missed a 29-yard field goal in the final minute of the game.

After the win Hill said he was proud of the team’s performance.

The win improved SIU’s No. 10 ranking five spots to now No. 5, according to a ranking by Stats FCS.

Hill said the team is excited to be playing another home game this weekend as they look for a win over the No. 6 South Dakota State Jackrabbits.

“It’s exciting to be back at home this week, obviously coming off an exciting win and tough game, we knew that it would be. Just an all around great football game and glad that we came out on the winning end. So our focus now is to turn to another great opponent,” Hill said.

The Salukis have seen three different quarterbacks get playing time after senior Kare Lyles was injured in week one and sophomore Nic Baker injured in the Northern Iowa game. junior Stone Labanowitz then backed up Baker and led the Salukis to the comeback victory against Northern Iowa_. Hill said the team likes where they’re at but doesn’t know yet who will start this weekend.

“Obviously with Nic, he’s gonna get checked out by our doctors, obviously I mean Nic’s a tough kid. I mean if you’re watching the game, he was in a lot of pain on Saturday, so he’s a resilient kid, tough kid. So we’ll see how the week goes for him.

Hill said Lyles is in preparation to return to the field as well.

“Kare dressed for the game and was cleared on Thursday and just hadn’t practiced much, so you know, Kare actually could have, in a worst-case-scenario got out there and played on Saturday. So Kare is back healthy and then, Stone you know, went in and did his thing in the second half,” Hill said

The Jackrabbits’ starting quarterback this year is true freshman Mark Gronowski, and Hill said he’s impressed so far with what he’s seen of him.

“He’s gonna be a really good player for a long time in this league. I mean he’s, you know, earned the job for a reason up there, they got a couple other good quarterbacks on their roster and, you know, there’s a reason why they chose him to be the starter. He’s going to keep it as a true freshman too, he’s going to just keep getting better,” Hill said.

SIU will play South Dakota State on March 20, and kickoff at Saluki Stadium is at 12 p.m.