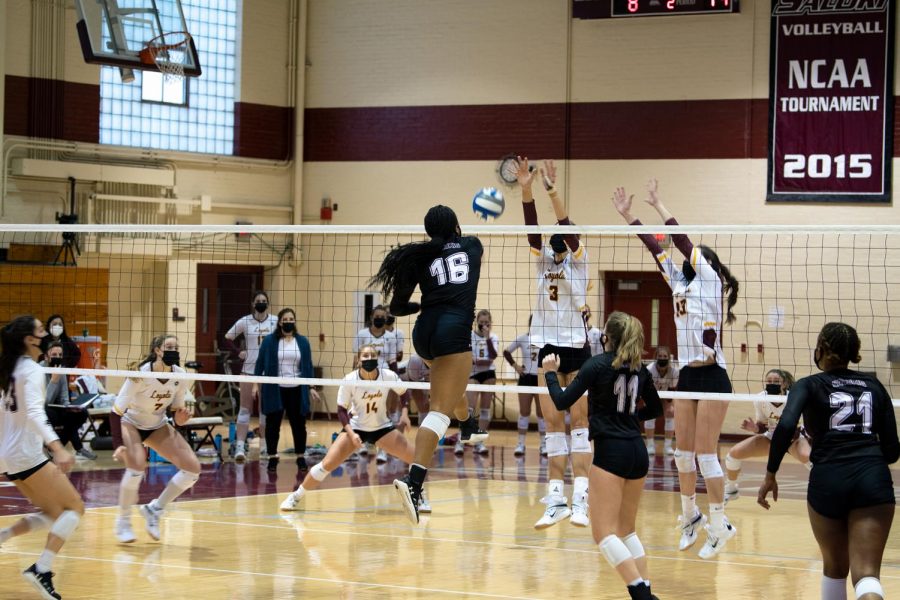 Imani Hartfield (14) spikes the ball towards the undefended area in the opponent's side of the court in the game against Loyola University on Monday, Feb. 8, 2021, in Davies Gym at SIU. SIU went on to lose all three sets.

The Salukis were able to rally from multiple match points in the third set as they trailed 24-23 and 25-24. Kills by freshman outside hitter Taylor Morgan and Hartfield helped the Salukis win the set.

SIU was led in kills by redshirt freshman outside hitter Alex Washington with 15, and freshman middle hitter Imani Hartfield added 13.

Evansville got a match-high 22 kills from junior outside hitter Alondra Vazquez, sophomore opposite hitter Melanie Feliciano got 19 for the Aces.

The first set was tied at 15 before Evanville put together a five-point run to get a 20-15 lead, which helped them get the first set. The set was closed out on a Saluki attack error.

SIU looked to rally in the second set and once again, the teams were tied late, this time at 18. A 5-1 run gave Evansville a lead and they closed out the set 25-21 on a Feliciano kill.

After the comeback in the third set by SIU, Evansville looked to bounce back and close out the match. The Aces got on a run after a close start and got a match point at 24-19. However the Salukis picked up three straight points on kills from Morgan, Washington and then redshirt senior opposite hitter Emma Baalman to cut the deficit to 24-22.

A Feliciano kill closed out the fourth and final set to give the Aces the win at 25-22.

SIU looks to bounce back tomorrow, March 15, when they once again play Evansville in Indiana at 6 p.m.