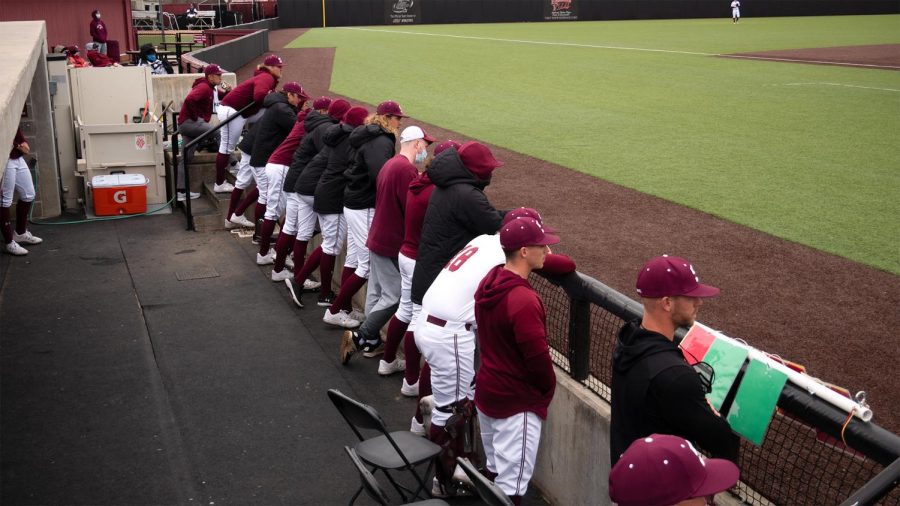 Members of the SIU Men’s Baseball team cheer on their teammates from the dugout Sunday, March 14, 2021, in Carbondale, Ill.

SIU baseball opened their first weekend of MVC play taking three wins out of four over the Evansville Purple Aces.

Down 5-1 in the fifth inning it looked as if the Salukis’ winning streak would end at 17 dating back to last season.

With the bases loaded in the fifth inning, sophomore outfielder Tristan Peters lined a single up the middle that plated two runs.

Sophomore outfielder Vinni Massaglia followed with a three run home run, which proved to be one of four home runs hit in the inning.

Senior first baseman Philip Archer and junior outfielder J.T. Weber both followed Massaglia with home runs to make three home runs back to back to make it 8-5 in favor of the Salukis.

“The offense can get you in multiple ways,” Saluki head coach Lance Rhodes said. “We don’t swing at a ton of bad pitches right now. We have some thunder from top to bottom.”

Freshman outfielder Evan Martin would get the fourth home run of the inning, after a sacrifice fly by senior infielder Ian Walters brought one run in to make it 11-5.

While the Saluki bats did damage, the starting pitcher of the game sophomore Mike Hansell struggled and was relieved with two outs in the third inning by sophomore pitcher Tanner Lewis.

Lewis came in and kept the Aces bats at bay pitching three and two thirds innings allowing only one hit while striking out five.

“Tanner came in and started slamming the door and throwing up zeros,” Rhodes said. “We started chipping away offensively and found some barrels. We exploded there with four home runs in one inning. The one thing we always tell our guys: Never panic. As long as we play for 27 outs, we have a chance to be successful in the long haul of an entire game.”

SIU added three more runs including one more home run from Weber in the seventh inning to win game one 14-5.

Day two featured a doubleheader, which is new this year to the MVC with a four-game format in league play, the first game being played to seven innings and the second to nine.

In game one, the Salukis came out early in the first inning with a home run by Martin to lead 1-0 after one.

Junior infielder Grey Epps would add a three-run home run in the second inning to give Southern a 4-0 lead after two innings.

The Aces would get two within one of the Salukis by scoring two in the fourth and one in the sixth inning.

SIU would add an insurance run in the sixth inning when Weber and Walters both singled up the middle Weber found himself on third and Martin would single up the middle to bring Weber home.

Junior pitcher Trey McDaniel relieved sophomore Ben Chapman in the sixth inning and McDaniel closed the door on the Aces in the seventh with a ground out to win the game 5-3.

Game two of the doubleheader looked like it would also be a pitchers’ duel, as it was tied 2-2 after the Evansville half of the third inning.

In the Southern half of the third inning, Massaglia would hit a home run to left field which would bring home Peters, Epps would hit a sacrifice fly to center field which scored Archer to give SIU the 5-2 lead after three innings.

SIU would add on three more runs in the fourth and fifth innings to pull out to an 8-2 lead.

In the seventh inning senior pitcher Gage O’Brien relieved senior pitcher Brad Harrison, and O’Brien loaded the bases by walking his first two batters faced and hitting the third with a pitch.

Harrison finished the game with his season high in strikeouts with nine, pitching six innings and allowing three hits which turned into two runs.

“Chapman threw well in the first game, and Harrison threw the best he’s thrown all year,” Rhodes said. “[Harrison] really had a good breaking ball going. He’s been here and done it so many times in Missouri Valley play that he was our ideal guy that we wanted to go on a back end of a doubleheader.”

The Aces would take advantage of the situation bringing two runners home with a single to right field, O’Brien would then settle in and strike out the last batter of the seventh with SIU up 8-4.

Junior pitcher Kyle Back and sophomore pitcher Bubba Hall would keep the Aces at Bay, with Hall shutting the door on Evansville and earning the save as SIU swept the doubleheader.

The Salukis would drop the final game of the four game set 7-3, after SIU was leading 3-2 after five innings.

Evansville would knot the score up with a double down the right field lane, two sacrifice flies and another double added two more runs for the Aces in the sixth inning to lead 6-3.

The Aces would add one more run in the seventh when a wild pitch advanced a runner to third, a single past third base scored the runner pushing their lead out to 7-3.

The Evansville bullpen took over in the fourth inning and across three pitchers, they gave up three hits while striking out seven.

The loss marked the first for SIU in 375 days; SIU will be back in action on Friday Mar. 19 against Marshall with first pitch set for 6pm.