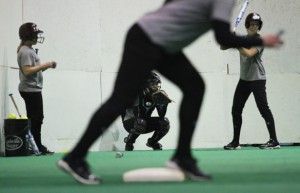 SIU finished last season with a 36-20 record but were no match against Illinois State, who hit three three-run home runs in the championship’s first three innings to beat the Salukis 13-3.

This season, however, SIU is tied with Illinois State for the top spot in the conference with two first-place votes each and 85 points overall.

Northern Iowa received 82 points to get a third-place ranking. Creighton notched three first-place votes and 80 points overall for fourth, and Drake’s 62 points overall rounds out the top five in a close vote among the teams.

Coach Kerri Blaylock said she agrees the conference’s top teams are all evenly matched, which made it hard for her to place her vote.

“Every team has its strengths,” Blaylock said.

Although it’s an honor for the coaches to consider the Salukis as a top team in the conference, Blaylock said, she only cares that they’re on top by the end of the season.

in the NCAA tournament. “Things may happen, things may

get in the way, but we want to try to get to the NCAA tournament,” she said. “That’s what you play for. We’re going to take it day by day, but that’s what we

and three pitchers from last year’s team, as well as four players who were named to the preseason all-conference team. Junior first baseman Taylor Orsburn,

at second base, posted a .272 batting average and was second on the team with

34 RBIs. Last season she was also second-team all conference, made the MVC all-tournament team and was on the MVC scholar-athlete first-team.

Spivey said she expects to be more mature on the softball field this year, which is something she has already seen from teammates.

“Our pitchers are more mature now and our infield and everything,” she said. “I think that will help us come together as a team and get us through some tough situations.”

Lang said the team’s first opponents will bring a strong

challenge, but her main concern is how her team competes.

“As long as we don’t beat ourselves, I think we have a chance,” Lang said.

“The thing that has been good about this team is that they’re a little bit looser,” Blaylock said. “They’re having some fun, and they have a little bit of character.”

The Salukis open their 2013 season Friday in Clermont, Fla. at the Dot Richardson Invitational.