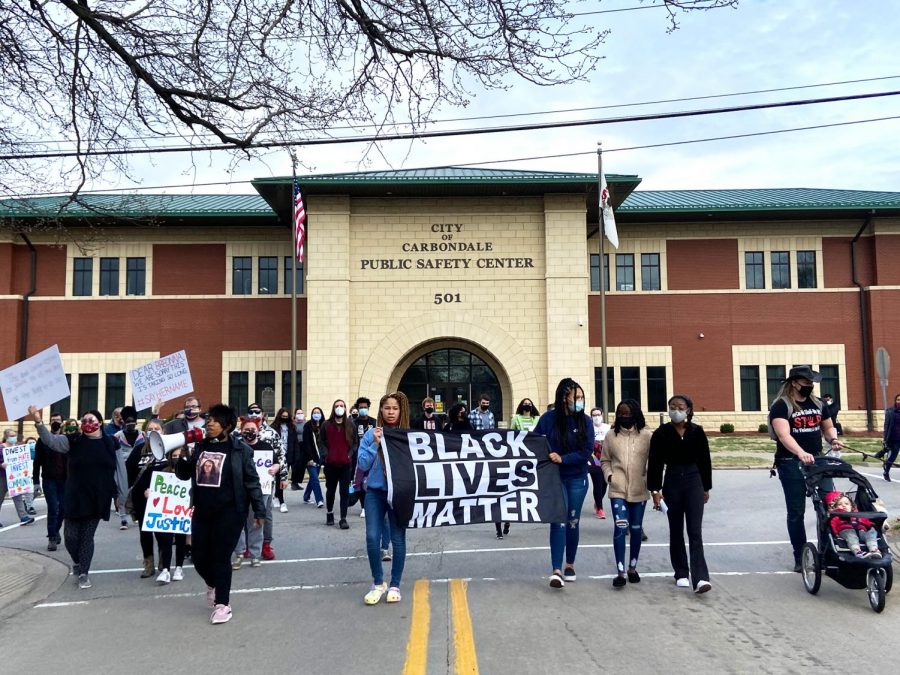 Protestors march on East College St. through downtown back to the Carbondale Pavilion on Saturday, March 13, 2021 in Carbondale Ill.

Saturday marked the one-year anniversary of Breonna Taylor’s death and Jackson county residents of all ages marched on Carbondale Main Street in her memory and to protest police brutality.

Taylor was a 26-year-old Black woman shot and killed in her home by Louisville police officers Jonathan Mattingly, Brett Hankison and Myles Cosgrove on March 13, 2020.

Hankison has been indicted on three counts of wanton endangerment for shooting the neighboring residence through Taylor’s apartment, but Kentucky Attorney General Daniel Cameron announced no direct charges would be brought for the raid.

Taylor’s boyfriend, Kenneth Walker, was cleared of shooting a police officer on  March 8, 2021.

Hosted by the Southern Illinois Unity Coalition, more than 50 people gathered at the Carbondale Pavilion to speak and march in solidarity with the Black Lives Matter movement.

As the protesters marched down East Main St., South Washington St. and South Illinois Ave., they chanted “Breonna Taylor, Rest in Power!” and “ No justice, No peace! Prosecute the police!”.

“I just feel this degree of unprotected-ness,” Mathis said, “It really goes to show that just the amount of disrespect and the lack of value of life whenever law enforcement are able to get away with things like this.”

Mathis said the charges brought  against the officers for property damage felt like another “slap across the face.”

Abigail Cullum, 30, of Herrin attended with her 8-year-old daughter, Teagan, and her  husband, Lukas, 30, to try and bring justice to Taylor.

“It’s been a year since she has passed away and justice has not been served for her,” Abigail Cullum said. “It’s important for our family and for her family that we’re here together.”

With her mother’s arm wrapped around her, Teagan Cullum said, “I want to see that even though we have different skin tones we should be treated equally because we are all people.”

“As a Black woman, I’ve seen the erasure of Black women’s death is a tragedy that is oftentimes really overlooked and it’s disgusting that our society ignores a Black woman’s death,” Love said. “I just think it’s something that people really need to pay attention to right now.”